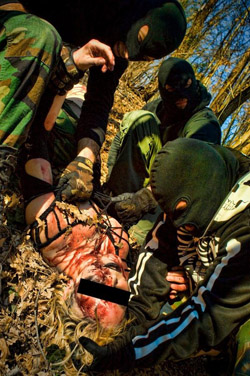 We could not find enough information about your music band. We know that you are a new musical group but we do not know how long you have been working, would you
inform us?
You can’t find informations about us because we are one of these bands that have spent one year (closed in a room) writing songs, thinking of the best possible sound and trying to find a real identity and not “throwing” informations, promotion of whtever nothing in the scene if you know what I mean.
The problem of music is that 99% of the bands first think of looking cool, smart, with a trendy photo, haircut, crappy biograpy before thinking of music and a message. We are not that kind of useless project. We have a message and we know that informations about us menas nothing to people…We know that if you have a message your music must be great because only after having great songs, a great sound people will listen to you and then will try to understand what you have to say. That’s the only way. This is not a project, this is a message and when it come to music it must be the very best. Anyway we all come from other bands that have toured worldwide, released albums with important labels and worked with outstanding producers. We are not young, this is an important information, since we are not here for the reasons that push 99% of the new bands…We don’t give a shit about success or people recognising us…
This is the only information I can give you…The rest means nothing to people. The most important thing is music and the message. The goal is written in our bioraphy: “The message about God intended as nature (animals and the perfection of their creation) is our faith. We are the hand of God, we’re here to bring the animals’ message to liars, weak individuals, prostitutes, drug addicts, nymphomaniacs….” We are not an organisation, we are just a band that will save many animal’s life in the name of GOD that is nailed on a new kind of Cross, not inverted and different…A new GOD that really cares about animals. This is Crosscore. Standing at human’s ways of decodification of religion it never happened that religion cared about animals or took inspiration from them…This is the biggest mistake of human race, and will drive it to the end. Animals teach us things every day and people don’t fucking care about them….People kill them.

We are used to see your masked faces in the photos, your names are secret. Although we made a look at your biographies we do not know anything about where you are from. Only in myspace, it is written that you are from Sweden.Perhaps, we know you from another groups.However, we cannot know who you are, what is the reason for this?
Well, as I told you in the other answer, it is not relevant where we came from or who the hell we are since our message (with the music) is the only important thing. Our faces are not good looking, we have not the cool trendy faces and young skin so no reason to see them. Our faces are signed by the grief and pain amd our names are just crappy normal names…MarK, Jeffrey, Greg … Whatever. Some of us may be from Sweden, but if you really want to know we are all from differrent countries and you may know us from other bands we played in if you are in the scene. That’s all I can say. We have signed an agreement with blood and will never unveil our indentities since THE WAY OF PURITY is our new collective identity. 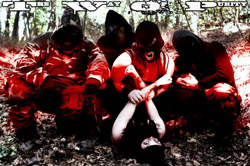 In what sense are you different from other music bands, can you explain us for our readers?
A great and really dark film director decided to produce a film about our real story and when it will be ready a lot of things will be clear for you guys that are interested in our project (we will always thank you for that). The only thing I want to say now is that a member of the band committed suicide in the name of this project and this changed us a lot, making this band something that never existed before…After the loss of the member the spiritual and ritual side of our message became so strong but it is not easy to tell with words. Just wait and see the film, it represents our story.

If we talk about your lyrics?
Our lyrics are part of the message and try to explain how we see Nature, Animals, God, Evil, Good, Religion, Cross, Negative, Positive, Satan, Christ, Suicide, Death, Life…
Many people think that good is good and evil is evil, but we know that (as an example) these two “things” are the different sides of the same face. Good cannot be without evil…White cannot be without black…Men cannot be without God. Our lyrics can be described with two words: REWRITE RELIGION. 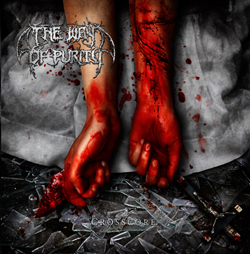 “Crosscore” will be your first album. When is it going to be released? which company did you work with for this album?
Yes, Crosscore is our debut album and must be released before we leave for the tour (march the 18th), but we still have to wait for the film that will be included in the album (before we decide a release date). We still don’t know wich company will release it, we have some offers but to be honest we will work with a company that have acted for it’s integrity first. We talked with the big labels that really liked the album but the uncommercial side of our nature doesn’t match with marketing strategies.There are two labels (one bigger and one underground) that we like and we’ll sign with one of them…Very soon you will know that.

Can you tell us about recording process of your album?
Our album has been written by me (xWITHOUT NAMEx) with a friend of mine, that is not in the band, during one year in a secret place (not even my friends know about that). All the band members halped me from time to time in the songwriting and in August we went in Studio for the drums, then in another studio for the rest of the instruments.
I have produced the album with xJeffreyx (Basslayer).
In september Chris Donaldson from Cryptopsy mixed the 10 songs, giving them a strong and creative push and Mika Jussila mastered the project in in Finland.
Chris did a great job and we will always thank him, we consider him part of the band. 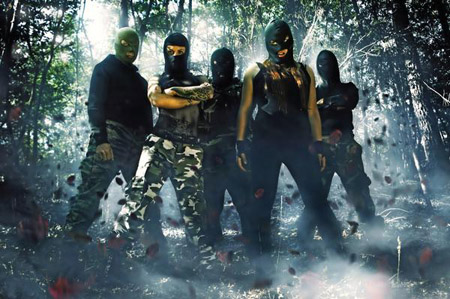 You have a very busy concert program after releasing of your album, it is interpreted that you will be touring together with Negura Bunget. Negura Bunget would come to Turkey but they could not. I have made a research about that, now a disagreement has happened and they could not come again and you too. Is there progress on this case?
We decided to tour with Negura Bunget because they are a great band and we have a sort of similar concept…We asked Negru let us join their tour, he listened to our music and said yes. We really like them and we are so excited to share the stage in the whole europe. Honestly I don’t know about their disagreement with Turkey. Of course we wish them to tour in Turkey soon. 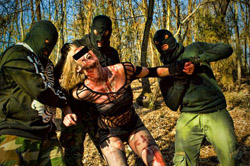 Your faces will be masked in the concerts, I think. I made a look at your promo photos, is that what you planned scene shows?
Our faces will always be covered (masked is a marketing word and it doens’t fit to our case), at concerts, in studio, in our room. To cover our face is not a “need” is just part of our music and we could not play with uncovered faces. The live show will be full of rituals since we will try to reach purification and catharsis during this tour. That’s the reason why we will play live…Purification and transmission of the message.

What are your plans or the time after the concerts? Do you plan to record a new album or do something else?
Yes we started in september 2008 and we will never stop. We are working on the new songs since we have some time before we leave on tour. The artwork is ready and everything is done with “Crosscore”. We just have to shoot the final scene of the film during these days, then we’ll think of the future.

That is all. Is there anything else that you want to say to our readers?
Thanx a lot Fatih, we thank you so much for the interest in our music. You will not see many interwiews since we will only speak to the people we like and not for marketing since xBettyx before leaving us asked this: “Please bothers and sister, when I will be away only talk to the pure ones…Don’t contaminate or corrupt the message of the way of purity with unbelievers.” That’s what we’ll do.
Welcome to the precarious balance and the ancient code of the Way of Purity, that might hold the key to salvation…Soon you will know the truth that will set you free.