Greetings. How are the things in Greece? How is the economic crisis effecting your lives and music?
Nick: Well, it’s common secret that Greece is going through one of its hardest times of its latest history. Many people have already lost their job, the salaries have been reduced while the prices are going…upstairs. Concerning music, the most serious effect of this situation is that less and less people are attending to any live show because of the expensive tickets. I think that the main results of this economic crisis will be visible this winter and it’s going to be hard, for sure. 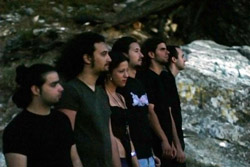 How did the thought of making doom/death develop? Was everyone of the same opinion or did someone want to make doom when the other wanted to do death metal? And did you end up making doom/death by synthetizing the two?
Music tastes vary a lot between the Shattered Hope members. For example, you can find one that enjoys electronic/techno music while the other likes grindcore. But, the decision to follow the paths of doom/death metal was agreed by everyone. So, there wasn’t any problem at all!

We haven’t much information about doom metal scene in Greece, how is the audience there, did you have any difficulties in finding members?
To tell you the truth, this music genre is very underestimated in Greece. Not many people are into it. They mostly prefer Black or Death metal. I have to say that we’ve been very lucky until now and haven’t met any problems in finding band members. I can mention two great doom/death bands from my country. Decemberance and Hedon Cries. You have to check them if you haven’t already.

Which doom/death band have you been effected from most? Maybe, you got into music because of them? 🙂
I think you are able to guess my answer. My Dying Bride. More or less, everybody can understand their influence on most of doom/death bands around the world. Some other bands that also affected us are: Saturnus, Mourning Beloveth, Anathema, but all these groups weren’t the main reason we are now in music. Nobody, I think, starts listening music with doom/death. And the reason is that this kind of metal demands good searching, patience and an open mind.

Lets talk about recordings and studio conditions. These things are very expensive here, is it the same in other side of Aegean Sea?
The same here. If you have a band and you want to record an album with your own efforts is very expensive and difficult. You have to sacrifice many things in order to have the expected result. With regard to our album, we are very satisfied because we took the best we could from the studio we recorded it.

How is the interest toward genres like funeral doom, doom/death in Greece? Your audiences?
As I said before, this kind of music isn’t popular here. Promoters do not pay attention to these bands. So, there aren’t many doom/death metal gigs in Greece apart from certain individual cases. I have come to the conclusion that we are more known to other countries than we are in Greece. 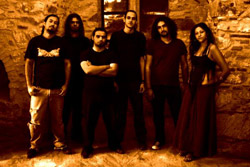 I saw on your Myspace page that you had given a concert with Mourning Beloveth and Saturnus. Are the concerts that support doom/death enough? We know that doom/death is not a very requested genre like death or thrash metal in terms of concerts. Have you been through any difficulties about concerts?
They are never enough. Consider, that these two concerts were organised by us and some friends. Nevertheless, these moves were succeeded and forced us with power and confidence to think of bringing more names of the scene. My Dying Bride is the only doom/death metal act that is fully supported by the local audience and we are very proud that we opened their show in Athens.

Your lyrics are about darkness, depression and so on. A typical situation in this genre. Is there any special reason in choosing these kind of lyrics or did you choose them because the genre of your music requires so?
I’m the band’s main lyric writer and I can’t think of myself writing in a different way. I was writing lyrics before I joined Shattered Hope and I can assure you that they were more depressive. All people have their dark period in their lives. So, I don’t think I was obligated by the genre. Through these words I express myself, my feelings, my experiences and everyone can translate them by his own mind.

You released the album with your own efforts. Is this because there is no company supports this genre, or because you didn’t want to work with a company?
No, no…Let’s make things clear. We haven’t released our album yet. When it was ready, we cut some promo copies in order to send them to companies and what a coincidence; last week we received an offer for release. We are going to announce it officially when the time comes.

Your album cover is pure, minimalistic and cold. Whose work is it? What was on your mind when designing it?
I have to say that this cover is only for the promo version of our album and a good friend of ours worked on it. Our purpose was to give a first taste to the listener of what’s happening inside. When “Absence” is going to be released, the cover and the whole artwork will be different.

Considering that you’re doing doom/death, I think you are probably into literature, philosophy, psychology, maybe anthrophology. Is there any name you follow from any of these kind of fields?
Well, those fields are able to influence not only your thoughts about music, but all your life in general. By reading this kind of books you can see things around you with a different point of view. It’s funny and interesting when you realise how many simple things were out of your mind. Speaking for myself, I’m a huge fan of Tom Robbins, Edgar Allan Poe and Sigmund Freud.

There are long songs in the album, 13 minute, 19 minute.. What was on your mind when doing these songs?
When we rehearse a new song we never know how much is going to last. We have all the riffs and try to combine them in the best way. So, the songs in the album came like this. The only thing we had on our minds was to listen them afterwards and feel proud of ourselves! 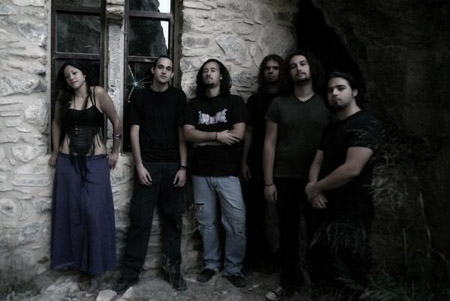 Is there any absurd event you’ve been through as a band? For example, the electricity went off during your concert or your tour bus crashed somewhere?
Good question but I think we are a little lucky so far and haven’t faced something so weird that is worth mentioned. I only remember during a concert I was sick and one step before vomiting to the crowd. Disgusting!!

I have nothing to ask anymore, is there something you want to say to Turkish doom metal listeners or is there something you want to add?
I communicate quite often with Turkish people and I’m impressed by their interest on our music. So, the only I can say more is that I hope we’ll be able to give a concert there. It would be a pleasure for us and sure a great opportunity to visit your country.