Greetings and welcome to Extreminal webzine.Please present PLAAG with a few words to our readers?
Somber: Ugh! Plaag is a musical project that was born out of misanthropic emotions I couldn’t get rid of in paintings. I decided it was time to take it to the next level and actually start putting words and music to the thoughts I was having on mankind and our western social standards. I mean I watch the fucking news and all it does is pissing me off and making me feel ashamed to even belong to the species of humanity. I sensed I was taken over by a lot of darkness and hate and decided it was time to put the mask on and let my alter ego do the talking for a change.
It became clear that it was no longer possible for me to function in society on a normal level with both myself and Somber constantly ranting against each other in my head so I decided to separate the two and Somber got his own face and playground: Plaag.
Recently I teamed up with fellow misanthropist Negativ. He resides in Norway, nicely secluded from most of the human activity and has contributed to the latest Plaag attack ‘Under Black ‘n Roll Banner/Christmas Hate’ which is due to be released around 20/12 on the 4th annual Misantrof ANTIRecords Holy Fucking Anti christmas compilation. Now this co-op turned out to be so satisfying artistically that I decided to recruit him as a permanent member. I still write and record all the music and Negativ contributes in lyrics and vocal parts. Some of the songs on the new album will be sung entirely by him, others by me and some by the both of us. Good stuff on the way I can tell ya. 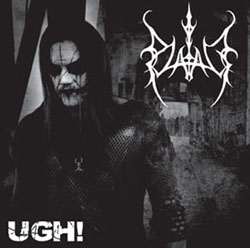 Your debut album is called "Ugh!".Where did you record it and what is the meaning of the title?
I just love that word man. It also explains the in your face – take it or leave it attitude of the album, nothing more to it actually. I recorded the entire thing here in my home in Hellgium, no fancy shit was required.

Who is the grim and evil figure on the cover artwork and what was the idea behind this picture?
That is Somber/me. I wanted to capture the industrialization and wasteland feel with it. Because that is to me really what this wonderful planet is coming to. A nuclear and broken wasteland where once nature florished in all it’s beauty and perfection. Brought to her knees and forced to self-destruct in order to recover her natural beauty. And as far as I’m concerned that self-destruction can’t come anytime soon enough. Plaag will be there on the side watching, ranting it’s comments sarcastically like Statler and Waldorf haha.

You describe your style as black’n’roll.Why did you decide to play exactly this type of music?
No that was not so much a decision but more of a natural process I think. I couldn’t make anything else. Hell I ain’t no talented musician at all you know. I just like to make music I like to hear myself, and I don’t like complicated music at all haha. I want rock ‘n roll to do what it says. Rocking and rolling, hard, mean, nasty and grim but catchy as fuck. Soundtracks to barfights, drinking binges and bike rides you know. The good stuff. 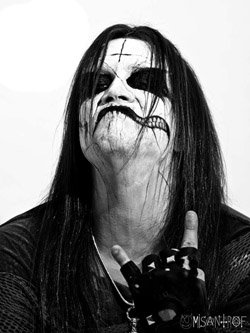 What inspires you to write your music and lyrics ? What are your lyrics about ?
Most of the lyrics handle about the before mentioned misanthropy, the irony of our existence is of limitless inspiration to me.

Are you happy by your work with MisantrofANTIRecords ? How did you get in contact with Daniel who is the owner of the label ?
Very happy indeed. Misantrof ANTIRecords provides art with no strings attached and no loss of control about anything for the artist himself. I mean, the Misantrof artists keep full control over everything and get a splendid platform to launch their art from. The whole idea behind it is brilliant and renewing.
I released a physical release of ‘UGH!’ myself and I sold all those copies in 6 months because Misantrof provided me a good and decent network. So I get noticed and appreciated for the art I make and I can sell everything I put my money in and even make a little profit to buy better recording gear to give you better sounding nasty black ‘n roll songs. Art for Art. In my book that is just perfect and that is what Misantrof ANTIRecords stands for as far as I’m concerned.
I got in touch with Daniel through music. Someone who works with Daniel noticed the song ‘Black Metal Rising’ (a cover I made from CCR’s ‘Bad Moon Rising’) on myspace. We started talking and Daniel asked if I was up to it to make a contribution song for the Holy Fucking Anti christmas Vol.2 compilation which I happily did of course and so ‘Christmas Time (The Birth Of A Retarded Child)’ was born. Out of all this grew the idea to actually record an entire album and release it via Misantrof ANTIRecords as a free download. And so I did.

When should we expect a second PLAAG album?
Medio 2012 if all goes according to plan. Working on it as we speak.

Are you fans of any other bands that are on the same label as you are?
I absolutely adore the sound of Beyond The Morning Light, Runar and Andy are both very talented musicians. Also Profane Prayer from Greece are a very awesome band, Avstand is supreme in it’s black metal and the new Memoria release came out wonderful too, some good and harsh blackened death metal for you there, and of course VRANGSINN is a wonderfully strange fruit in the box with meanings and emotions not so obvious for an untrained listener but the more satisfying it is when you actually ‘get’ him, so hell yeah I like a lot of them, if not all of them. 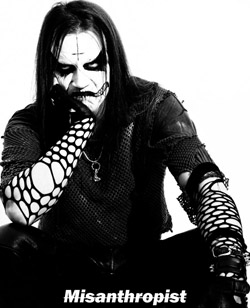 You are from Belgium and finally after more than 500 days you have a government in charge.What is your opinion about the new politicians who have the power now ?
I don’t do politics mate. I couldn’t care less. The less I am involved in this society the better. I try to live a secluded life, the people I am certain of are with me. All the rest better leave me alone or they will end up a mocked subject in a Plaag song anyway.

We are in the end of 2011. Which one is the best and which one is the worst metal album of 2011?
Best: Taake’s Noregs Vaapen, what musical perfection that is!
Worst: Nope, not getting into this. I am not the one to break down artistic endeavours of fellow musicians.

Your last words for our readers?
Thank you for the interest in Plaag and for reading this whole thing through. Keep on rocking hard, thrashing mad and remember to shout ‘Ugh!’ once and a while! And remember, free download of the entire UGH! album and artwork still available at plaag.misantrof.net!