Hello! At the beginning hackneyed question- what’s new in Pandemonium?
Q. Well, thanks, everything’s fine. We’ve just finished the preparations are approved releasing our album and we’re expecting with anxiety the reaction to it. It’s gonna be an interesting trip into the unknown.

It`s a time of releasing your new album "Misanthrophy". How would you rate this material through the prism of the previous releases?
P. Misanthropy is a full and absolutely complete material. It was a coragious and Crucial step in our history. At the same time we were faithful to our tradition and our own styles. I’m totally convinced That large number of Those Who’ll listen to our new album will share my opinion. On this album the included Practically Everything That ought to be included. There’s no time or space for emptiness or accidental stuff. But there’s the Might of sound, space and atmosphere. 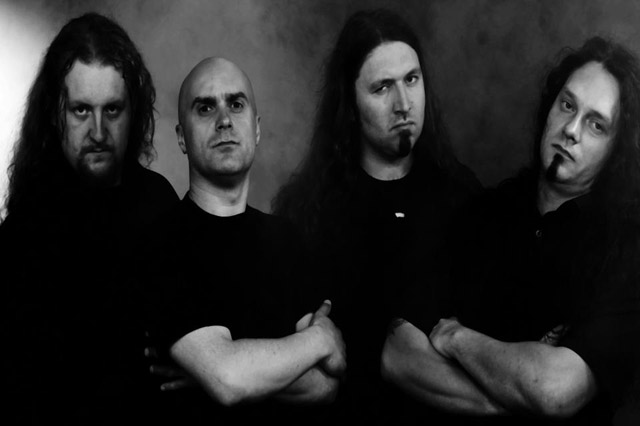 What about the collaboration with Khorzon (Arkona, Mussorgski) and Andronika Skoula from Chaostar (also known from working with Septic Flesh and Rotting Christ)?
P. Khorzon Brought to you by Gregory Fijałkowski me for which i want to thank him here. The guy has eyes wide open and huge Intuition. He told me about a few things and from things That he almost rolled really fast on Their Own. Androniki Skoula came to us with Arthur Urbanek / ART thanks!! / And the great Gregory Demographics. All in all, the see now how huge was the support received from the people around us with Creating this album.

In connection with the release of latest album, you`ll play the tour, what do you expect from these concerts, and how do you rate the current situation with regard to events of such music in our country?
Q. As the first act of, let’s call it the tour, Promoting Misanthropy, we’ll visit a few cities of course. That’s a start. We brainstorm all the time as to the Following concerts. We have to synchronize it and plan, correlating it with other eveents. What are we expecting? Always the same. Reaching the largest target group. Concerts situation or Situations, Conditions are what they are. Everybody knows what it’s like. No need to fool anybody. But there are times When it’s really good. In many respects. That’s comforting. 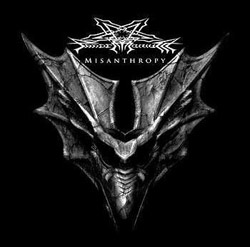 How often do you meet with the situations that the conditions of live shows are poor and it isn`t a nice adventure to you?
Q. Sometimes strange things happen. I’m trying to understand. Well, that’s life and that’s the job. Generally it’s fun. Sometimes too much.

Pagan Records released the material. Why do you think that this is the best place for you? If you were to compare the work with Tomasz Krajewski, and Mystic, for example, could you distinguish the most important differences?
Q. As the course of live shows, bands start Cooperation with one recording studio and later they change club colors. Cooperation with The Mystic was going great. I did not complain. We had a great tour with Behemoth, played at Mystic Festival with Celtic Frost, Slayer, Behemoth ….. What more can you want. With Pagan we begin our adventure. It’s got to be good.

A good job in promoting your team does Greg from the Godz ov War. How did you begin a cooperation with him and how it affected the team?
P. Gregory Demographics and his Hour Productions War Ov The Unquestionable are Fathers of our success. Gregory naughty with us led the way to the happy ending and it materializing the immaterial. That’s really something. From a point Actually he acted alone, supported of course by friendly people. Now Pagan promotes and edits our material. Two heads are better than one. I look optimistically at what is happening now is Pandemonium.

Your early influences are Hellhammer, Celtic Frost and Samael, and for those 20 years you still rather go path trodden by those bands. Do you identify with inspiration also in the more modern variants of heavy music?
Q. We only follow the right path. Our own path for a long time. It’s well known but it’s not yet totally discovered. It is all based on the experience and experiments from the past. It’s only natural. The guys have a huge share in the process of Creating – we’re on the same wavelength – at least as far as music goes. Back then tha bands I Mentioned before had really strong impact on me – I do not deny it. Today, When I create I absolutely draw ideas from every source. 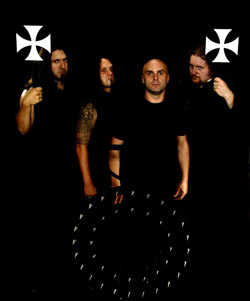 Release of your legendary demo in CD format Devilri took up his time under the name of Apocalypse Records. I remember that some of the teams participating in the project "Unholy Bible of Polish Death Metal" had some objections to it. Are you satisfied from this release?
Q. I do not like Creating unnecesary atmosphere. It does not serve any goal. I prefer Remembering Those Days as great time. We were trying to Promote music and material as the could. That is I think some extent all that is the cause of where Pandemonium is right now.

Do you remember the concert in Chelm in one of the high school back in the 90s? If so, can you tell what do you remember?
Q. I’ve played quite a lot of concerts with Pandemonium. I’d like to remember all of them, Especially That a lot of good things back then with Panda’s, at the beginning of our way. Unfortunately, some details fade in the course of life. There’s no reason for us not to meet in your city once again.

What do you learned from the activities within the band by those over 20 years?
Q. I Learnt to see the surrounding world from a different angle. I Became sure of my Convictions and built up my oposition towards the shit all over me. I Learnt to Tell the Difference Between rubbish and things of real value. Remaining and completing the project I’m in Helped with it a lot.

Do you think Pandemonium is closer to the scene black or death metal, and why?
P. Pandemonium Pandemonium is. I Know That one ‘has to’ stick an Identifying label to a band for the marketing / promotion purposes. However, I think That, as I’ve already Mentioned, We have a dry and style Recognizable That it’s not really Possible to mistake us for any other bands – at least in our country.

From what I noticed characteristic of Pandemonium is a strong emphasis on dark, sublime atmosphere. Do yourself the best by listening to bands that are good in building up the atmosphere? What do you think about a phenomenon such species as post-metal, sludge?
P. For me the music I’m by myself or Responsible share the responsibility was and is something very important. That’s why I emphasize some things. Everybody has the right to play whatever and however he likes. I Do not Meddle with other people’s affairs. I do not Glorify Negate or to show off. I Respect all work and workshop ’cause I know the price.

With the title "Misanthrophy", we can deduce, that has a rather negative connotation when it comes to the message? What are the feelings in its listeners should call the contents "Misanthropy"?
P. It Should evoke Those That it ecokes. It’s got to be received and read Individually, different for different people. The fact That there’s plenty of interesting things, let’s see how minds will grasp and undestand theme. Perhaps they’ll hear something subliminal? Perhaps they’ll hear something That others can not hear. Maybe they’ll Draw Their Own Conclusions. 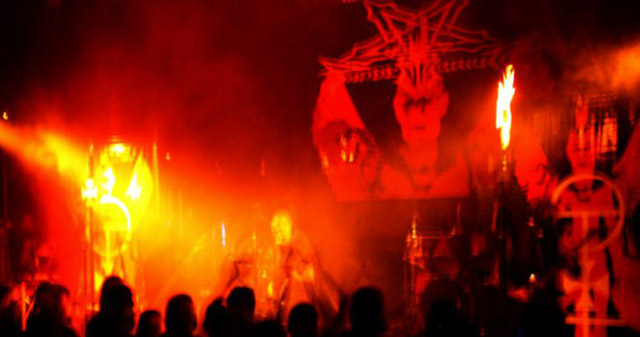 The album title suggests that this time we do not have text dealt with lyrics inspired by ancient mythology? From where we can find the reason of being the Sumerian civilization of your interest?
Q. Let’s give the Sumers and us a rest. At one point many of These Things Were shed light on and were Rediscovered. Interest? From where? From everywhere. Everybody has Interests. History, psychology, politics. I was always interested in different things as tose so called "all others". That’s my karma 

Looking through interviews with you, I came across a statement about the texts that were written "with the proper contempt for the shit that goes the world and due respect for the important matters." The question is as follows – what specific events you think are the shit that deserves only the stigma, and what they are, in turn, according to you is this "important matters"?
P. Shit has always been, is and will be shit. And it always floats. The important things are dry as being independent, having one’s own point of view, the way to see the world in a wider perspective than seen from the perspective of a pig through. Those deserving and Those Who TEINT are already live with one. The’ve already been given one. They rot in the hell on earth. In short. 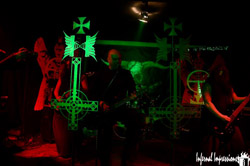 Is there any concrete purpose for the Pandemonium? Is it simply based on the activity of issuing cd`s and playing gigs without much pressure or you may have a different vision for the band?
P. The aim was and still is the will to self-Realize. It’s been Achieved and is still being Achieved in 100%. It’s the so called higher need. Creating music, its magic, energy and power. An additional aspect in the material world is the striving after any income from it. But it’s tilting at windmills and Impossible to Achieve in this country. So, only the first part of the question remains. Let it be true for the rest of our lives.

Can teams start-ups in modern times have easier? What is your opinion on this?
Q. It’s more Difficult for Them.  Well yeah, they have easier access to the equipment and the Internet. That I think however, that ‘there is a dry multitude of repeaded and multiplied creations That I just do not buy it. Once in a while a good and Valuable Appears creation but you know how it is – original and interesting things are scarce in the world. I regret it That’s the way it is.

Your opinion about the Internet, its possibilities and forms of promotion based on this medium?
Q. It’s a perfect tool, ideal – Especially as far as promotion of the bands is Concerned. Without moving your ass from behind the desk you can go around the world. You visit whorehouses, pray, communicate, to everything via this medium. It’s a threat and a blessing at the same time. That’s just the way it is. 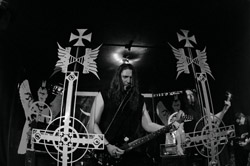 Concert with what the team is the pinnacle of your dreams?
Q. With Bathory …. But it’s a pipedream.

Apparently you are an avid angler. What do you think the best part of fishing? Because I do not think just about to catch some fish … Where do you fish most often? Float, spinning or live bait?
Q. I am sure. I track pikes and other predatory fish – actively, with spinning. Generally I take photos and let Them go. Sometimes I cut off Their Heads.

In addition the bands you also deals with graphics. Is this the source of your living, or rather another hobby? What prompted you to try the forces in this area?
Q. And the graphics profesionally. But artistically I do it for Pandemonium. For the so called average person I do not dry things as I can to let’s say for Panda’s. Why can not a man have a few passions 🙂