Mike,you have been kicking drums and screaming for sick death metal over 30 years.How are you feeling about music and your musical rage after all years?
Mike Browning: It is hard to believe that I am still even able to do it after all these years, but things are going quite well lately. 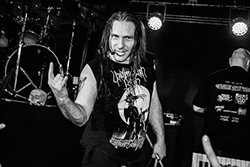 What plans do you have for Nocturnus AD nowadays?Do we fans have a chance to listen a new ultra sci-fi occultist death metal full-lenght soon?
Yes we are working on our 6th new song and once we have about 9, we will record a demo and will be ready to record an album after that, so hopefully we will have a demo and a new album out in 2017!

Would you tell us the story behind the re-invention of Nocturnus as Nocturnus AD from After Death project?Do you have any chance to take full rights of Nocturnus name?
Basically when I saw that Ghost was having the same name problem and all they had to do was add a BC to their name and it made it completely legal for them to use without any
legal problems, so I decided to add an AD to Nocturnus and it actually makes sense because the AD is really After Death anyway. I am going to keep it this way because it still isn’t Nocturnus with all new people, so adding the AD works in many ways.

Nocturnus AD plays in shows and active about gigs,what gigs are you scheduled this summer?Meanwhile,you visited Finland for a fest, how was that show?
We only have one festival scheduled in Miami in March right now, but I have been mainly concentrating on getting these new songs written so we can put out a really good debut album. The Finland Fest was great, in fact all the festivals we have played have been really awesome! I have been talking to a couple promoters about a few things this summer, so we will see what happens.

How did you form Nocturnus?You were the main man who activated the band,what aims you got back in past as a musician for Nocturnus?
I just got tired of being in other peoples bands because they weren’t really bands, they were one person controlling people under him and that is not the kind of band that I want to play in, I really like when everyone contributes their own parts, it makes the songs more unique.

You are a pioneer musician for death metal genre from United States and one of your musical acts which influenced death metal in 80’s is Incubus?Can you tell us the story about Incubus years?
Incubus was Sterling Scarboroughs band, I just played drums in it for about 6 months, long enough to record a 3 song demo, but we never played any live shows. Sterling committed suicide several years later. 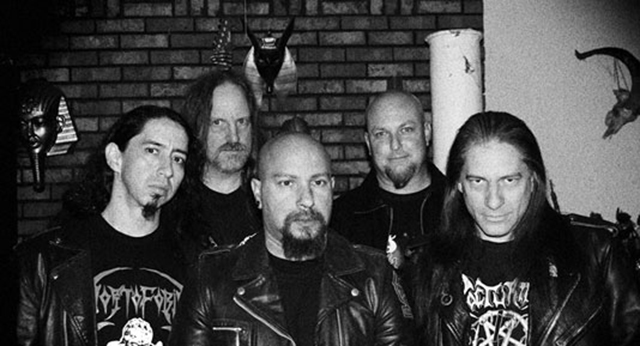 When I was a kid,first I saw you keep doing both drums and vocals on Vhs,I thought ‘’woww,it is very harsh work doing both technical high speed death metal drumming and beastly vocals’’,how did you improve that skill?Is it hard to do both works?
I just don’t think about it! When I think about it, then it becomes hard, but when I just let it flow it just works. But I do have to memorize the words first before I can really do it without thinking too much.

You are the original drummer of Morbid Angel,you and Trey formed the band together,would you please tell the story of the formative years for fans and our readers?You started this Florida Death Metal wave from the very first days,how things were started and progressed as a scene and bands?
I think most people should know this story by now because I have been asked it for 30 years, but yes I formed the band with Trey in high school under the band name ICE, then it became DeathWatch, then Heretic and then finally Trey settled on Morbid Angel and I was in the band until 1986 right after we recorded what should have been the first Morbid Angel album Abominations of Desolation.

Nocturnus made two masterpieces in 90’s,The Key and Threshold, which one is more better we can not still decide all over years.So here is a hard question,what is your favourite? Would you tell us the stories and anectodes of both albums for our readers?
My favorite has always been The Key, as far as Thresholds I didn’t have much input on that record, I just mainly played drums and wrote a couple lyric ideas wheras on The Key I played drums and sang the main vocals and wrote most of the lyrics and ideas behind them.

You backed to scene with After Death in 2002 from your intermittence ,what were you doing in that period?How did you start After Death?
I started After Death as Nocturnus back in 1999 actually and was told by a lawyer and Lou Panzer that I would be sued if I continued to use the name Nocturnus, so I came up with After Death at that point and that turned into Nocturnus AD of today.

How did you involve in Acheron after your Nocturnus days end in ‘90’s?Can you tell us that your period with Acheron?
Again these are questions that have been asked and answered a million times, but I joined Acheron in 1992 after my split from Nocturnus and I ended up recording a full album, an EP and a 7” in a period of about 2 years.

Mike,you are an occultist and a dedicated freemason,and you always utilized the themes of occultism in your musical projects since the very begining.What is your understanding about occultism and freemasonary?
Occultism is just something that I have always had an interest in and it contains a really wide spectrum of things to learn and study, Freemasonry being a part of it. I always say that if you want to find the true meaning of something, then become it.

How did you contract with Earache back in days?How did it work?Are you happy with re-issue LP’s of Nocturnus lately?
It was actually Trey who told Digby from Earache to check us out because Trey was hanging around Mike Davis our guitar player at that time. It turned out quite well for the first album, but we made big changes to the band before the second album and those changes caused the second album to sell only ⅓ of what the first album did and eventually led to the breakup of the band. Earache contacted me about the reissue of Thresholds on vinyl for the first time, so I helped them with that and right after they totally started ignoring me again, so they basically used me to sell it again. They are still selling Nocturnus shirts and hoodies and not paying the band anything in royalties.

Is Nocturnus AD looking for a label or do you have a contract for any possible future release now?
We have a couple labels we are talking to already, but I really want to wait until we put out a proper demo, to see what offers we get from other labels as well.

Thanks a lot for your cool answers,Mike.Any last words to tell to fans and readers?
Just Thanks for the support for all these years and 2017 will see the release of new Nocturnus AD music for sure, so be on the lookout for it!