Borning in Israel but inhabiting in Holland now, the most famous and remarkable Black Metal Society in the middle east (even though they call themselves Mesopotamian Black Metal.) , the band Melechesh. We had a short conversation with them. 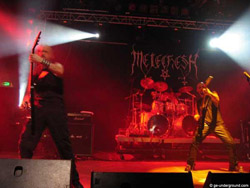 Hello, Melechesh has a remarkable number of fans in Turkey, and your fans want to know, what Melechesh is busy with recently?
Ashmedi: We did a lot of concerts around the world and now we are putting the finishing touches for the new album before entering a studio to record.

You had started your carrier 16 years ago in Jarusalem which is accepted as holy for three big religions and at first local community and religious regions didn’t give you a good reaction, could you please tell us about those days?
The beginnings of Melechesh back in 1993 were very interesting and fascinating. Yes we were the first black metal band from jierusalem and the first metal band in the country who had non israeli members. When we started it was all quiet by 1995 a lot happened due to misleading newspaper article , we got in some trouble but it was a long time ago it was sorted out later. In east Jerusalem we were frowned upon and became cast outs for a while.

In the first years of your career, you had been recording raw black metal songs, what were the factors leading you to this?
I started Melechesh because I wanted to create raw music influenced by Bathory the return album however with middle eastern touches. From day one though we used middle eastern drum patterns but the musical emphasis was raw, we then decided to invent a middle eastern style of black metal and we worked on it for a while first song were release 1995-96.

As far as I understood, there had been a turning point in the band,after your first spectacular demo is called ”The Siege of Lachish” had been published in 3 different labels, how did you establish these
contacts?
Exactly well the song “Siege of Lachish” represented what we intended to do. The band name was spreading quickly in the underground around the world and labels started contacting us. A German label wanted to release a 7” ep with that song and two American labels released our first album which we intentionally kept on the heavier more raw side. The person who contacted us was Akhenaten from Judas Iscariot ( before his band was made). The debut album “As Jerusalem Burns …Al’Intisar “ was later released by 3 other labels so was our debut 7”. These two releases were the start of our careers in a more serious way.

You gave a few concerts for a documentary, who was the father of this idea, of course this was a contribution for introducing the band , can we say that this was a turning point?
We have been in several documenteries back in the “holy land” and later for other film makers. Now there is a documentary about myself a film maker is working on it in Holland . 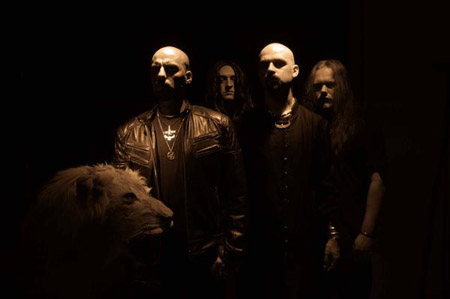 Was the local crisis the base reason why the band members moved abroad, or did you have bad memories in Israel, why did you move abroad?
We left for many reasons. Musical career, needed to leave Jerusalem because I was tired of being stuck in a middle of a fight which was not mine. Also to pursue a university education. SO the reasons were many.

How did Proscriptor Mcgovern (ABSU’s drummer), got involved with the band?
He is a friend of mine for many years, I told him we seek drummers in Holland he said he would like to play drum for us. We are still collaborating in different ways. For example I wrote the lyrics for three songs on the newest Absu.

“Djinn” brought a remarkable attention, how did the band members met in Holland, could you please tell us about the times you had deals with Osmose for this band?
Well Djinn’s music was being developed over several years by 99 we met in Holland because the bass player and I lived there, Moloch lived in North France and Proscriptor flew from USA, we recorded our album and shopped around for a label we got several offers we accepted Osmose’s as it was fair. We are still to this day with good relations with them but we moved forward.

And I can say that the album “Sphynx” made a real explosion, why did you make the records of this album in Sweden?
Sphynx opened a lot of doors for us, it was a major breakthrough for the band. We met in Holland rehearsed for a month daily, this was after having made several pre-production demos. We then flew to Sweden to work with Andy LaRoque of Kind Diamond. He is a good friend and did a great job, and also he did a guest solo and riff.

It is said that with the success of this album you are in top ten around the world, what do you think of what made this album this successful?
The album is extreme metal, it is a new way of defining black metal which frankly was becoming mundane due to the repetitive clone bands and the lack of credibility or conviction in many albums. We invented our own Black thrash type of hybrid music that has references to Middle eastern music both drums and guitars but also the lyrics come from a profound and meaningful source. The rest was up to the fans and media.

How did it effect the band when Xul switched to the drums?
Musically not much has changed however when Xul joined we were able to do more shows. Drum wise I write the drum patterns so the music did not change. Naturally each drummer has an own touch when it comes to drum roles and the likes. Now because Xul lives in Holland we can practice all the time . Nonetheless, Proscriptor and I are still very good friends, as I said before. I was on stage with ABSU a month ago I think.

If we also touch on the album ‘Emissaries’, what had been your expectations, what were the results?
We wanted to do our best and create a perfect album ,, we had pressure to top “Sphynx”. Fortunately “Emissaries” was very well received, many of the world’s metal media voted it in the top 10 or top 5 of the year’s charts . We got major exposure in USA and also Europe. Tour offers and festival offers were being constantly given to us . “Emissaries” broke a lot of boundaries and the album is still circulating. Our fan base has increased dramatically so I am very happy with it and grateful as well that it is as such.

With the originality of your band you had moved forward and eventually similar bands reproduced, do you listen to any of these groups, and do you support this evolution?
I did hear some bands reproducing or being mildly influenced by us it is an honor to be honest, its very flattering. I do listen to some of the bands if I get a chance. Even some well established metal bands did some reference to our music on a part here or there it is very flattering and great. 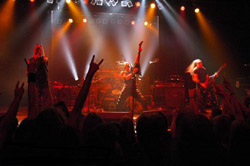 Except for being Mespotamian, are there any other important reasons for you to narrate more mystic and Mesopotamian themes instead of classic black metal themes?
Our themes are based on our origins and most mysticism have routs traced to the middle east, Anatolia, Persia etc… we also have occult themes from various parts of the middle east. The area is the cradle of civilizations . I find the themes fascinating and they reveal a lot about the human nature and condition even our origin, and by that I mean our pre Earth origin .

Why do you have been less eventful since 2006?
I don’t understand as since 2006 till now we have toured Europe and north America and played countless festivals. We also recently signed a record deal with Nuclear Blast. SO things has been busier than ever.

I guess, one of your band members, Ashmedi, has a lot of contacts in Turkey, I heard that he took a stage with Harun Kolçak, who was the owner of the idea of getting involved in such evolutions?
Well yes since July 2009 I spent over 12 weeks in Istanbul. I am actually now in Ataturk Airport waiting for my plane back to Amsterdam. My girlfriend is Turkish so I come here as often as I can. As for jamming with Harun , we were in touch via mail for several years because he is interested in black metal and the occult, when I came to Istanbul he invited me to join him on stage for an improvised jam session. We are good friends he is a very interesting and intelligent fellow and he is very much into metal music. 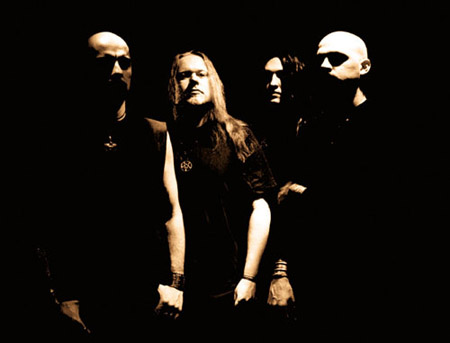 I have a few questions up to date, sure that we both live in middle east countries, (though youre not here you might be following up), could you comment for why these issues are so complicated in these countries?
I don’t think the issue is as complicated as some politicians and sanitized media portray it. I always say don’t tell the story from half way, star From the roots of the problem. 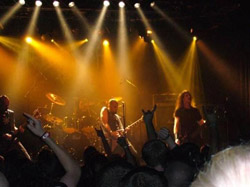 You know, the impingement between Palestine and Israel, chaos in Iraq, Iran’s nuclear rumours, and Turkey’s internal disorder, what do you think about these?
Human ego lack of flexibility , had the Swedes been there they would compromise to reach a healthy solution. Us eastern people are quite stubborn and many have huge Egos, over emphasis o ethinicities ,we are all people and all the same if you really think about it..

I’ve changed the subjects rapidly but the coming ones are my last questions,Are you one of those who thinks that metal market is developing with the leading of the internet or do you think it goes back and it will slowly vanish?
The internet is a strong dynamic it does not work one way only it does both record industry is dying that’s fact, but music is not we have a lot of new fans due to internet that download us or fans that cannnot find or afford our albums they then come to gigs and buy merchandise. On the other hand bands and labels earn less on record sales.

In recent years some groups in Israel made a name in overseas, do you follow any of these bands?
Not really. I know a few bands there though

Finally, is there any bands you like in Turkey?
Yes Pentagram, I know Cenk and Murat and they are both excellent people as well. I also like Mogullar, Zeki Muren , Baris Manco, Undertakers they are all very good. I saw Kurban open for Faith
No more in Istanbul when I was there good band.I know Ibrahim Tatlises and Gockun Sabah , I REALLY don’t like them both