Hi! What`s up? What`s new in Chile?
Hello people! Here we are with all the enthusiasm to answer this interview. Well actually, there isn’t much going on right now here in Chile. We still have a stupid president. The "Teleton" is coming though, the charity event for children with disabilities. 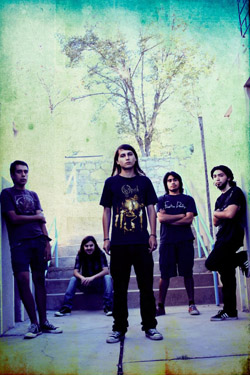 To someone who hasn’t heard your music how would you describe it?
Well, if we have to define a "genre" maybe we would say what we are a mixture between "Technical Progressive Melodic Death Metal" and some core influences.

You just released a new "Worthlessness" album. How long did you compose songs for this stuff? How have the general reactions to the CD been so far?
The composing took at least a year, and that means the composition of the different songs, recording the bass lines and voices. The reactions for the cd were pretty good. As always there were good and bad reactions, but there were mostly good ones from the people and we really appreciate that.

Could you tell what is the place on the frontcover? Is it your town? Why did you decide to this picture?
It’s a picture of our lovely city, Quillota. At first time we had two choices: an art album of our friend Sebastian Cataldo, and the picture that will be edited by another friend Diego Aranda. But how we are a democratic band, we chose the picture by a 3 over 2 votes. Both were amazing works. At the end we decided to use this picture just because is our home place and where the five of us were born and live. We really love our city.

What’re your personal favourite tracks from the album? And why?
The seventh song, "Redímere" is our favorite, because is short, so fucking fast and brutal. Just because of that actually lol.
And also I (Marcelo) really love the song "King Vs. President" because it talks about one of the best fights that I have ever read: the fight between The President Netero and the King Meruem, both are characters of my favorite manga of all times, Hunter x Hunter!

I know that you played a cover of Swedish legends At The Gates. Why did you choose this team? Is the Swedish death metal particularly close to you?
We choose this song and this team to see the reaction of the people, and at every show, people really enjoyed the cover. Well, we don’t know if it is "close" to us, but we are really big fans of Opeth, at least four of us are fans of that beautiful band.

Do you think you send any type of message to your fans through your music? What about the lyrics message? Is that important to you?
Well, the lyrics have their importance. The songs "Chaos", "Suffering", "Vindicatio", "Redimere" and "Worthlessness" talk about the same, and it is about the hate for the humankind, a questioning for their acts, how they can do thousands of things without thinking about the others, the selfishness, the vengeance that oneself can have in their hands, the redemption that is possible only with death, that kind of bullshit, all those are absolutely personal thoughts. The song "Just another love song" talks about a guy in love and obsessed with his girlfriend, that at the end he kills her and later kill himself. The song "King vs. President" talks about a fight in the manga of Hunter x Hunter, that also is something really personal haha, our intention is not one of "sending a message" at all, we prefer the idea that the people enjoy our music completely. That’s more important.

How do you look back on the shows you did so far?
Well, thus far, taking account our last show at the city "La Calera", our presentations have been pretty good. The public has received us in a good way. There are always people, except for one show in Valparaiso where we played last for giving other bands the preference of going first because of the organizer of the show. In that one there was practically no one, but things like that always happen. Nevertheless, we’ve been doing pretty well.

How is the process of creating songs? Do you write in the practice room or at home? How often do you play a rehearshals?
The process of creating a song is pretty simple. Our guitarist, Daniel, does all the work at his house. With the company of a good joint, his guitar and the computer, he let the ideas flow for themselves. We practice once a week, every Saturday afternoon and when we have a presentation, we try to practice twice a week. 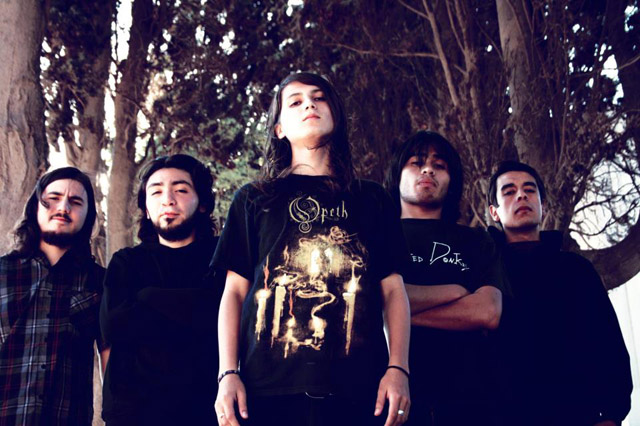 You mix many different genres together – does this reflect your personal taste? Could you tell something more about your personal tastes?
Well, I’ll try to tell you which genre each one of us identifies with, I mean our favorites.
Daniel: Death Metal and all of its influences, but he is more guided for Decapitated.
Esteban: also Death Metal along with Power Metal. Krisiun is one of his favorite bands.
Carlos: he loves Progressive Metal. Opeth would be one of his favorite bands.
Rodrigo: Black Metal is his favorite and stronger genre.
Marcelo: I’m a big fan of experimental and progressive music. Opeth, The Faceless, The Dillinger Escape and many more. Now I’m listening to Twelve Foot Ninja, they are spectacular.
And that’s about our tastes and influences, so you may have an idea. Also, Melodic Death Metal is the genre we play and our strongest influence.

You shared your new stuff online. Do you view downloading/file-sharing as mainly positive?
Yes, obviously. It is by far the best way to spread your music. Plus, it’s free! There are so many platforms for this that it would be a mistake to think of it as an impediment, specially for independent bands that don’t have an income to create physical copies or even merchandise for the people.

Can you tell some words about Chilean life and mentality? What do you do on a daily basis? School, job, something other?
Of course, in fact the mind of a Chilean is very special. In general, everyone is very friendly, kind and warm. Chilean people are very generous and very good for sharing things.
Our lives consist in getting up, got to college, every once in a while getting together to talk, to share a joint, to laugh, to walk, etc. And I (Marcelo) being with my son and my girlfriend, being with our families, occasionally go to parties, to a barbecue and that’s all. Now, at the end of this year, the guys have been super busy with all the final exams. Sadly, that’s the life of a student.

Besides Incepthropy, are you currently in other bands or have you ever been earlier?
Right now we are all focused in Incepthropy. Daniel and Carlos were on a local band called "Altera" a couple of years ago. Esteban and also Daniel were in another band called "Misanthropy", but in these days, we are 100% with Incepthropy. 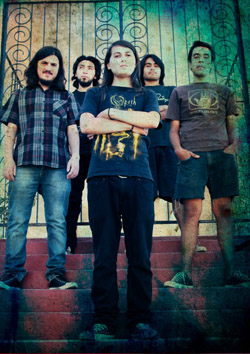 What do you think, how is the metal scene different in South America compared to Europe? What do you think, where it would be easier for you to play, I mean conditions, the stage, the approach of people?
Nowadays, in South America, the genre is very strong and even more in places like Brazil, Peru, Argentina and Colombia among others. In Chile this genre has been arising little by little. Chile, in the old days, had a very strong setting (talking about this kind of music), but it began losing its essence, because people started setting aside independent bands. In our opinion, it would be like a dream to be able to perform in Europe, that’s the place we want to go. We hope to be part of one of those giants and beautiful outdoor festivals, like "Wacken Open Air" for example. One of our goals is to get there and we think it would be the best for us. At least once before we die.

I see you`re a football fan What are your favourite teams and how could you evaluate the popularity of this sport in your country?
Marcelo: I’m a fan to death of Colo-Colo. Esteban and Daniel like "Universidad de Chile". Finally, Carlos is an Arsenal fan. And yes, football soccer is the most popular and important sport in this country.

When was the last times you laughed and what was it about?
It was last weekend. On a Friday we went to drink some wine with friends. We had a pretty good time, we laughed about a ton of stuff, I wouldn’t know where to start haha. Plus I can’t remember much of what happened and neither can the rest of the members haha.

What next do you have planned for the band?
Our intention, at least for 2013, is to have a stronger view of ourselves and the band. Thus far, there are three models for our next CD that we want to release in the beginning of the second half of the next year, hopefully as a physical version. Also, along with the CD, we want to release shirts, to start organizing events for us. We hope to make "reborn" this scheme of people wanting to go to concerts again, buying the merchandise, being part of our music. Besides we’d like to give importance to underground bands, because here in Chile there are way too many good bands.
We really hope to succeed in every project we have and never stop creating and innovating in different aspects, since that is very important in every band.

Anything you’d like to add to conclude this interview?
Well, thank you very much for taking the time to create this interview, for your support, for helping us with our band. We really appreciate it. Also we want to thank all those people that help us to rise and grow up as a band. Thanks to the public that enjoy going to our concerts and events, (and also to those who doesn’t). Thank you to all of you who have downloaded our music and to our families that support us from the back whenever we have to perform. I, Marcelo, would like to thank Camila, my girlfriend and mother of my son, for always being with me in our shows, for being there by my side always. She’s like another member of the band haha. I love you so much.
And that would be it, once again, thank you all so much for giving us this space to show everyone who we are. We really appreciate it!