First of all thank you for accepting the interview. For those who do not follow underground market that are uninformed about your group, would you please briefly tell us about your group, how did this adventure start?
Hello to all brutal maniacs in Turkey. Well, ENTHRALLMENT is extreme band, born before 11 years. In first 2-3 years we play standart US death metal and we have a chance to record and release one cassette Ep (“The Scarlet Difference” / 1998 / Dark Mist Productions) and one MCD (“Burning Fields” / 2001 / Butchery Music). After this period we change our conception like sound, ideas, arrangements, lyrics, etc. The first experiment is our first CD (“Smashed Brain Collections” / 2006 / Grindethic Records / Grotesque Productions / Sevared Records). The work on mix of very speed tracks and also very slow too. But we ask more and now the result is ready – “Immerse Into Bloody Bliss” (2008 / Metal Age Productions). 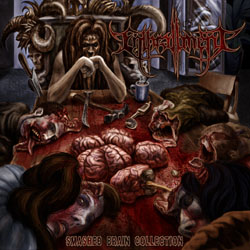 Smashed Brain Collection has been a favourite album specially by underground death metal fans, how were the reactions you got in general?
The first reactions we see in musical press – very possitive reviews. But the great for us is that have 3 songs that everyone fan know on our shows – “Awaiting The Death”, “Total Zombie Domination” and “Mutant”.

Actually you also have a quite cheap, yet impressive video clip. How did the idea come out? How did the shooting go? Was there a director or was it shot by totally an amateur team? Can you tell us about it all.
Look , we never wish to work with PC effects and preffer the real ideas and vision. The work is not total proffy, but not and undergrond. The great is that the all scenes in our videos and really – blood, worms, graves, …!!!! Maybe for you will be news that we have and second video to “Smashed Brain Collection” album – on track “Total Zombie Domination”. 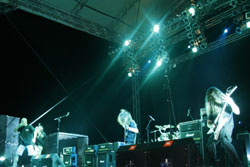 Generally you give local concerts, in which country and at which festival out of Bulgaria did you take stage? As far as I know, you have also gone on small tours. You would have experienced interesting events. Would you share them with us?
For band brom Balkans is normal to play in general in our region, but we have and three tours to this moment. The great for us of course is the European tour with Rotting Christ, Malevolent Creation and Rotten Sound. Maybe you know that the polish agency Massive Music work ONLY with big bands on their tours and we have a surprise when we got mail from their owner to put us on this tour. Of course, we have great moments with all fuckers on this tour, but we see total different methood of work , different of this that you see on everyone local show. And from this moment and to this moment be sure that ENTHRALLMENT work and play on stage like everyone supper band ! We hope very soon to see this in your country.

What, in general, do your lyrics talk about? For those who have no idea and those who have just started, what kind of a musical structure does Enthrallement have and what is the attitude?
We play brutal music and normally is the lyrics to be brutal too. We pressent real maniacal storys for murders and other creazy peoples 🙂 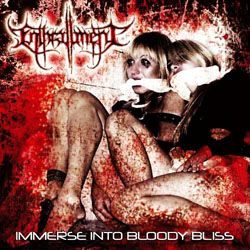 The cover of Immerse Into Bloody Bliss looks quite interesting. Who is the designer?
Plam

Do you play cover songs in concerts and festivals? If yes, which groups do you prefer? Have you ever thought of covering a song out of Death Metal and Extreme Metal?
Yes, we play covers of bands like Suffocation, Deicide, Dead Infection, Prostitute Disfigurement, Dying Fetus and others. On this moment we work on our version of maybe best bulgarian rock’n’roll song in original by band AXAT.

Who are the basic groups that influence the Enthrallement group members? We especially wonder about the first bands that you used to listen when you begin your musical career.
Everyone ENTHRALLMENT member listen different styles and bands. Plam preffer gore bands, AC/DC and one bulgarian project NLO. Chris like classic american death metal and old school black metal. Vasil listen classics like Slayer, the first albums of Sepultura, Death, Gurguts, Deicide. Ivo is to total extreme forms mixed brutal death, gore and grind core. 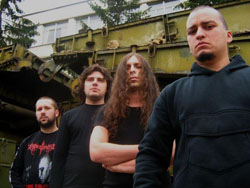 How were the reactions in general to “Immerse Into Bloody Bliss” released in 2008?
This is the album with style “Enthrallment” ! Total different from standart conceptual albums that from first to last tracks are like one song. On this album have everything for one extreme fan – from slow old school death metal to total speed tracks, have old school sound (with more bass) and also modern ideas, … we have and song who everyone know in everyone country – CANE THE MESSIAH WITH THE CROOK. This is great moment for us when the all fans on our shows sing with us.

In what stage is the new album recordings? Is the release date determined?
We work on new songs and 3 of them are finally ready for recording. No, we don’t have fixed date for recording, but this will be in next 2010. We also will film and video clip to one of songs.

Would you prefer American or European death metal groups ?
European and special the bands from The Netherland and Poland.

Are there definite differences between the two, what do you think?
The great % of american bands play for sport, not for music. For this we don’t like them. In Europe have traditions and it’s normal to have part of our life in our music. But you see american and european films – this is same. 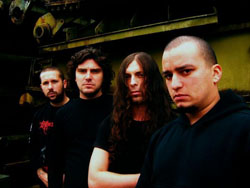 Do you believe that the increase in the download sites and the widespread of internet globally has a negative effect on the sales of CDs, DVDs etc, and on the other hand do the sites like myspace help the amateur groups?
Problems with the download have the labels, not the bands. But special our things are that the general problem is from labels and the CD or DVD selling cost. It’s unnormal CD for 1,50 USD to sell for 10 USD + shipping cost. OK, they give a % to bands, but they wish to have more that 100% profit. About My Space – this is total help and for bands to present them to fans, and for fans to have more sure communication with the bands that they like (or to be sure that they will see that their messages are read by bands).

Do you like the new generation deathcore groups in general, if they interest you, are there any groups that you specially follow?
NO, NO, NO. This is total shit “style”.

Is there any group that you would like to go on a tour and take stage together?
In our history we have a chance to play with bands like NAPALM DEATH, OBITUARY, DESTRUCTION, ANCIENT, VITAL REMAINS, SINISTER and some others…. No , we don’t have ideas what the band will be interesting for us…. Or maybe SLAYER? Yes, this is interesting!

Does the Enthrallement group follow the daily news ? Is there anything that you would like to say about the recent economic crisis, epidemic illnesses ?
The economic crisis is worldwide problem and everyone have problem from this – you don’t need news to know about this. From peoples we know about all others news, but be sure that we don’t have a free time to watch TV or listen radio. 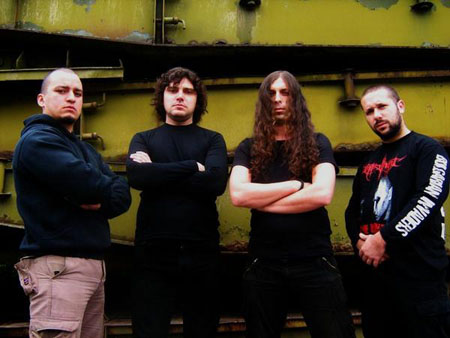 These were our questions, is there anything you would like to add or say to the current and future Turkish listeners?
In first we wish to thanks of all Turkish brothers, who support us on this years and hope in future to have some and some new friends from your country. ENTHRALLMENT work for shows for next 2010 and hope to visit and your country. This will be fantastic. If everyone have personal questions to us – send your messages in our My Space profile ( www.myspace.com/enthrallment ) and we will answer you with sure. See you soon !!!