Diktat was formed in 1997,after 3 years you spreaded your first demo album, until now you passed 8 years, What is the reason of this waiting and what did you do in this season?
Alex:The reason of this long waiting is due for most of it to a neverending turnover of drummers between 2005 and 2008, just after we released « II ». Some of these years were also dark ones for some of us, personnally speaking. But we spent all this time practicing and composing new titles and we have now a drummer we can trust !

The first demo album published only as tape and what was the reactions about it?
We spreaded this first DIKTAT demo tape 2000 all around the world and got really good reactions at that time, we opened shows for great bands in Paris like Malevolent Creation, Immolation or Master and more. It was a live studio recording, You can always download it for free.

“II” is accessed to us to making review and it might be accessed many website and magazines, what is the reactions?
Yes, indeed, we try to spread this second demo as efficiently as the first one, We usually get good feedback concerning « II », make up your own mind about it ! I know we play some kind of twisted music so don’t give up the listening !

In my review I sad record has not quality it’s waste a point for me what is the oppurtunities of you under the record take times till “II”, I guess next album doesn’t come after 8 years ,do you have news?
Yes you are right ! The sound of this second demo is not as good as we expected it ! but when we recorded « II » we had the opportunity of making it for free . In one way you can tell that’s a good thing, but in reality it took months because we were using the studio when nobody was working there, and so the result has no real coherence. I think now that there are things that must be payed if you want a good result ! Don’t worry you won’t have to wait another 8 years before next recording ! 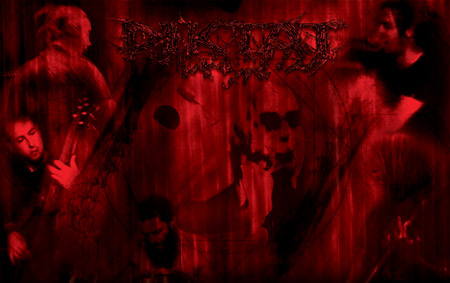 I heart it you obtain offers from some record companies, with any company do you have plan to making deal?
Some small record companies actually asked for us from time to time but they never offered more than what we could do by ourselves so we are still unsigned… please make a sign !

What is the relations of with your fans?
DIKTAT has now a faithfull bunch of fans and friends , we always get new people each time we play, and that is what we like because the audience is the first importance for a band whoever it is ! no fans or listeners, no band ! Our pleasure will be to meet metal brothers and fans from all countries !

Time and time again European bands take arounds country by country they makes tours they don’t wait big festivals they make concerts in bars do you have plan like this? If it is yes with which bands you make tour or which bands you want make tour?
Yes we are of this kind of bands who plays at all cost ! We play almost everywhere because we are not so famous yet, and we are always happy to make a show ! But we have played in very good places in Paris and France ! Metal is not so popular these years in our country and it’s true it is becoming more and more difficult to find good venues and we do play in bars from time to time .
DIKTAT has never done a real tour but we had very great metal fests with killer bands actually ! like Incantation, Yattering , Dying Fœtus ! To answer your question we are ready to play with any bands !

Until know I have been heart a lot of black metal bands from France, I think black metal more common in France, what do you think death metal, death-grind scene, or generally metal scene in France?
I think you have a false idea of the French metal scene because every kind of style is proudly represented these years and you can find very good bands of each one , all you need is to be curious ! just like us when we are seeking new bands from all over the world !

From diktat can we hear new things in the near future?
Yes ! we shall have a new DIKTAT recording in 2010 with our new drummer so be aware ! new tracks are already ready, we’ll let you know !

That’s all for my questions, do you have one more thing for our readers?
Thanx a lot for this interview and for your support ! I hope that your readers will enjoy our music ! We are alway glad to meet new people so do not hesitate to get in touch with us,
DIKTAT is on myspace and facebook . So long !, you Turkish metal brothers !!
Maybe we’ll come and see you one day ! Keep it metal forever !!!