Musical roots of band members depended on the begining years of 1990’s and all you had played in known bands.What is your purpose to start Degenerhate? What was triggered you to start this Project?
I formed the band in 2002 , after some years away from the extreme music scene, cause I was bored by the mediocrity of the musical offer. I formed my first band in 1989, and i lived the rise of grindcore/death metal, and i was nauseated to watch some silly kids acting like rockstars! After these reflections, I felt the need to return to the dear and old extreme sounds. That’s why I started DEGENERHATE. We released a 4 track promo cd in 2003, with session musicians. After that, i contacted two old friends Max (vocals) and Fabio ( bass), and we recorded the mini cd “The end has just begun”, with Cristiano Rotatori on drums, it was in 2006.
After a period of pause, and several lineup changes, finally we recorded our first full length album “Chronicles of the apocalypse” in 2013. The album is mastered by Scott Hull, and it was released by SLIPTRICK RECORDS in October 2015. 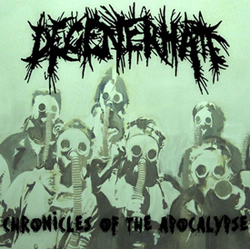 ''Chronicles of the Apocalypse'' is your first official album released in 2013,first you released it on your own and later you deal with Sweden’s Slipstrick records,how did you contract with them? I think that you are more extreme band than Slipstrick’s bands,what are your thoughts about your label and contract?
After recorded “Chronicles Of The Apocalypse”, we were looking for a label interested to release the album. We had received several offers from labels from around the world , but in the end, we decided to ink a deal with Sliptrick Records. Carlo Muselli from the label, is a cool guy and a friend, and,plus,we are the only grindcore band of their rooster , and it’s nice!

Can you name your style,’’a classic grindcore’’? Or you define your musical style as special names,for instance some bands use names as their styles like Nuclear Metal,War Metal,Evilcore,Goat Metal ?
I never liked names in the music…ofcourse, we play grindcore, but not a classic grindcore I think, because our grind is contaminated by sludge, melodies and other stuff. So, if you want a name, I can tell you we play “contaminated grind”.

Gianluca has been running a radio show called Total Virulance since 1990’s,what do you play in your Show?For over 25 years,how is a feeling about running a show? I am sure that you cause many people loved many different bands and metal music in your radio show.What are the main differences between 90’s,and 2000’s and 2010’s?
First of all, the radio show is over since 1999, to be right. It was an awesome experience, because TOTAL VIRULENCE, was one of the first extreme music radio show in Italy,probably the first, and we met a lot of cool bands during the years. We interviewed acts like Carcass, Napalm Death, Immolation, Obituary, Gene Hoglan from Death and many others. Good memories and little nostalgia… Now is total different, because internet, there are a thousands of webradios and for the bands is easier. I think this the main difference between the 90’s and today.

All we must earn money to stay alive,except music,what are you guys doing in business? How is life going on?
Two members of DEGENERHATE, Fabio(bass) and Angelo(guitar) are session players and music teachers, I am an interior designer, Renato(vocals) is a school teacher and Stuart(drums) is a freelance graphic designer. Life is going better because the grind! 😉 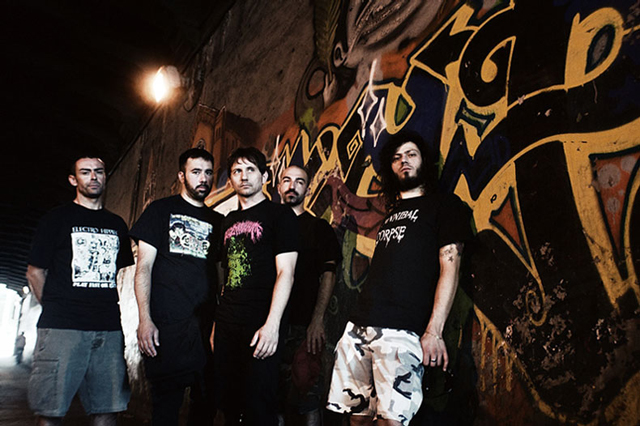 Do you like giving gigs? Do you play live in gigs regularly? Any plans to give gigs abroad?
Sure, we love playing live! We will make a Russian tour like headliner this summer, plus we will play some gigs here in Italy and a few in Europe. Stay connect with our Facebook page for all the fresh news.

Just right we talk about giving gigs,are you appealed with play live or recording new songs?
Actually we are recording the three songs for the split 7” with the mythical AGATHOCLES. By the way, we are looking for a label to release it…anyone interested?

There is a trend comes up like re-releases of all albums of old and ex-bands in special edition packages in record label business and scene, do you see this as only commercial or a good thing for new generation kids of old school trend?
I think both things. For the labels is a good opportunity to rise up money, for the new generation kids is an opportunity to know the pioneers of the genre. 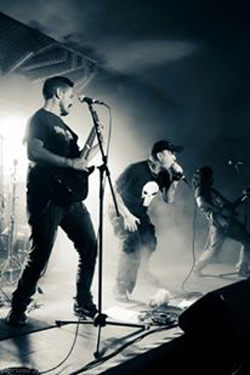 Let’s talk about the lyrical concepts of Degenerhate,can you tell us the lyrical themes, what are the things you opposed? What is your ideology and what are the messages you want to give?
We always had sociopolitical and ecological lyrics, like in the old grindcore tradition. But over the years, we also wrote lyrics more personal and intimating. I write all the lyrics in the band, and for us they are important as music for us. That’s why we always insert a booklet with lyrics in all our releases. Our message to the people is: OPEN YOUR EYES AND DON’T LET THE SYSTEM GET YOU DOWN!

I like to ask questions about current issues to bands,what do you think about islamic terror and Isıs? How is it reacted in Italy? Do you think that it is only religious massacres or is it related to politics and games of some western or capitalist world?
We are against any form of terrorism and religious violence !
In Italy, we are worried, as the rest of the world for this critical situation.
The only violence which the world needs , is the sonic violence.
We suppose that behind all this shit, there are dirty power games.
GRINDCORE NOT WAR!!!

From past to present,it is the one of my favourite questions in interviews, what is your first and last album you bought? Can you share us the most painful one of your stolen cd’s? Or you stole some?
The last album I bought is “Surgical Steel” from Carcass, an awesome release! The first, I suppose, was “Kill’em All” by Metallica.
By the way, never stole a cd or been stolen!

Our questions are done brother. Please say your last words to our readers to finish this interview.
Thanx a lot for this interview and for the opportunity man, really appreciated! To all your readers, please friends, like and share our Facebook page. And follow us on Twitter. And don’t forget to buy “CHRONICLES OF THE APOCALYPSE” ! GRIND ON!