Hello, "Extance" is out now for some time. How are the reactions from the fans and the media about your album and how much are you satisfied with it now after some time has past?
Achilleas: We worked very very hard on "Extance" and really put all of our hearts and minds on it. I must admit people appreciated it more than we could expect. It sells well, it is much appreciated both by the underground BM and the experimental/prog scene and of course press and media have really honoured us with amazing reviews and promotion.

Almost 3 years has past between "Cendres Et Sang" and "Extance". What is the biggest difference between these two releases in your opinion?
We kept the same ideals and way of thinking so there is not a specific difference between those two albums. There is a huge upgrade in all levels – aesthetics, technic, expression, production, lyrics, guest musicians and composition. So the biggest difference is that this album is more "mature" and of course more authentic. 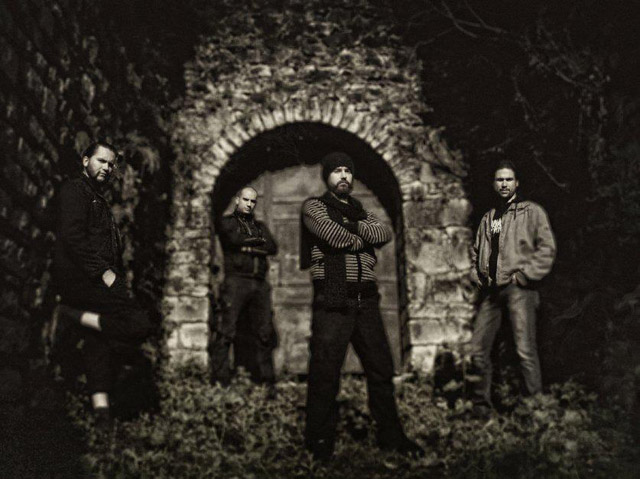 Could you tell us a bit more about the recording of the album and also about the lyrics?
We recorded everything in my studio and in Infinite Loop Music Studio in Ioannina. The recordings started immediately after "Er' release in 2013. We worked very hard and tried to be as open minded as we could so the tracks kept on transforming and filling with more and more ideas through the recordings and the mixing procedures. Of course the Mastering of the album was done by Tom Kvasvol which is a constant fellow worker in our visions. Lyrically Astrous kept on writing his abstract anthropocentric concepts as he always does. Many powerful visions to discover on "Extance" but they just need time and hearings to digest.

This time, you also recorded a video for a song from this album. What is the story of it that you/or the producer wanted to put into it?
Yeap, Sotiris Benekos, a video producer from Ioannina, Greece, wanted to help as create this one and we thought that this album deserved a music video.
The story behind "Der Mude Tod" video is quite simple. There's a black-dressed-demon looking guy which represents death and on the other side a simple naked guy which represents life and humanity. Death character is performing 3 rites and each time we see a new vision full of symbolisms and emotions. At the final rite we see the end. Everything is burned down and man is suffering and struggling to endure the inevitable.

Do you fell that a video will introduce you to a wider audience since Youtube is a media that can promote artists?
Yes of course! Unfortunately these days more and more people, especially young ones, are really impressed with multimedia than simply listening an album carefully and creating their own images. Αlso a lot of people are listening music only through youtube and internet nowadays so it's easier to find out about you if you have a good video.
Nevertheless we wanted to create a video which has an artistic value and not just a band playing their instruments so I think it was a good thing to do anyway.

This song has also a certain Arcturus touch in it. I can compare this one even the "Er" song from your last Split 7".
Well sure, we all love Arcturus but I don't feel we have many Arcturus elements in our music. We have a much more "black" and aggressive perspective. "Er" I believe was a more groovy and progressive experimentation and I don't find many similarities with them either. Anyway, Arcturus is a huge band that has affected us with one way or another so I won't try to convince you the opposite.

You seem also to record a lot of Splits with other bands. What is your opinion about Split CD's/7", etc.?
We love doing split releases and we will continue doing them. It's a great way to collaborate with other artists and labels plus they're great collectable items and an underground old school underground tradition. We love splits but sometimes they really suck and they're just a way to make some money more for the bands and labels. We choose on doing them with the same quality as we treat our albums.

Every album from you has some guest musicians on it. How does it come to the collaboration with them? Does it come during the song writing progress or later?
Well sometimes there is a plan and other times it just happens. No rules. For example we composed "Funeral Blues" with a purpose to have a rough jazzy female vocalist on it. On the other hand after we recorded "The Land of no Water" we felt that this track had a Sigh touch on it so we tried to communicate with Mirai and convince him to do it. Same thing happens with instrument guests. 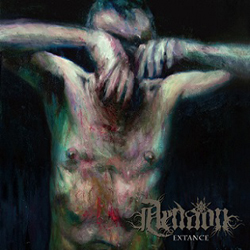 Before your album came out, you started to play live more often. So far you played with Primordial and Watain (in Greece). What are your experience from those shows and will you play now more often live and also outside of Greece as well?
It's not that we don't wanna play often but we have financial difficulties and also job and family issues that don't allow us always to do what we want to do. The good thing is that since 2013 we have two new members (Anax and Nycriz) that have really helped us to be more active. The future for live activity both in Greece and abroad is still unknown for us. Every gig is a good experience, playing with big bands is good because you have many people that will listen to you and find out about you but on the other hand there is always more time pressure, bad sound, set up limitations etc that don't allow you to do the performance you want to.

How do you look upon the progress that Aenaon made from your first release "Phenomenoum" until "Extance"?
Since the beginning we wanted to be a progressive band with the meaning of the word itself. I believe we always try to make progress and try new paths and horizons without limiting ourselves and we have done good so far. We started as a small "clone" of aggressive and intelligent bands like Emperor, Zyklon, Thorns etc and ended up having quite authentic approach to black metal. We managed our first goals but yet the future is always more interesting.

Are you happy with your label Code 666?
Yes we are. We feel that they love and respect our music and most of the time treat our releases the way they should. We wouldn't wanna end up in a huge label that doesn't give a fuck about us. They try their best promoting us and distributing our music and they seem honest in our conversations. That's more than enough at the moment.

Any last words?
Thanks for the support, much appreciated. We'll keep on doing our best with honesty and passion. Hails!