Well, first of all, congratulations because I believe it’s a real honor for you to be part of Thrashfest 2010. So how did you get to this huge tour? 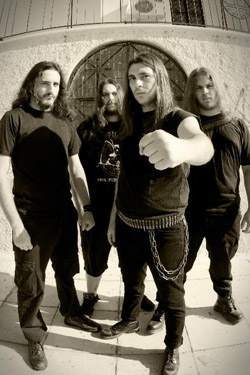 Nick Melissourgos (vocals, guitar): When we left Nuclear Blast and we joined NoiseArt Records they directly offered us this amazing tour. That’s how it happened. We are more than honored to play with bands that have been a great influence to us and that created what we call thrash metal music today. Exodus, Kreator and Death Angel have been the ones that created thrash metal music in the way we see it today. I tell you what. When I was 15 years old I was headbanging in my room to these bands – and now I have a chance to play with them. So the least that I can say is that I’m fucking honored to play with them.

Besides the fact that these bands are all your major influences, do you now have personal or even friendly connections to the guys?
Of course. We are on tour, we meet every day and one way or another we have a chance to talk every day. Apart from saying “hello”, “good morning”, “good night” and stuff like that, we have this chance. I’m just sitting with these guys and “interviewing” them in a personal way. Kind of like that. For me, it’s like a dream coming true, that’s how it feels. For all of us, actually. This tour gave us a chance to become really close friends with Death Angel. And now that we have a chance tour tour with them in eastern Europe it’s going to be more than amazing. We are friends and what is most welcomed or most appreciated is to tour with guys who are already friends of yours. So this tour is going to be like “Thrash Over Eastern Europe”, kind of like that. The guys are great, we spend so many hours with them, we get in touch with each other. We just spent one week together and we already knew each other so well that I believe that the March tour is going to be fucking great.

As for the Greek scene, the band called Lucky Funeral is getting more and more known internationally, making one European tour after another. Do you know them?
Yeah, I know them. Some old friends of mine are playing in this band. Despite the fact that I don’t listen to that kind of music (it’s something different that I listen to), I totally respect what they are following and the steps that they are doing. I love that these guys are out on tours, even by themselves, and I really like that they are pushing the music out in Europe their own way. No matter if I don’t like the music, it’s an honor for me because they are old friends of mine. A couple of them at least. And if you see them again, just say hello from me, all right? 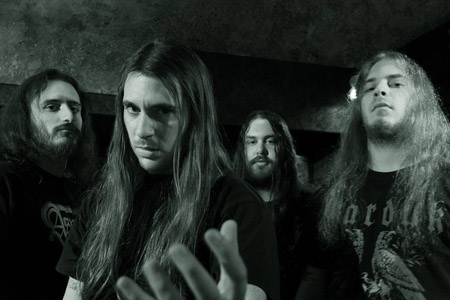 All right. And what other Greek bands are coming up currently?
There’s a brutal death metal band named Inveracity that is doing some concerts in Europe. There is another old school death metal band named Dead Congregation, they are fucking amazing, I love them. So I believe that within the next years, you will see more bands, no matter what kind of music they play, classic heavy stuff, thrash, death metal or black metal, come gradually on the surface of metal music in Europe. Just be patient and you will see that these bands are going to come over on the surface and you will learn from them, you will hear their names. There’s so many bands in Greece that play good music, they just need the chance to spread their music in Europe. 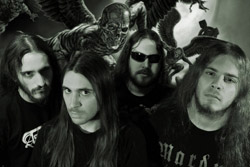 You’ve been around for many years but your career has actually started in 2007 after your first full length album, “Eternal Domination”, right?
Yeah. You know what? You can go out in the market just like that. First you have to try. You have to spend money on what you are doing. You have to do it self-financed in order to go out in Europe and world wide in order to promote your music.

You have experience with different record labels. Your second album, “Sanctify the Darkness” came out on Nuclear Blast…
Our second record was released by Nuclear Blast and this was given by winning the “Rock the Nation” award when we had a chance to sign a deal with Nuclear Blast. Our cooperation with Nuclear Blast so far was incredibly amazing. And we’re friends with these guys, they’re coming over to our concerts, we meet each other at festivals. There are no bad feelings about the fact that we’ve left Nuclear Blast now. There was no fight or anything like that, the guys are still friends of ours, we’re talking by e-mail and personally at concerts. It’s just a decision that we moved from a label to another one. There’s no need for a fight, a misunderstanding or anything like that. We belong to a management and this management is taking the best decisions for the band. And they told us that we had this offer from NoiseArt. We saw what was going on, we talked to the guys, made a deal and that’s it. They did a great promotion with the new album. Now we got the chance for a big deal, they didn’t have the chance to do it before and I believe it’s going to be more than a great cooperation with these guys because they’re really professional in what they’re doing. The guys from Nuclear Blast were also as professional as these guys are, so I believe it’s going to work out really well for all of us. 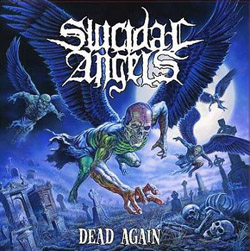 Looks like you have all the reasons of the world to be optimistic about the band’s future concerning the “Dead Again” album, the Thrashfest 2010 tour and your 2011 tour with Death Angel…
I don’t want to be optimistic but realistic. I’m just watching and seeing things as they are. I’m trying not to have any feelings about anything but to be focused on what is going on. We’re really excited being on the road with friends, like I told you before, because this gives us a chance to play more and more and more gigs and make new friends. I don’t like the word “fans”. We’re friends with everybody. We don’t see it as the band and the fans but as the band and the friends of the band. All of them are our friends. I know most of them by names. Even if they are hundreds or thousands. I remember their faces, their names. They come over to each concert and find me and the other guys, of course, and we talk to each other, like: “Hey dude, how’s it going, how’s life?” and stuff like that. So I’m really excited about the upcoming tour because it will give us a chance to make new friends and also to meet old friends. That’s how it is.

Greece played an incredibly important role in the history of European culture. Do you think people in Greece still respect it today? Do they keep true to those traditions?
Greek culture, I mean the ancient Greeks’ culture, has been a great influence to Europe through the years. Greeks know their culture and they respect their culture somehow. But it’s not only the culture that you’ve had before that will keep you moving in the future. You just have to take examples of your ancestors and then to move on. So I think that in the world wide culture, Greece has been a great influence. That’s what I’m seeing around, what I was taught in school or anything like that. Unfortunately, Greece sucks nowadays. We have really serious problems with all the economic stuff and all this crisis. But I believe we’re going to make it through. 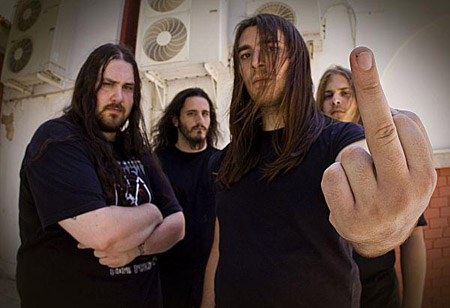 What about today’s Greek scene? I know how dedicated Greek fans are. So, are they still as supportive as they were before?
I can easily compare the Greek audience to the Hungarian audience or to all the Balkan and southern European audience because they’re fucking nuts. They’re insane. If they like a band they go totally insane. Stage diving, huge fucking mosh pits, people bleeding after the shows and stuff like that. Sometimes even we bleed after shows because all this stage diving. We become one with the crowd. I must admit that I have already stage dived a couple of times during a Greek concert. We were playing and I just put my guitar down, jumped in the audience and moshed with them. It’s just amazing.

Do they support the Greek scene as much as they support foreign bands?
I can not talk on behalf of all the Greek scene. Each of us has his own favorite bands either from abroad or from the local scene. But as for me, if I like a band that comes from Greece, I’m going to buy their shirt and their CDs, I’m going to bang my head and mosh at their shows if that’s what I really want. Whatever I feel actually. That’s it, that’s how it works. If you like a band, just go for that. Just support this band. It’s going to be good for you, for your own country and for the band itself.