Hi there. How is everything going in the Greek Brutal Death Metal circle and your life? Hope everything is well. What has changed in your country after the economical crisis?
Greetings man and first of all thank you for this interview!The Greek Brutal Death metal scene is quite strong though it has seen better days to be honest. The economical crisis has unfortunately affected our lives enough and I can’t imagine how things will turn…Fixed up situations to control our lives,this is our world…

Where has your “The Age of Recreation” album recorded? How did the recording process go?
“The Age of recreation” album was recorded in Thessaloniki in September of 2009 in Rundevilrun studios.The whole process was quite ok I would say although time was not our friend as I remember…But in the end everything went fine and I think we managed to create a strong production and general result! 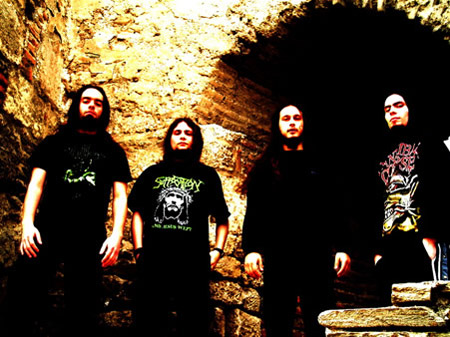 On which subjects do you like to focus on in writing lyrics?
When it comes to the lyrics we do not intend to write weird stuff or decline from the standard death metal tradition if you know what I mean.We usually write about humanity and its bad aspects like religion,wars and conflicts and such.To be honest I am influenced by some of my favorite bands like Hate Eternal or Morbid Angel and this helps me to find some ideas or thoughts but of course always expressing them my way. 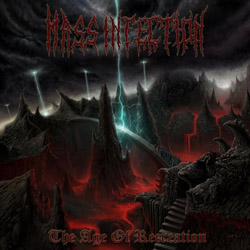 The cover of your “The Age of Recreation” album is quite dark and appealing. Who has drawn it?
The cover was completely designed and drawn by George “Grin” Prasinis.He is from Athens and we already knew about him and his works so it was easy for us to get in touch with him!The result was absolutely satisfying for us and we will cooperate with him again for sure!

Recently it is said that your new album will be released from Comatose Records. Is it only for once or will you go on with the company, what about it?
Yes,we came in agreement with Steve and Comatose Music,quite soon after we finished our two new songs!It is for one album only but who knows,we maybe work with him again!We want to truly thank Steve for this chance,we are honored to be a part of this wonderful label!New album to be expected in early 2012!

You are about to release your third album. What can you say about the status of MASS INFECTION at present, if you look back?
Well we are almost at 10 years of existence as a band and if I look back I can say that at the moment we are in a very good situation,our line up is the same for 4 years and we’ve been rehearsing and working a lot!We’ve been through some difficulties like almost all underground bands but we are still willing to make some brutal music!

You have quite a nice and brutal logo. Who has drawn it?
It is made by George Prasinis,too!Not so brutal and complicated but still a death metal logo! 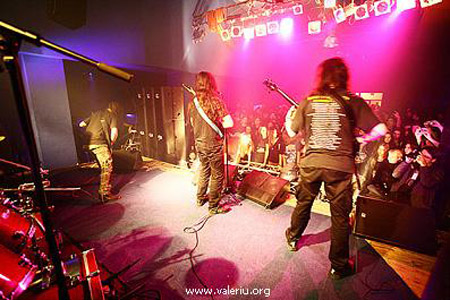 What do you think about the future of the Brutal Death Metal? “Core” like in Deathcore , Metalcore..etc is quite in demand in the scene lately. New generation headbangers are into such kind of music.
That’s an interesting question!As we observe the world death metal scene the two main styles now are the slamming/core and the extreme technical.Personally I do not enjoy slamming so much it is not my kind of music but of course I pay some respect to hard working bands of the genre!I think death metal music has still enough to give,there are plenty of killer bands out there and so the future looks promising!You can find some tremendous albums from all the death metal styles like old school or brutal or technical and this is the reason that this kind of music has survived through the years!

What do you think about the new music styles?
As I told you before those new slamming/core styles are not my kind of music but of course they gave our scene a new way of thinking!Time will show if these styles will last!This of course depends from the fans,too! 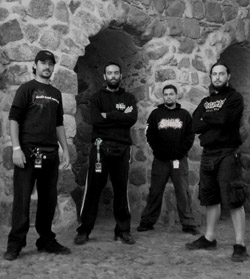 Who are your favorite bands? With favorite I mean, a band that you take as a model or that is your reason to set up your band. Who is/are your deity?
The bands we admire the most today are Origin,Unmerciful,Disavowed,Nile,Dying Fetus and some more,fantastic and unmatched skills and music they create! They are a good reason to create something of your own!But we worship some standard Death Metal monsters like Morbid Angel, Death, Vader, Suffocation, Deicide and
such for sure, these are the bands we’ve been listening from the beginning!

One of the things that interested me in your band is that unlike most brutal death metal bands, you use classic growl kind of vocals. You do not have Pig Squel and etc. vocals which we often started to see in Brutal Death Metal and Slam Death Metal. What do you think about the vocals like Pig Squeal, Frog and etc?
Indeed we use only classic growls and not pig/frog squeals.Well,I think every band uses whatever fits better to its music!We play some standard brutal death metal and so we use classic growls,if we played slam we would use pig squeals etc..It is all about what fits to your music better! Personally I truly enjoysome deep brutal voices like old Severe Torture or Disavowed!

A very large earthquake occurred in Japan recently and following it, many people have lost their lives with the tsunami. There occurs numerous earthquakes both in Turkey and Greece. What kind of studies are done in your country about it? 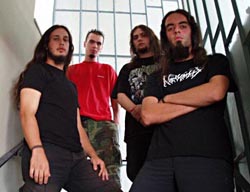 Yes,really horrible what happened to the Japanese people,this things ruined their lives for sure but we all hope they make it,they are anyway famous for being strong and determined!I don’t know about the studies for earthquakes here in Greece,it is an aspect i am not interested in maybe cause of its destructive force..Just hope we won’t have to deal with it…

As you know, after the earthquake the nuclear power plants have given alarm and due to the leakage of radiation many people were influenced and lost their lives. What do you think about the nuclear energy and power plants ?
Nuclear energy… A huge discovery but used for evil reasons!I think this says it all,maybe if used for good could be extremely useful but at the moment it causes only mass destruction!

Let’s get back to MASS INFECTION again. What did you have in mind as you were choosing the name of the band?
Ah you have to ask George about this one!I can’t give you a clear answer,I think that George and Nick that started the band back in 2003 just found this name amongst others and simply kept it without further thinking haha! 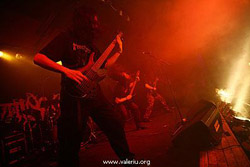 Soon you will take part in important gigs both in Turkey and Las Vegas-U.S.A, do you have special plans for a stage show? We look forward to seeing closely how wild you are .
We are so excited to appear in such countries and festivals for our first time!No we do not have any special plans for shows or to look wild and angry,we will simply let the music do the talking and we hope the fans will enjoy it!That’s all!

Do you have anything to say to Turkish headbangers before the concert?
Just a big thanks and hail to everyone that will come and support the whole event,we hope they enjoy our appearance and of course the other 3 great local bands that we will share the stage with!See you soon!