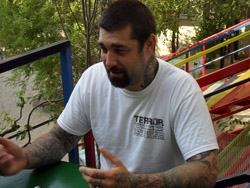 What is the occasion of your Summer gigs (festivals an club shows) here in Europe without any new release out?
Chris Beattie (bass): Just to play. We took a lot of time off this year so we wanted to get back here and to play.

Besides these shows, Jamey’s (Jasta, vocals) solo album is the most important Hatebreed related thing currently…
Most important thing for him maybe.

And when can we expect the next Hatebreed album to be released?
Probably early next year, somewhere around there.

According to Jamey, he’s going to keep the melodic vocals for his solo album so we can expect a fast, aggressive and short material from Hatebreed.
Yeah, you’ll get a Hatebreed album that’s not melodic, he can do it on his debut.

There were a few melodic vocal parts on the last Hatebreed album. What kind of fan reactions did you get to those?
It was kind of mixed. Some people liked it and some people wanted the old stuff, the hard stuff. But I thought it was good to try something a little bit different. It was what it was, it’s not like a direction we were going. I think it was a good experiment but now we’re going to go back pretty much to what we used to do. 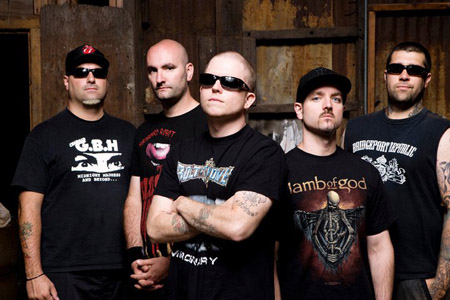 Do you have any expectations from the next album? I mean Hatebreed is already very well known band so do you think you’ll be able to increase your popularity? Do you consider your next album crucial from this point of view?
I don’t think anything is crucial anymore. We are who we are and if you don’t know us or don’t like us at this point then that’s too bad. We do what we do, you know what you’ll get when you come to our show.

Besides Hatebreed, Kingdom Of Sorrow is active now, Jamey has been running the Hatewear apparel and Stillborn Records etc. He’s a real hard working guy isn’t he.
That’s his thing.

And he used to be the host of MTV’s Headbangers’ Ball. How’s that show been going nowadays?
I don’t know. I think they show some videos occasionally but it’s not what it used to be. MTV in the US is mostly reality shows now and not really music.

Speaking of Stillborn Records, what do you think the future of the record labels is going to be like?
It’s just getting worse. People think that they’re entitled to everything and just download. We make our records and do what we do ’cause we love to do it. Then we come on tour and play. You can’t count on the record sales anymore. The real fans buy it but most people don’t. We’re a live band and people come to see us live.

How important is the Internet in your lives? Do you think it’s a useful tool to keep contact with the fans or to look for new bands?
To a certain point. People like it around there but then sometimes it turns into less good. People start to put all kind of crap on there and then the importance of the social networking sites just gets lost. There are so many people on there and everybody is posting stuff and the message is lost. For bands, I guess it’s cool to get their name out there. It’s a lot faster to be exposed now than it used to be. But it all only matters if you use it for the right reason. 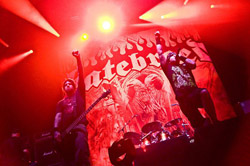 Back to the band: you have Wayne Lozinak on guitar again. He is one of the founding members of Hatebreed but then he quit in 1996 and got back in 2009.
Sean (Martin) left the band and we wanted Wayne to play. We didn’t want to get somebody else that wasn’t part of what we do and that we didn’t know personally very well. We know Wayne for such a long time.

A lot of people have played in Hatebreed but most of the former members didn’t spend that much time in the band. What do you think the reason for that is?
Most of them just didn’t really hang with the lifestyle, the touring and stuff. People don’t realize that until 6-7 years ago, Hatebreed didn’t make any money. We just toured a lot, we did about 300 shows in a year. Then you come home and you didn’t make any money so you have to work. It’s very hard for some people to deal with it. You come home and then your whole life is different. And a lot of people just didn’t deal with that. Some people weren’t good enough to be in the band and other people had personal problems but it’s mostly the lifestyle. I work for a construction company at home. Everybody does their own thing: Frank (Novinec, guitar) works, Matt (Byrne, drums) is going to school and Jamey does the things you’ve mentioned. And Wayne just sits at home and plays guitar, ha ha! But it’s cool. When you’re home and not on tour you get bored. You can’t just sit there and wait for the next tour to happen.

Do you have any musical projects like Jamey does?
I’ve put this band together called S.O.S. It’s me, a couple of guys from Terror, Matt Henderson – who used to be in Madball and Agnostic Front – and Sam from Trapped Under Ice. Our album just came out on Good Fight Records.

You’ve had a cover album called For The Lions. Do you think Hatebreed means the same for younger fans as Bad Brains, Agnostic Front or Sick Of It All (or any other band you grew up with and covered) meant for the older generations?
I think so. People definitely got into us when they were kids and they will remember the time they first got into the music scene. 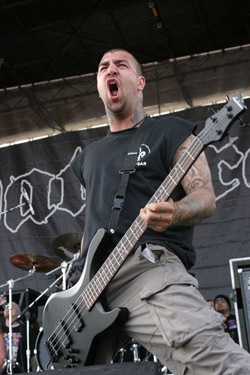 Hatebreed has both hardcore and metal following.
We grew up listening to all that stuff and we were influenced by it also. I think it’s just our style, it’s just how we translate the music. And we play with anyone, too. We’re not like those bands that only play to hardcore people. We like playing to everyone.

What does hardcore mean to you? How would you define it?
It’s hard nowadays, it has changed so much. When we started the band, hardcore was more like a scene. You have it over here in Europe a little bit more than in the US. Everybody was hanging out, going out to shows, making music, trading music… It was more a community, unlike in the US now which is kind of a shame. It’s just how you act, it’s a way of life, doing what you feel is right for you. In the US, you have big festivals but it’s all the same bands every day. When you come over to Europe, everyone plays, even bands you haven’t heard of in the US for a while. There’s all different types of genres, heavy metal, hardcore, rock n’roll and things like that, which is awesome. Every city and country has their own thing. So the festival scene over here is amazing. In the US, it really isn’t like that. You have Ozzfest, the Mayhem Tour and more traveling tours. There’s bands that popped up on there, it definitely helps if you have a metal following, but not every hardcore band. They have different ways of getting people on those festivals, they go by record sales and things of that nature, not the music.