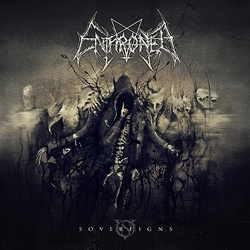 Your new release is distributed on our markets and can be listened on the listeners’ cd players so what can we expect from your latest album? And personally, can could you tell us something about the writing and about the recording process of "Sovereings" ?
Nornagest: I started to work on the lyrical concept of „Sovereigns“ about a year ago, I wanted to do things in a different way, a different approach. I explained my goals to the other members of Enthroned and they were tremendously interested and all wanted to go in that direction, the composition of the album in itself started a few months later due to our touring schedule and activities with our other bands. The writing and recording process went really fast, once we sat and discussed a few things the songs seemed to flow like a waterfall, I’m still impressed today of how fast it went. „Sovereigns“ is in general more direct but also more hypnotic and an emphase was put on the atmospheres using mainly lead guitars and samples we recorded ourselves from tribal chants from Bali for example, ritualistic chants from the Cult of the Benu and unusual instruments like a sistrum or authentic battle horns to name but a few. All in all, I think „Sovereigns“ is really as we pictured it, the album pleased the old fans like the new ones and I enjoy to perform each track live. 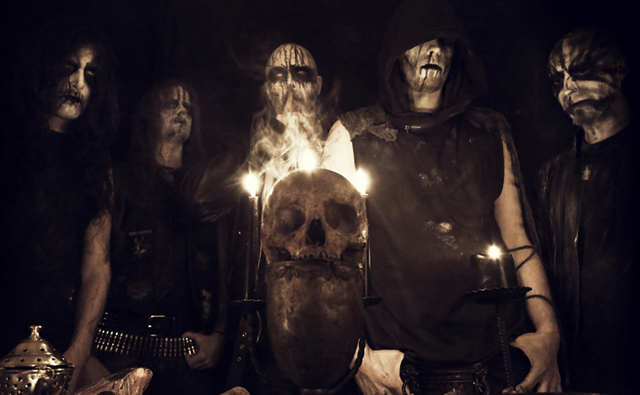 We know Enthroned is always using the "occult" topic in their lyrics. Can you tell us something about the lyrical concept of the last album?
The approach and „topic“ differs from one release to the other, for example our three last albums were a trilogy based on our personal evolution thru out our study of the occult, on a VERY personal level. With “Sovereigns” it is kind of complex to get especially for someone who is not into the Occult, Satanism, Goetia etc… Even then some might interpret it as fiction or simply misunderstand them in the core of their true essence, but it is absolutely not the case. We are dealing here with another perspective upon things, until now our lyrics were based upon us, how we see things, deal with them, learn from them and what we achieved through them. In this chapter we see all those things from “their” point of view, these views being interpreted regarding the experiences we had with some of those entities or someone of undoubted reliable source had with one or more of them. Eight of them are given the pen, if I can say it like this. The title doesn’t mean that we see them as our rulers or our Sovereigns, but as the monarchs in their own domain, field and attributes. “Sovereigns” could as well be interpreted as our sovereignty upon our own career, not upon other bands etc..; that would be rather arrogant and ridiculous, not that I consider myself lower than anyone else but after 21 years of existence we conquered many adversities, time and fate itself, so it can also be seen that way.

What are your expectations for your new album? How are the reactions of the audience and fans?
My personal expectations are already met: I wanted to compose an album which would reflects the concept I had in mind, and we did it. I’m not really aiming at selling more, playing bigger fests, larger tours, fame etc… These things are meaningless to me when it comes to the composition, end result or „expectations“. I would rather focus then on the message spread to the right people but yet again, the concept was done in a very selfish way.
As for the reactions, they have been absolutely stricking; we gained a lot of new fans, individuals that actually disliked the music of Enthroned before loved the album and actually wrote us to know more about the hidden face of the band which is far more rewarding to me than thousands of coins and notes.

“Sine Qua Non“ , “Baal al-Maut“ , “Nerxiarxin Mahathallah“…The song titles are quite interesting. Is there a certain story or topic behind these names ?
Always… as I said the concept is unique from the point of view that each songs deals with a certain entity and the lyrics is seen from they point of view. „Sine Qua Non“ (translated by „without which it could not be“ in Latin) is the point of view of the demon Ipos, „Nerxiarxin Mahathallah“ (translated by „Infernal Mother of Desception“ in Hebrew -Semitic), is the opinion of the female entity Machaloth and “Baal Al-Maut” (translated by “Lord of Death”in Semitic) is the sharing of Azraël. The best way to know more about the story is to read the lyrics and try to decipher their content or get your own interpretation maybe even if in this topic it might be kinda off at some point.

Your last two albums were released by Agonia Records. Are you satisfied by their work for Enthroned?
Absolutely, there are always some details ehre and there but honestly , as a band these days, can you really complain, when a collaboration with a label is distrubed by small details?? And even then, these details are solved by just phoning or talking with the label manager, so yeah, we are plenty satisfied of their work. We got often asked by fans or magazines why we ended up on Agonia, why on a small label etc… but to be honest, I prefer to be with a smaller label, that gives us what we ask/ want, respect our liberty of expression and doesn’t try to change our style/ image. We have 100% freedom on what we do and that’s really important to me.

Some Black Metal bands write their music and lyrics under the influence of drugs and they are shooting videos about it like Shining, Nachytmystium, Nattefrost etc. What do u think about drugs ?
I think every substances was created/ put at our disposal for a reason, if the right person with the right reason uses it I do not see where the problem is, it is to me exactly the same thing as alchool, sex, medicine, gambling, coffee etc… all can lead to an addiction and that’s the beautiful thing about drugs… A person who drinks his Glennfiddich now and then to relax is normal but if you become a slave to the drink and NEED it every single day, then you are just weak, same thing applies to drugs, it is your choice if you need it once for a good, productive reason or if it is just for the sake to take it and cant do anything without it, then you are just a fucking junkie scum. Alchoolics are to me far more repulsive than a guy who smokes pot to chill after work or take a line of amphetamine when he is too tired to appreciate a party or company with friends he has not seen in a while. But all in all, it is a good way to cleanse the world of the weakest scum around as well, to me at least, it has its healthy purpose as well; a tool but if abused and needed a cleansening tool.

Black Metal was a reaction of the Rock’n Roll and the Heavy Metal scene and is an ultimate underground scene from the very begining up to nowadays. But today many Black Metal bands use drugs and also use Rock’n Roll images / stereotypes and lyrics. They propagate drug addiction and Rock’n Roll lifestyle at all. What is your opinion and of course your reaction towards these terms?
It is all personal to the person/band that create such topics, to be honest it does not enter my field of interest when it comes to Enthroned. It has nothign to do with what Enthroned stands for or the purpose Enthroned was created for. My vision of Black metal in its core has nothing to do with these entertaining/ cool topics or ideology. The only thign I would see/ consider would be the destructive impact that some of these subjects have on some beings but then in a Satanic/Anti-christian/Occult manner, but we both know that with most of these bands it is not the case. As long as it brings the „devil’s work“ is the right manner and the band stands behind what they preach it is Black metal.

What do you think about Black/Death Metal trends of the last years? Musicians call their music goat metal or give other names to it. Do you support these sub-genres?
Haha goat metal is a good one… I don’t care, bands can name they music as they want, it is none of my business,concern and none of my interest neither, it is just funny sometimes to see with which terms some of thema re comming up with.

What do you think about Black Metal bands getting popular and changing their status? For example they play festivals in front of thousands of people. Do you personally prefer playing for thousands or for 100 real die-hard fans in a filthy bar?
I definitely prefer to play indoor, in a good venue with good conditions, I do not care if the bar/ club is dirty as long as we have what we need to deliver a good ritual to the audiance and are ebing treated with the deserved respect. I hate Open air festivals in general at a few exceptions, especially when BM have to play in full daylight, it is just ridiculous.

As a supporter and listener of metal music. What do you think about the vinlys are getting more popular nowadays?
Vinyl was, is and will always be the best support for rock and metal music, once again at a few exception; I’d rather listen Aborym on CD but a Mayhem, Sarcofago, Necroschristos or Teitanblood suits the vinyl format better, but again: my own opinion.

Last question. Do you support printed zines ? And what do you want to say to our readers?
Of course, printed zines are the best and logical thing, always favor the real thing rather than the virtual one.

Many thanks for taking the time for this interview.
Thanx for the opportunity, Khep’r!!