You’ve been into the scene thrash metal’s golden years, 80s, you recorded 5 albums so far, the bands that are on the scene those days have at least 10 albums, and especially there’s many time between your last three records, what are the reasons of delays?
Well, actually we’ve released a fortunate demo-tape in ’88 who sold 1200 copies back then (a record for an Italian band) another one (less lucky) in ’89 produced by Geordie Walker of Killing Joke, an vynil EP in ’90, released for the European and British tour of ’91. Our first cd was recorded in ’92 but released in ’93 and, for instance, before releasing Collapse in 1999 we composed and recorded almost 40 tracks…. This just to clarify that we release just what we think is really "of our own". Another motivation is that all we did and what we do is self-produced and we’re not that rich…..! 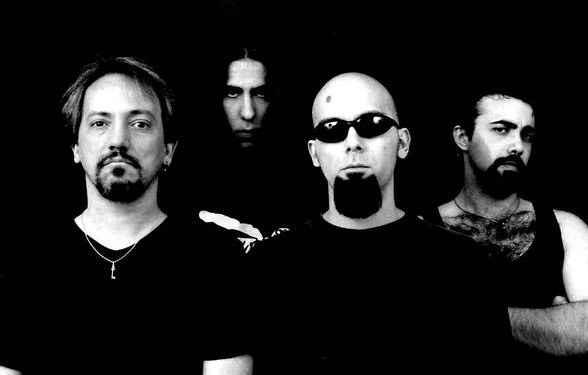 I got to know Braindamage after "The Impostor" album, I don’t know about your other albums, this album has many progressive influence, your style is more modern then the other thrash bands, was this the same with the old albums too? To which way is your band’s musical change since 88?
Every cd we produce was different from the previous one and much more different from the follower. The Impostor is not deviating from this rule we applied for all the releases. We’ve been following a path of uneasiness even amongst an extreme genre as thrash metal used to be. Our inspiration, or at least one of the main ones, was Deception Ignored, by Deathrow as well as Voivod, Mekong Delta and many others, as Killing Joke. We are bounded to the extreme and the weird, always against the stream. 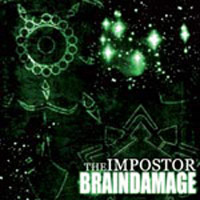 I liked "The Impostor" album, what are the general reactions? Besides the reactions from the media, I wonder the reaction from the old headed thrash metal fans…
Well, it is pretty soon to say, the album has just been released, but I can tell you that among our followers has been accepted with enthusiasm.

I receive many promos from Italy, in the past days, I asked a band how the scene is, they answered "Bad", but there are many bands and labels, so I’m confused. Dracma Records is the one of the labels, how’s your agreement with the label, where does it stand in the Italy scene?
Ok, I tell you this: the scene in Italy does NOT exist. There are many bands, some good and some bad, bust most of the superstructures, as labels and management are simply the worst existing all along the planet. What is more, metal have had a decentseason back at the beginning of the nineties, but we are sinking into a maelstrom of shitty sub-culture and the proclaims of the catholic church. All that is different from what our grands told us is considered evil and the youth is following things like Madonna, Lady Gaga, Big Brother and everything that is not involving any kind of commitment or quest for your inner-self.

Do the signs on the "The Impostor" album cover have any meanings? Could you talk about the cover design generally?
The signs on the cover are: the Citadel of my town, Turin, the Rose of Yorkshire and the star in the foreground are the Hyades. The Impostor is another chapter of the story I am trying to tell since 21 years, it begins in a small town of Yorkshire at the end of Summer in 1066, continues through the centuries, passing through my town in 1706, and ends in Yorkshire again, in the next following years. The characters involved are tools in the hands of struggling aliens powers. The Impostor is one of them, he believes to be a Saviour, but he’s the Herald of Destruction and when he discovers it, instead of repent, accept himself as he is: the impostor. 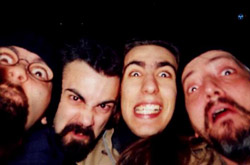 Your website isn’t up-to-date, for example "The Impostor" hasn’t been added to the discography, don’t you care about your website?
You are right, we are actually trying to update all our sites but, to be honest, in recent times Myspace has made obsolete the classic website.

In the last years many new thrash metal bands emerged in my country and world wide, there are bands woh try to carry on with the 80s thrash metal, what do you think about them? Except for certain bands, I like modern works more and I don’t like most of old schoolish new bands, they seem like posing, what do you think about that?
I absolutely agree with you. I love Thrashmetal and it is what I am still trying to play, but I also think that music need renewal, without losing its identity, that is clar, but I cannot find the point in trying to imitate the classic oldies of bay area: we must evolve to survive, keeping our roots firm in the ground of our past.

As a deep-rooted thrash metal band, to talk to the ones who try to do new things for thrsah metal, what do you suggest?
To make what artists, writers, and thinkers did at the beginning of Renaissance: to discovers the classic, improving their works and making it actual and superior to the non-culture of the Middle Ages(the ones we are living through!!). 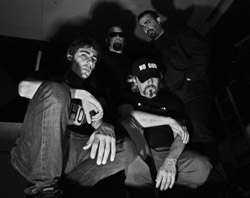 How does social life infuence your lyrics?
A lot. I don’t want to be one of those stupid, brainless, slaves of the Church, bowing before the new Master to come. We are always been by the side of the pauper, the exploited and those who are discriminated.

You’ve shared the stage with many legendary thrash metal bands before, which is the moment you couldn’t forget? What about the new concert plans?
I’ve got nailed in my heart the concert at London’s Astoria in ’91 at the end of the Tour with Killing Joke and the gig with Voivod in ’97, one of the best moments in my life… Now we are signing for a good management here in Italy (probably one of the few, as I said before), and I hope that big things are going to happen for us.

That’s all I ask, do you have anything else to say?
Yes: do not follow those who say that truth is just on one side.
If we are still playing, -and we do not do it for money- is because we are still happy of it and because we think that there’s still more to be said. Thanks a lot, I hope one day we’ll be playng in your country.