Hello Arath, how are you? Congratulations on your album. Could you tell us a bit about it?
We are fine and currently very busy with further releases! “Grimrik – Eisreich” will be released on CD end of November 2014 and “Murgrind – Inheritor Of The Forest Throne” will be released in early 2015! Additionally, we are working on the next ARATH release! The first album is like an introduction to the warrior ARATH and his challenges, learning about his fate and visiting different places in a fantasy world. It is produced in the style of the old-school Dungeon Synth. People who know the old roots of Dungeon Synth will appreciate it! 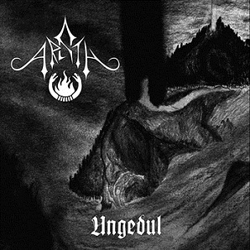 This album is part of a trilogy. Could you tell us a bit about the trilogy and what did so far happen in the first part?
See question 1. first. ARATH learns about his fate, rises from an unknowing man to a warrior that has clear visions of himself being king one day. At the end of the album, he falls into a deep delirium resting by the fire and goes on his way over to „Ungedul“, a twilight world where he encounters the darkest depths of his soul. This story is told on the 2nd album „Ungedul“.

What will happen in the second part and will there be maybe a bit of a change in the sound?
As you know, this album has already been released in September 2014 and is pure old-school Black Metal with a Dungeon Synth intro and outro. ARATH has to master challenges that are given to him by his mind and fate itself. The atmosphere on this album is very dark, evil and desperate, therefore it had to be told in the style of Black Metal.

The lyrics a made in a complete fantasy language. How did you come up with that?
The fantasy language was Grimrik’s idea. There are so many bands singing in Norwegian, English and German, there had to be something outstanding to show that we are not another usual band! And it sounds like a very old language with roots in old germanic languages and also has hints of the languages that Tolkien used in „The Lord Of The Rings“.

Your music is a dark medieval synth in the vein of old Mortiis. How do the lyrics fit into that?
We only partly agree with the thesis that our music is (only) like old Mortiis. There are of course some influences by Mortiis you can hear but there were also other influences and, of course, our own style. The lyrics fit into that because the ARATH releases tell a story in a fantasy world – a fantasy language naturally underlines that.

Could you tell us a bit about your background (previous projects/bands) and how did Arath start?
In the mid-90s, Grimrik, who is deeply rooted in the early 90s Black Metal scene, had two main projects: Nazgûl as a Dungeon Synth only project and Dysterwald, which was mainly a Pagan Metal band (together with now again ARATH member Solvalt). Two demos were released in 1996 and 1997 (you can find them on the Deivlforst Records Bandcamp site as well, see the last question). Meanwhile, the Black Metal scene changed a lot and Grimrik felt the need to get out of that scene which was becoming commercial. He already had invented the idea for ARATH and also had created the first version of the ARATH-logo. The project fell asleep for a long time, in which some songs were written but nothing was released. In 2012 Murgrind and Grimrik met (again) and they felt the need to make music together so the old idea for ARATH was reborn! Then, after the first album was completed, Solvalt joined these two as a guitarist/bassist/songwriter and completed the now three-member-band ARATH, which made the development possible that happened and still happens.
You can hear some of the pre-versions and earlier ARATH songs on the Deivlforst Records compilation „Treasures From The Dungeon Vol. 1 – The Untold Tales“.

What influences your music and lyrics?
We take our musical inspiration of course from the old heroes of Black Metal and Dungeon Synth. To name a few: Burzum, Darkthrone, Summoning, Emperor, Gorgoroth, Mortiis, Pazuzu. The lyrics come only from our minds and are totally tied to the story of the warrior ARATH and how we understand his development.

Do you also do live gigs or is Arath a project which releases only albums?
There will be no live shows by ARATH in the near future. Have you ever seen for example Burzum, Summoning or Bathory live?

Any last words?
Thanks for your and the reader’s deep interest in our music and the story behind it!!! You can see all our releases here: deivlforst.bandcamp.com. If you are on facebook, make sure you follow facebook.com/DeivlforstRecords. On VK: vk.com/deivlforstrecords.

DIALECTIC SOUL ''We Are Born From The Pain''