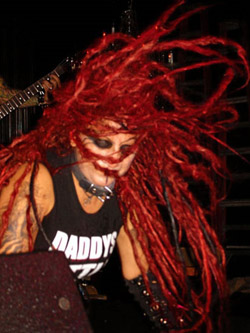 Hello Wykked Wytch.It’s been almost two years since you released “Memories of A Dying Whore,” what’s on the horizon for the Wytch this 2010? How’s that new album coming along?
Ipek: We just finished touring in Europe and finally started working on a new album, it’s half way done when we are ready we will be in studio.

What I find most interesting about your last album is its release via Perish Music Group, which I’m assuming is a label you founded on your own. What do you seek to achieve with the PMG aside from its being a vehicle for your band?
Perish is our label and we are planning to release all our future albums self financed simply because we are tired of dealing with labels bull shit and ripping us off. We are in control of our own finances we know how much we need to spend for recording and and how much we are getting back from Distribution,

So do you actually spend a lot of time scouting for potential talent nowadays or is Wykked Wytch still your ultimate priority?
Both.but Wykked Wytch is my baby and it comes first.

Since “Memories of A Dying Whore” was your most succesful album to date, did the writing and laying down of the tracks prove more intense than all your previous work combined or does being in the studio feel natural to you?
We always worked very hard to produce great albums but of course as the time goes on you get better with riffs and lyrics what I mean by that is you get better at with more experience of coming up with songs and sound it all comes together with many years of playing. You don’t go to studio everyday and start a riff saying “ohh maybe this will work” that would be too costly we are not Metallica after all.you do all your work at home and when you are 100Percent done and comfortable with tunes than you start recording.

Do you have a favorite review or comment regarding “Memories of A Dying Whore”?

Believe or not we have received so many great reviews from this album like never before so it’s hard for me to remember. But here are some cool comments:

“Cool As Hell And Metal As Fuck”
– OUTBURN

“Truly One Of The Most Twisted, Intense And Skull-Fucking Releases Of The Year”
– SOD MAGAZINE

You cover every aspect of your own music. When you began Wykked Wytch back in the mid 90’s, did you ever expect it to survive this long and grow?
Yeah. I wasn’t thinking about surviving but just making music that I love but now looking back it has been a long struggle and fun journey.

Considering how long the Wytch has been in the U.S. scene and the fact that you’re better received in Europe, you’ve had the opportunity to tour with so many great bands. What is the worst and best part of traveling with the members of Wykked Wytch?
No band members likes being with the same guys on the road for a month and sleeping and smelling their farts,so that’s the bad part..the good part is you may have a new band member you get to know each other better and everyone is having a big party not worrying about their day time jobs, it seems like band members always happy on the road, no excuses for not showing up for a show..big vacation and paid for it. 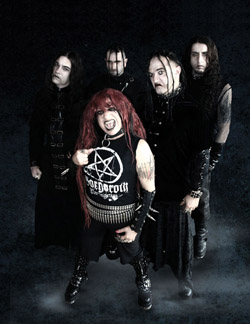 You’re a trailblazing extreme female vocalist. At what point in your life did you decide to embark on the straight and narrow path of extreme metal? Do you believe you’re getting better with age? We do.
Thanks for saying that. I think I was like in my late 20’s I began to show rage and anger towards society so naturally metal music gave me the tool to release my depression and allowed me to cope with my violence through my music and my lyrics. of course you get better with age, you think twice before you wanna smack someone or getting wasted before the shows, you take your job more seriously as you get older.

Wykked Witch has had its fair share of lineup changes over the years. I’m pretty certain you’ve become rather thick skinned about members coming and going. What do you think are the ideal ingredients that would keep a band together for at least a productive span of time?
There are many different reasons for lineup changes over the years. Mainly it always comes down to one of these: drugs, lack of dedication, personality conflict, musical differences, or family/lifestyle changes. It’s hard to find a group of individuals with the same goals for an extended period of time. we are not alone, many bands have this line up issue, there is no formula.

If you had the power to better the conditions for independent recording artists, what would you change about the music business?
I would get rid of all the crook labels and promoters stealing money from bands, I would allow all the bands be in charge of their finances and merchandise. And find a way stop leaking albums on line for free downloading which is hurting small bands rely on small sales from CD sales.

You’re into true crime and murder. It shows in your lyrics. Have you ever contemplated the reasons behind gruesome acts of violence that target prostitutes and women?
No but this is a facts of life and happening everyday crimes against women and kids. Basically I’m very much antiwar against women.

You’re a proud (I assume) Florida resident. How often do you run into old people? And how much has the metal scene deteriorated in your part of the world?
Sure I’m proud being a Floridian i drive everyday. And yes Metal scene has become a nonexistence here and pop and rap culture has taken over. Very few metal shows takes place and yes we have the most well known death metal bands live here and yet they don’t even play here in their home town ,, funny huh? 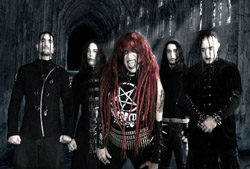 How long do you intend to keep at scaring children and retirees with your hellish music? How big a discogrpahy do you want to forge for Wykked Wytch?
Until my blood dries out, i would like to record an album every 2 years .

If you could open your own club, what would you call it, how often will the ‘house’ band Wykked Wythc perform in it, and what kind of interior will it have?
Wytch’s Nightmare. i think that would be cool name. maybe every Sunday Wykked Wytch will play ritual for church goers.Interior of course will be red and black it represents life and death .

Thanks for the time Ipek. It was lovely. Would you like to leave a message to everyone in the ‘bedroom’ black metal scene? You know, those guys who think they’re the second coming of Burzum and keep on recording demo albums all by their lonesome?
Well I thank you for the support. as far as the losers who has no goal other than jerking off to noisy recordings in their bedroom. Stay There!
Hailz to all fans who support metal and are loyal!