“Yesterday… Now… Tomorrow… Ever”, the With All The Rage debut album, will be out on August 3, 2012.
With all the Rage contains in the name the deeper meaning of grudge fed by the guys towards Sicily, a land stained by the conspiracy of silence and bigotry: ANGER. And the “anger” characterizes the WATR’s sound, where a good mix of Northern European metalcore and robust American thrash metal meets an open-minded melody and a solid groove. 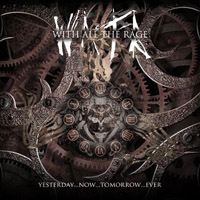