Here is one of the recent interviews that I made here in Budapest. This one, with Walls Of Jericho vocalist Candace, has been done in mid July before their local show.

Requiem for a Dream 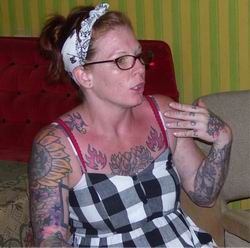 Earlier this year, you toured with Earth Crisis in the USA as you already did in 2000…
Candace Kucsulain: Yeah! In 2000, we opened up the show. It was a five band bill with us, Skinlab, Earth Crisis, In Flames and… not sure who else… And it’s kinda nice that on this tour, we were the main support. I got a lot of good reactions to their new album as well – usually, when a band releases a reunion record they don’t get that great of a reaction. We’re very, very happy for them. I think they are a powerful band and they have a great message. I do hope that more people will listen to them and that they will get back out there and continue to spread that message. Hopefully, they’ll spread it over here in Europe, too. I know that they haven’t been here that much. We’ve done a tour with Freya which is Karl’s (Earth Crisis vocalist Karl Buechner) another band, too …

…And you performed at major events like Family Values and Ozzfest. Is it useful and prestigeous for a band like Walls Of Jericho to do shows like these?
Candace: No, not really. I mean it’s supposed to but at this point it doesn’t really matter. When you get the opportunity to do something like that you should just take it. It’s just like a Summer camp: you hang out with all your friends, you get a chance to play for thousands of people who are ready to go crazy… and there’s nothing like it. The experience of Ozzfest, those times I will always remember. I will always take it with me. But as far as what it actually does to your band in the music scene, you make people think that you’re sold out. You pay a lot of money to be on that tour and no-one really saw much of a benefit from doing that, except for the experience itself. But we’re not really doing it for the benefit, you know. We’re taking opportunities as they come and what we get is what we get. That’s how we feel about it. 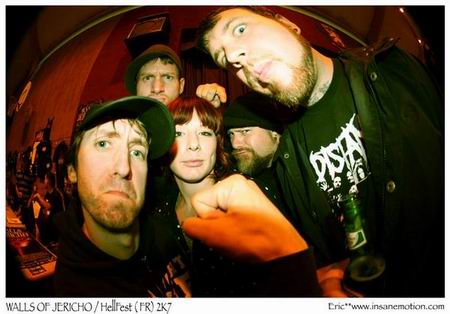 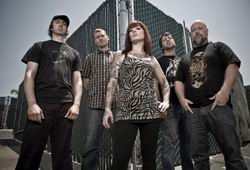 Are you more popular here in Europe or in the USA?
Candace: Here in Europe, for sure. Our kind of music lasted longer over here than in the USA. Unfortunately, the States are based on trends. They come back in full circle within a year and a half. In and out, in and out… There is no loyalty. Yet, there are some hardcore kids out there who stay true, they are very, very… hardcore… They’re almost elitists because they only like certain types of hardcore. It’s kinda interesting but I do understand and respect that. We’ve been tossed into this metalcore thing and I remember when that word forst came up the definition of what we were doing was called metalcore. Some kid said it in an interview and I was like “What are you talking about?” There was never that before. We are a hardcore band because of our message. We do have metal influences but there’s nothing wrong with that. We mix both together but I think it’s our attitude and our way of life that makes us hardcore.

Do you think you have something to do with the metalcore wave that came some years ago?
Candace: Probably. But I’m sure any band at that time could have had. We’ve been around for long enough to have some kind of impact on all those bands, of course. But there were a lot of bands still at that time that had impact on us. So I think of it that way. 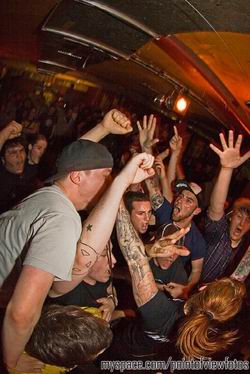 The band was on hiatus from 2001 to 2003. What was the reason for that?
Candace: We lost our drummer. Wes Keely, the original drummer of Walls Of Jericho decided that he wanted to go back to college because at that time hardcore bands didn’t make money at all. We went on tour for a month, then we came home and had jobs to pay our bills. There was never any idea that the band could get bigger, that we could be on a tour like this, go to other countries or anything… So he went to college and we worked full time. We couldn’t find another drummer so that was it, we had to take a break. There was nothing else we could do at that time. About a year later Alexei Rodriguez who was in this band called Catharsis had up Chris (Walls Of Jericho guitarist Chris Rawson) and I and asked us if we wanted to do a band together and we still wanted to do stuff. It’s just that we went through like five drummers and couldn’t find anybody who’s fit us. We don’t have the type of personalities to hire somebody. We need someone who gets along with us. It’s too hard to play with people that you don’t like.

Let’s talk about your music and your latest releases a little bit. Where did the idea of the fully accoustic Redemption EP came from?
Candace: We wanted to do that for years but never had opportunity. We met Corey Taylor (producer of the EP) on Family Values. He listened to the song called No Saving Me and we were like “If we ever want to write more of this type of songs would you love to be a part of it with us?” We had time off and my mom has passed a year before so I wrote a song about her – and we already had the songs together. I will never forget the experience, that’s for sure. Even though we’ve done one song like that on each record you do one song and that’s it. But doing five songs is a lot. It’s completely different going into the studio like that. I remember singing and going like “Oh my God, I suck! I should just go home. What am I doing?..”

And how did you choose to cover House Of The Rising Sun?
Candace: I brought up the idea because that song is awesome and I thought that maybe we could do something different to it. Everyone was like “Yeah, of course.” That song has been around for my entire life, it brings back crazy memories, and so there was no discussion needed. I remember about a month before we actually recorded the song, The Animals came through to Detroit where I live and they performed that song and I was like “Yeah, we’ve got to do this for sure!” 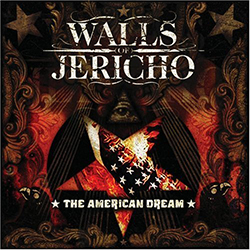 What is your greatest achievement with your latest album The American Dream? Did it make you more successful?
Candace: I would say no, ha ha. We got good reactions, though. I like this record the most musically. I think my vocals sound stronger than they ever have. It took me a long time… But now I’m able to control my voice instead of letting my voice control me. I never learned how to scream. There are some people who know how to scream right so they don’t damage their throats. If I go on tour there are days when I can’t talk because my voice is so messed up. I need to push with everything I have in order to get that coming out of me and I know there is a way to control it and to be able to do this weird scream right. But when I do this I sound like a high pitch turdetto. That’s not the sound I want to come out of me so I try to push it differently to have a lower voice. So I think this is the best record we put out musically but we don’t have much of a presence with our label here in Europe so a lot of people don’t have the new record.

You mean Trustkill Records is only big in the USA and not able to keep up with the progress of your career?
Candace: Yeah, I think they’re only strong in the USA. Our next record will not be released on Trustkill. We need some one over here. It’s completely unfair for us to be a toruing band in Europe and not to be able to give out CDs.

As for the lyrics, do you consider The American Dream a concept album?
Candace: No it’s not a concept album. That’s really just only one song that happened to be the title track of the album. The record wasn’t going to be titled, it was only going to be self-titled: Walls Of Jericho IV. But while making The American Dream, we had huge discussions about the new world order and all that kind of stuff. Crazy things floated around while we made this record… So we decided to base the cover art off of that song itself because with what’s going on, the recession and everything, Detroit is falling apart. It’s like dead in the water at this point. We’re watching all of our freinds and families struggle, we’re watching their business go under and it’s devastating to see. We got many people thinking that this song is anti Amerika but 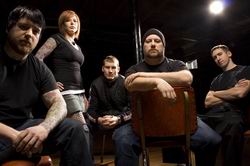 From the publicity / marketing point of view, it’s definitely an advantage for a band to be female fronted but have you ever felt any setback of it?
Candace: Yeah but that only made our band stronger. Some people thing we’re a gimmick an don’t take me serious. But I’ve been doing this for eleven years so it only makes me fight harder. And maybe I proved my point, maybe I proved that I’m a force to reckon with. What can you do? What can you say? Everything has already been said about our band and we are still here.