With unapologetic contempt Vulture Locust continue their dystopian vision of a world gone mad – dissecting police state brutality, martial law, and every conspiracy under the sun.

Recorded/mixed/mastered ever so brutally by Nathan Richardson (with additional mastering by Robert Nelson of Glorious Usurper Studios) this unrelenting destroyer of an LP re-records all the tracks from their earlier promo “We Need To Talk” plus fresh material.

Hailing from Portland, Oregon, this two-man unit will be performing live heavily throughout 2015 on the West Coast. Future European dates and festival performances are on the agenda with guitarist/vocalist Ryan Bartek performing alongside a stand-in drummer. On March 3rd, 2015 “Command Presence” will be released as a free download at the bands official website: www.VultureLocust.com 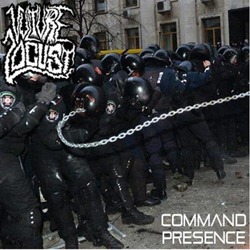