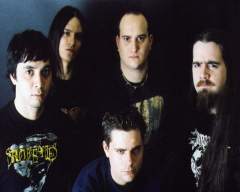 US death metallers VEHEMENCE have decided to quit. Here´s the official statement from the band:

“8 years after it all started, we decided that now is the time to throw in the towel. It was fun, and we would like to thank all the people who have supported us along the way. Vehemence was and is a huge part of our lives, but at this point its time to start fresh. The death of VEHEMENCE has since spawned 3 new bands from its ex members. ABIGAIL WILLIAMS featuring Mark, Andy and Bjorn of VEHEMENCE (www.myspace.com/abigailwilliams), HE WHO BINDS HIMSELF featuring Nathan (www.myspace.com/hewhobindshimself), and as John stated ´I´m looking for members for a new band and I am also available for touring. Currently I´m also affiliated with several other side projects which I will release soon.´

“We still have a batch of new shirts coming this year, as well as a new remixed version of our first self released disc entitled ´The Thoughts From Which I Hide´, that will be available exclusively at www.vehemence.com. VEHEMENCE may do shows every now and then, but will not be a full time band. Just keep checking our website as that will still be up and running.”