You have just entered the scene recently, what are your expectations?Promotion of your first EP is really good, but I must confess that I find it rather short. Was that for the introduction of the group? When will you release your new records?
Well first of all. Many thanks for the opportunity to share our group philosophy with Extreminal.
You`re right the EP its pretty short. For us is just an introduction of our feelings and metal motions. We are a very united crew, so for many years we were planing to play together (for more than 2 years). Finally one day we start to release music and our first EP is the result. 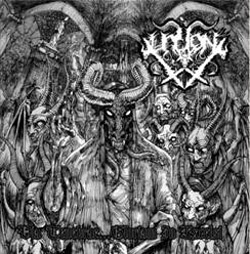 Why, in general, there are only few death metal groups releasing albums on occult and satanist themes? Gore themed death metal is more popular compared to early 90s when the themes were darker, more occult and more demonic. Why, do you think, the number and popularity of gore themed groups are increasing?
I think its a mode. But in my vision it doesn`t matter cause everybody use their own influences to create metal. In some people cases probably be gore, others with social issues.
It depends mostly of your personal development and of course your education. This is critical to form your ideology. Then guys start playing diferent styles of metal.
In our case we have many influences from the 80`s & 90`s bands. From the mexican, american and scandinavian scene. We are rebels and of course we hate the control over people. We just follow the real essence of human nature. We make that we feel.

Can you say satanism main theme of your band ?Specially i would like to talk about your t-shirt design ther are some notes written in Latin language ,could you tell about this story?
Yes this is the most important topic for us. We write all the themes in latin language because for many years was the official language of the catholic church. In our country the spanish knights forced people to belive in their idols. But for us not exist human power that can force man to have the same belief, we believe in similar things but never equal BECAUSE ALL HUMANS ARE DIFFERENT, thats why we worship and play metal as rebellion.
The words that you mentioned means: FIDELIS = FIDELITY for the scene, HONORIS = HONOR for camaraderie, GLORIAM = GLORY for triumph, VIRIS = FORCE to defeat enemies, FLATUS = PRIDE to be a metalbanger. FOR US THE 5 PILLARS OF UNCION.

Could you mention about the scene in Mexico? Is there a broad black metal or death metal scene in there?
We have bands of many kinds of metal. The scene here starts since 80`s with bands like MORTUARY, BLACKTHORN, PACTUM, SHUB NUGGURATH, others form the 90`s as CENOTAPH, HARDWARE, THE CHASM, DISGORGE and many more. Some of this bands are disintegrated but their spirit still alive. Right now you could find many good bands of Black metal like WARFIELD, AVZHIA, ERESHKIGAL, MORBOSIDAD and bands of death metal like: DENIAL, HACAVITZ, PULVERIZED,ZOMBIEFICATION, RAPTURE. Even bands of doom like MAJESTIC DOWN FALL or Thrash as STRIKE MASTER, PROFANATOR, TIKET TO HELL & PIRAÑA. The list is very large. But as you know we have to much variety of bands.

A lot of friends of mine, who tried your music, commented that your style has some influence of DECIDE. Do you agree with this?
Yes…. Definitely we have DEICIDE, SINISTER, SUFFOCATION and many much bands influences. We grew up lisening this kind of bands.

Regarding the strong promotions of your band, it seems like you are aiming high. Wasn’t it hard to promote your album on your own?
Belong to the legions of metal is always sacrificed, but the honor to share and play with amazing bands definitely worth it. The promotion has been difficult as you coment. We are not agree to sign with a total comercial label so we are looking for one relative underground for the next release. We have friends with international labels interested to work with us. So the opportunity to be more comercial exist. But in this moment we are planning to release no more than 1000 copies for any release. To keep more the underground essence.

Are you planning any tours after the release of your album? Which countries or fests will be first?
We played last week with DENIAL & ZOMBIEFICATION in Queretaro. We will play in the capital of Mexico very soon. But definitely the next year its probably that we play in CHICAGO, NEW YORK, CLEVELAND and LOS ANGELES. We are planning this. And some festivals in Mexico like ABOBINATION FEST and more. The opportunities exist is just matter of time and organization. You will see the flyers for future concerts on our website & myspace. 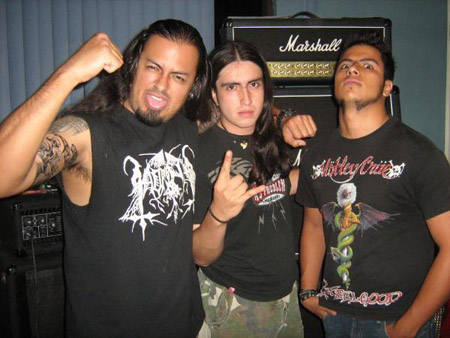 I ‘d like to talk about socia networking as you know there is so much popular in recent days,How much is important for a death metal band ? I mean social networking like myspace,facebook,twitter etc. Is Uncion want keep underground or want to benefit of these kind of things ?
Right now we have myspace. And our web site its under construction but definitely we will just leave myspace & website no more social netwoks. We know its important but for us its enough with this.

What do you think is the most important element in a death metal group? Vocalists, drummers or guitarists who know the drill?
We cannot think in one particular. All the members are important.
It depends who`s the leader of the band or the leaders.
If you change some member of any band obviously the style will change. Some cases its more easy to hear this some times dont.

I dont really like this kind of questions but the name UNCION seemed different to me. Could you mention what it means?
Uncion was taken from the spanish sentence of the catholic church EXTREMA UNCION, is when given a special grace to the sick or elderly, strengthening and conforting the christian weakened by illness, and prepares for the final encounter with god. Obviuosly we take UNCION as the opposite of this rite.

Lets talk a little about the other band of the members, you are in Mutiliator, Profanator and the Pit. How is it going in these bands?
Its very common to find gang members in our city (Queretaro) in other groups. We live for metal and of course we never get tired to continue creating bands or playing in others. 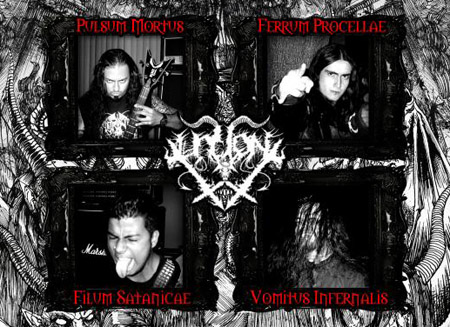 Everyting its going great with the other bands. MUTILATOR has finally released his album named “AT THE END”.PROFANATOR its planning to take a tour in EUROPE. And THE PIT prepares to record the new album. The same with UNCION we gonna record a split wih 3 New songs: We are talking with some bands to release this SPLIT. We hope to release this split in two months. So everythig its like the metal needs to be ……. Great.
It’s a typical questions of Extreminal. Ready? To be a bunch of musicians you are what kind of show will impress you much? 30-40 Of die-hard fans or 1500-2000 of festival followers?Which one is more important to be a opening band of a big festival or litle pub concerts?
For us in particular its very important the quality of the show and the cartel too, I mean the bands to play with. If there are 100 guys or 5000 its not a big deal we will play hard as always. But definitely we care to play in concerts with die hard bangers and some festivals with good cartel as RITES OF DARKNESS (Houston), METAL IN THE FOREST (Mexico) even if we could play some day in the MARYLAND METAL FEST (Baltimore) We normally never think in the number of persons and if we open or we are the central band. We just care the quality of bands and the scene.

Thanks for your answers. Finally, we can take your messages for the Extreminal.com readers…
Its a pleasure to share with you Cenk (a metal maniac like us!!).
Thanks a lot and regards from the aztec empire!