Typhon are a withering maelstrom of infernal noise from the blighted American heartland. Theirs is death metal soaked and sautéed in blasphemous juices. Such is the uncompromising nature of Typhon, who’ve lurked in the underground long enough for a few super-obscure demos until the inevitable compelled them to finally release a full-length this year. Speaking to Extreminal’s prodigal scribe, singer/lyricist Savnok reveals the secrets of the black arts.

I was fucken blown away by the sheer power of those sample tracks you made me listen to. Where did you guys go to record your songs?
Savnok: All of our material up to this point has been self-produced, as we had until then not met a good metal producer so it was our intention to become self-reliant. We are not going to record the full length just because of an issue of time and our guitarist Zach was robbed of the majority of his equipment. But in the future when we have accumulated more recording tools and skill we may return to this.

You have to excuse my enthusiasm at the first question. I just get too many shit demo albums on a regular basis so listening to such a finely wrought product as yours is like a breath of fresh air. How long have the four of you been waging war together?
There is no need for an excuse, as it was well received! Nolan (drums), Zach (guitars) and myself have been together since 2006, and gone through numerous members featured from such acts as Anwyl, Stonehaven, and Othis, in 2009 Drew Frerking (guitars) of Garoted joined on guitars and it has been a match made in disharmony ever since. 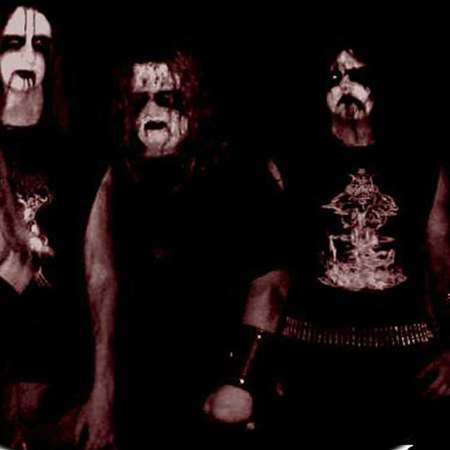 What kind of background does each of you have? Anyone start playing violin at age 5?
No, we have played with some classically trained musicians but it never worked out in the end. Our skills have been forged out of our own passion and dedication over the years.

So how many lesser bands had to die before Typhon could be born?
Before I was drafted in Zach and two other ex-members of ours played thrash metal in Rancor. When I joined that band was ended and Typhon was conceived. Nolan has played in various bands before us, whether these are of merit or not these influences can still be seen today, although the sound has changed so drastically 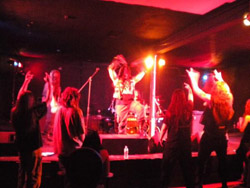 The way Typhon’s music sounds…it’s immense. Layers upon layers of incinerating blast. A total blackened death metal juggernaut. Has this always been your vision for the band?
In the early days we played very primitive black/thrash however in recent years our skill had grown to where we can express our convictions and ideology in the way we have always envisioned; aggressive and hateful black/death metal that stands apart from the drones of the current scene.

I look forward to the 2011 album you got in the works. Want to give me and the readers an update?
It will feature all of the tracks we have been working on in the past two-three years in a proper production in every sense of the word. It’s going to be self-released and distributed and recorded at Earbled Studios with Travis Kerally, the one responsible for the latest Garoted assault.

You already sent me a pic of the debut album’s porntastic cover art. Whose idea was it to have all those nudes drenched in crimson?
The Colombian maniac Daniel Self-Desecrator [is responsible]. To us it represents the face of negativity and evil corrupting beauty and perfection, literally. The maniac also is responsible for our logo. 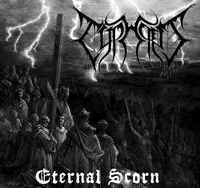 Until its release, all we’ve got to munch on is the lean 2009 “Eternal Scorn” EP. The cover art was impressive, but it is rather short at only three songs. Why the scarcity of material?
The purpose of the EP was to have some decent material out to represent our change in sound and lineup, as we had only put out the harsh demo and the re-release of it, we needed something to represent us in a better light until we have finished the LP, which has been construed in the past because of line up turmoils. Originally there was going to be more tracks on the EP, but we had to drop them due to eqiupment errors in the drum recording process.

Your discography up to this point includes last-last year’s EP and a 2007 demo. From your first recording until now, how much have you earned about the nuts and bolts of music recording? Are you more comfortable laying tracks today than you were, well, years ago? How much do you still want to know?
Of course, but until now recording was a much more personal thing where we just were lodged in a basement for weeks, more so a process of trial and error. It would take too long to list what we want to acquire skill and intellectual wise, it will reflect in our propaganda that will grow in the vein of hate and punishment every passing day.

How many gigs does the band have under its belt? What kind of venues does Typhon usually perform in?
Probably 15 or 20 since our beginning. I book mainly at the Oz Cafe here in Wichita, as Ramero is one of the few people in Wichita with the interest of keeping metal’s integrity. Out of despite for the early shows and bands we played with and the lack of support in other areas of the state I formed Gospel of Hate Productions to book true bands and unite the Midwest with our annual Praise of Deathfest and Wichita Extreme Metal Festival, putting together local acts along with bringing in touring acts with the aide of Joe and Live Evil Promotions. 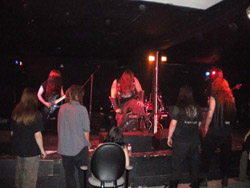 With the bands I interview, I always want to have an idea of their cultural background. What part of the USA do you call home? You guys live near each other? How’s life?
Zach and I live in southern Kansas, Nolan lives near the Nebraska border, and Drew lives in southern Nebraska. This has proven difficult but not impacting the conviction of us at all. The Midwest is a very bleak place, everywhere but the major cities are meth lab infested farming communities, surrounded by miles of desolate open plane. It could perhaps be called the buckle of the bible belt and there’s a heavy concentration of Mennonites in the southern part of Kansas, as well as general ignorance spread elsewhere.

Aside from playing in a band and releasing your own music, what are some of the coolest things that have happened to you as a metalhead?
Besides meeting, playing, and receiving respect from bands that we have grown up listening to. Seeing people impacted by our music is the most rewarding personally, whether they find strength in our propaganda or seeing them thrown to the ground in one of our pits. Blood, fights, and teeth on the floor during our set are marks of adoration to us.

Deep in your heart of hearts, is the Christian cult your true enemy? When did the inner-war begin?
We grew up with heavy forces of indoctrination on us, here in the midwest. It was followed by being ostracized by our peers when we sought our own paths in life. The resentment is deep for Christianity, more so religion in general. As we grow to see the full spectrum of light, we learn that the human mind is the enemy. All of these works of fiction our society and life is built around is what Typhon stands against. To make the listener question this world, and hate what it represents is what we strive for.

I like prolific people. Pablo Picasso, Thomas Edison, Isaac Asimov. Who are some of the musicians and artists that inspire you?
The list for musicians would be endless but visually the works of Gustave Dore (If you cant tell by the EP), William Blake, Albrecht Dürer, to name a few of many, [are what inspire me]. But what I receive more inspiration from are the literary works of philosophers such as Schopenhauer and Nietzsche 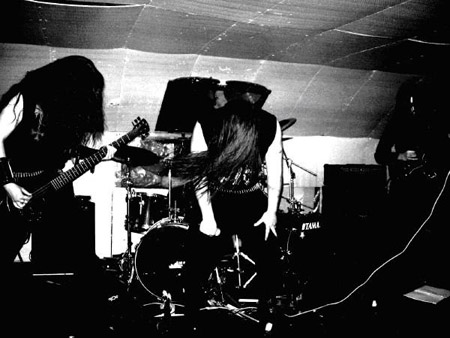 Me, as long as I can keep writing about bands, I know I’ll be a happy metal journalist. What is your personal definition of success in today’s musical environment?
We don’t seek fame or acceptance from the modern scene, underground or not. What we consider as success is our music always being held with the same integrity since day one, unlike some of the bands around today.

What gives you the most satisfaction about being part of Typhon?
Just to be able to unleash a gospel of negativity on people and seeing it mend their path is always what brings me satisfaction and what I will always strive for. 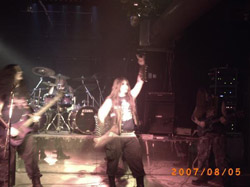 What are the weapons in your arsenal? This is the gear question. *cough* *cough* *cough*
Nolan uses a Tama Starclassic Performer and he is very specific about his Axis pedals. Zach plays Gibson and B.C. Rich. Drew plays Ibanez and B.C. Rich. We are not one of these bands that seek out endorsements like some kind of fucking packaged product, unlike some other acts in this area.

Porngrind or power metal?
Well [I prefer] more acts in the pornogrind than power metal. I have much respect for old Gut and The Meatshits. But for power metal I guess Iced Earth put on a pretty good show and they at least have some aggression in their music and aren’t some fairyland bullshit.

Which has more cred for a KVLT diet, fastfood or farm grown produce?
The first more so, the second if you’re part of this ‘Wolves in the Throne Room’ ‘Green metal’ faggotry. Typhon lives off an appetiate of liquor, beer, pot and psychadelics.

Thanks for being awesome. Name one place you wouldn’t be caught dead in. Me…a barbershop…or a rave party. I like going to the dentist and hanging out inside a library though. And you?
Interesting question. Perhaps some trendy night club or a scene show unless we we’re pulverizing hardcore dancers.