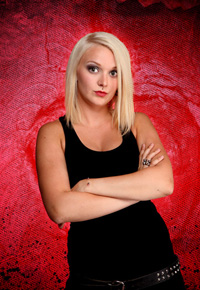 The Way Of Purity announced to introduce our new singer Tiril Skardal.

Tiril, already cooperating with the band behind the scenes, was sked to join the band as new singer and after her acceptance they worked so hard till now to write songs for the new album.

Ater that The Way Of Purity will leave on tour again to complete the promotion of “Crosscore” and they will hit the studios again in August to record the new full lenght album.

Tiril Skardal, born in Sandnes – Norway, is pure and complete artist with an outstanding personality and image.

Music, Drama, Fireworks are the diciplines that she loves.

She described herself with the following words:
“My life is a set of actions, performed mainly for their symbolic value.My religion includes actions which are arbitrarily chosen by me, or dictated purely by logic, chance, necessity.The repetitive behavior systematically used by me is purely made for satisfaction of my spiritual and emotional needs or strengthening and purification.Alongside the dimensions of reverence of my gods, my rituals can have a more basic personal function in expressing and reinforcing my links with the cult I belong to.The earliest known undisputed evidence dates from the Upper Paleolithic.This helped in creating an evelasting and firm sense of my identity.I am running along the methaphysical edge of reality.My expressed wish that some form of adversity or misfortune will befall and attach to your eternity.You can’t protect yourself from the Evil Eye.So gjeng’e ho seg til bekken klar.Vaskar dei sitt silkehar.I berge vil eg liva, og der vil eg doy.Bronfolen loper lett og der er eg kongens festermoy.”