THE WAY OF PURITY release sophomore album ‘Equate’ in US & Canada on 17 April
Distributed in North America by RED/Sony via Basick/Prosthetic on behalf of Revolution Harmony.
There are few bands with a common purpose beyond that of the music they create, who ardently stick to that purpose, thus transcending the vagaries of the often soulless music industry and becoming a genuine force for change. Animal Liberation Front supporters THE WAY OF PURITY are one such band though, and with the North American release of their sophomore album ‘Equate’ on 17 April 2012, via the new non-profit record label Revolution Harmony, they will take one more small step for man and one more giant leap for animal-kind. ‘Equate’ features ten new tracks of brutally blackened and detuned metalcore with synth flourishes, married with empoweringly empathetic lyrics, all trapped in a vicious bass-laden analogue recording. The album was produced, arranged, recorded and edited by Jonathan Mazzeo at Math Lab Recordings, mixed by Wahoomi Corvi at Realsound Studio, and mastered by Mika Jussila at Finnvox Studio. 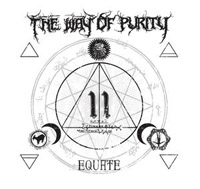 Tracklist:
01. Artwork Of Nature
02. Death Abound Everywhere
03. Eleven
04. Eternal Damnation To René Descartes
05. Keep Dreaming
06. For All Who Thrive Unheard
07. The Mighty Fall
08. The Last Darkest Night
09. A Time To Be So Small
10. Lijty Crjsty
“Always walk on the path of integrity and never act like a normal band, that has always been our promise to ourselves” The Way Of Purity affirms. “Our partners must fight to push our message and mission without ulterior motives, and this is exactly why we have joined forces with Revolution Harmony. When we found out about Ray Holroyd’s non-profit record label, we fell in love with his vision, and with his support we can fulfil our dreams of helping animal and earth protection organizations. This is just the beginning… the revolution starts now!”