Hailing from the land-of-perpetual-metal-mightyness (uh, Sweden) The Generals are four swaggering death n’ rollers whose new album “Stand Up Straight” is a guarnteed kick in the nuts. Be it the chunky opener “Blessing In Disguise” or the bruising “Hell Was Built For Heroes,” for sheer verve and br00tality, these bastards can hang with the best of them (i.e. Entombed, The Haunted, At The Gates etc.) For this exclusive chat with Extreminal’s handsomest staffer (sorry Cenk), singer-bass commando Hednar and Zakk Wylde heir-apparent Rickard talk about everything from dog shit to mandatory army service. Woah. 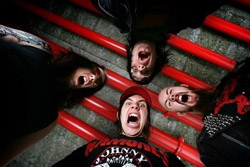 Congatulations for the nasty little album you released, “Stand Up Straight”. I can proudly say that it has zero filler and keeps on kicking you in the nuts for almost an hour. Did you guys give yourselves hugs when you started reading the (positive) reviews of it online? Wait, is it even being reviewed yet?
Rickard: Yes, it sure has been reviewed and it has mostly been awesome. We don’t know about the hugging part though, officially we don’t hug unless we’re all drunk (and naked).

When did it all come together for The Generals? Who met whom? Who came late for the first band practice? What did you find attractive about each other?
Rickard: It all started seven years ago. It’s a messy story but basically The Generals are the remains of a shattered band called Necronomicon. It started out as a side project but we got a gig and people started digging our stuff so we decided to have a go at it. Hednar is always late for everything, Metal (Martin, drums) is really proud of his beard, Dick (bassist) is just that, and Rickard (me) is a serious hypochondriac. Everybody in the band thinks they’re gods gift to women but have never got it confirmed, strange.

What I really like about “Stand Up Straight” is the energy and the fact that The Generals is hard to put in one genre, even if you’re sound is rather familiar. I guess that makes the band unique. How does it feel to be unique?
Rickard: Uhm, I guess it’s a good feeling. Everybody wants that, right? The thing is we never aimed for this sound so to speak, it just happened. 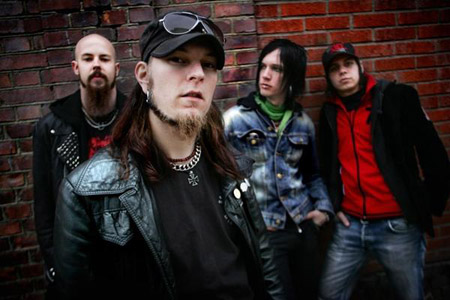 Why does Hednar’s vocals sound like he’s having a bad day? I bet he’s a big fan of the Die Hard movies, where Bruce Willis is always having a bad day but then saves the world from terrorists. Is Hednar into Die Hard?
Hednar: Ok, I’ve sent Rickard off to make coffe so I’ll take this one myself. Yes, sure I like Bruce and the Die Hard movies but I’m really more into Steven. Steven Seagal, that is. If you think I sound like I’m having a bad day I guess I’ve accomplished something. I mean, we’re not The Eagles, we play metal, everyday-is-a-bad-day kind of metal. 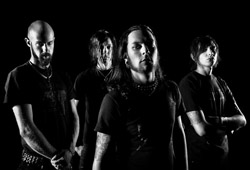 Both Rickard and Dick enjoy their fair share of chunky groovy riffs on the album. Are they an integral part of the band’s writing team or does one egoistical megalomaniac-asshole do all the composing for the band?
Rickard: Hahaha! No, we don’t have a band Hitler. We do everything as a band, including the composing.

My favorite tracks on the album are the tough ones: “Punchline,” “One Eye Red,” and “Hell Was Built For Heroes.” What went on inside the studio when you guys were putting together the album?
Rickard: We either played our instruments or played badminton in the dark with our producer Tomas Skogsberg. Or do you mean how we did the songs? They all saw the light during rehearsal. Maybe they’re hard because they’re made in Vomitory’s old rehearsal room where they also used to make ammunition for the Swedish Army during the 50’s. There’s still gunpowder in the cracks of the walls and the floor.

When did the band’s love affair with Metalcentral Records begin?
Rickard: Metalcentral used to arrange club nights in Karlstad with live acts. They booked us to open for Astral Doors, and the rest is history.

Have you told your parents about “Stand Up Straight” yet? Whenever I tell my Dad I interview bands from all over the world, he tells me I’m wasting my time. Can I have some sympathy, please?
Rickard: You can tell him The Generals thinks he’s a jerk. Without guys like you no one would know about bands like us. So we’re thankful.

If “Stand Up Straight” were a videogame, what kind would it be? I’m actually a big fan of Command and Conquer: Generals, you know.
Rickard: That’s a tough one! On one hand we’ve always imagined our music being good for fast car driving, so maybe a crash car derby kind of game would suit us. On the other hand we could live with a Brutal Legends type of game, where you kill demons with The Generals’ riffs and our fans’ foreheads. 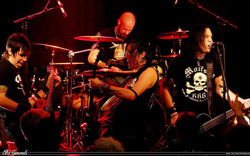 What was the most intensely bromantic experience the four of you have gone through?
Rickard: Basically you can glimpse some bromance after every successful gig. But as we clarified earlier there’s limited amount of body contact in the dressing room.

You’re called The Generals. Is military service still mandatory in Sweden? Did any of you do your time yet? How did you find the soldier’s life?
Hednar: Yes, we’re called The Generals but it has nothing to do with that. Everybody in the band except Rickard has done their time in the army since it’s kind of mandatory but if you’re a wimp like Rickard you’re not allowed.
Rickard: I find it more useful to make riffs with my guitar than running around in the woods of Sweden playing with guns.

Is your drummer Metalmartin a man of steel?
Rickard: No, he’s a man of marshmallows.

How long has the band been cooking up apocalyptic shitstorms in local stages across Sweden? What I mean by this is how often does The Generals’ play gigs? Any nice war memories?
Rickard: We’ve done around 150 gigs in Sweden, Norway, and Finland over a period of seven years. There’s not a lot of recollections from the gigs since we almost always get paid in booze. But generally it’s always fun and we receive a lot of good responses.

I’m sorry but this has to end.
Rickard: Thank you very much for your questions..