The conversation between The Cleasing who experienced Metal Music, Denmark Death Metal band and us…

First of all hi, when we look to your band’s former life, we can’t find so much thing, you look like a new band but when we check your band members former music life, we see they play in minimum 1 band, what is the aim of this band’s constitute? We deem that as a sub project…
Toke: First of all, The Cleansing isn’t a side project. The Cleansing are very much a real band, with real ambitions. We all have previous experience in former bands, but mostly The Cleansing were created in 2007 because Jeppe, Andreas and myself were tired of the way things were in our former band Usipian. We didn’t feel we could fulfil our potential as a band or as musicians and creative thinkers. Playing death metal isn’t exactly a lucrative way to earn money, so clearly we are doing this because it’s fun for us. Usipian wasn’t much fun in the end, se we put a stop to it and created The Cleansing instead. 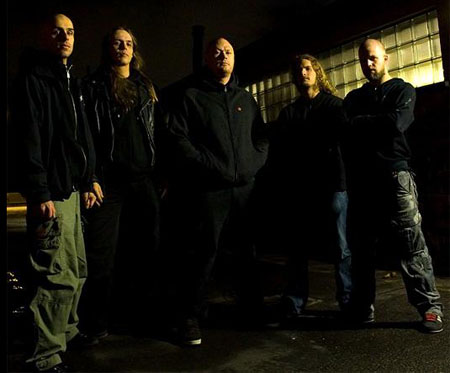 We see Toke Eld from Usipian in your band as vocal but in your album records vocals are your bassist Martin, in that date is Toke not exist in band?
Yes, well it was an unfortunate situation, but I got arrested during the vocal sessions, so sadly I weren’t available. But now I am out and free and working on the next album which we are doing as we speak. Or write really.

You will go on a local tour on April, what do you want from this tour?
We haven’t had the chance to promote Poisoned Legacy yet, so now was just the time to get our asses out and perform. If you want to be taken seriously as a band, you have to get out and play. It is as simple as that.

Your only one product Poisened Legacy has taken a point from a lot of country’s webzines and magazines, did you really like this album?
No we hate it. That’s why we’re doing another one. Luckily most people liked Poisoned Legacy, so hopefully they will like our future efforts as well.

We saw a news from your native language (Danish), we don’t know your language but we understanded that, your band deemed worthy for a metal music award on 2009, can you give some information about that?
Every year DMeA (Danish Metal Awards dmea.dk/dmea09/) holds an awards show for the years releases. It’s not something that means a whole lot, but it gives an underground genre some needed attention to the regular public. The Cleansing were nominated for a “debut of the year” award. We were pretty sure we weren’t going to win, but of course it’s always nice to get some recognition. On another Danish metal website www.metalzone.dk we actually won that category.

How was the Poisened Legacy album’s sales, does your firm give any information about that?
Yeah, but we don’t know the exact amount, but we are not talking millions… haha.

Your shows continues without deceleration, have you got a funny or interesting experience from your concerts?
Not yet we don’t, to this date we have only played two concerts with The Cleansing. But hopefully I have some funny stories next time we talk? Because I’m almost bound to fuck something up playing live.

When did Deepsend Record’s interest started on you? Do you think to work with them in long time or some other plans?
For now we are pretty happy with Deepsend Records, and are not really planning on anyone else right now. We need to position ourselves before we can demand anything hehe. As we are a new band, we need to have some years behind us I think. And better sales numbers! Deepsend was pretty interested as soon as they heard our album, and their deal and distribution seemed like the best of what was offered, so it seemed pretty safe to sign with them. They are also handling our metal comrades in Dawn of Demise, and they were very happy with Deepsend as well. Deepsend are not in habit of promising anything they can’t keep, and that means a lot for us. It’s very frustrating to have a label behind you who promise and promise and never keeps it. Deepsend are not like that at all, so we are pretty happy with them. 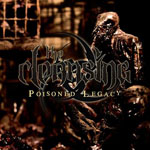 In your album’s artwork, there is a writing about Niklas Sundin from Dark Tranquility, he has an effort on your album, is it true? If it is true, how was this synergy strated?
We just looked at his website actually, where he has some cool drawings that we thought we could use. And then we wrote him an email asking a price and so forth and we got him to do some drawings. And that was that 🙂 We actually ended up using more of his drawings in Usipian (In Skinless Form ep) because we took another direction in The Cleansing. But there is a drawing or two left in the booklet of Poisoned Legacy if I’m not mistaken.

What are the other active band’s names of your band members?
Hmm let’s see, Andreas and Martin are active in Corpus Mortale and Zahrim (his little solo project). Jeppe in Strychnos, Morten in Submission, Arcane Order, Mercenary and a trillion other bands. For now I only play in The Cleansing. We also have Mads from Konkhra playing drums on this forthcoming tour because Morten was too occupied with other touring activity.

If you think a Europe Tour, we want to see your band in our country, thats all of our questions for now, if you want to say something to EXTREMINAL.COM readers and new members, just say it?
Hopefully we will swing by your country! Otherwise feel free to invite us, we would very much like to play as much live as possible.
Thanx for the interview guys, we hope you will check Poisoned Legacy out and follow us in the future. And always remember: When in doubt, just blast!
Toke over & out…