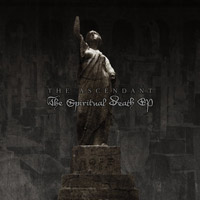 THE ASCENDANT’s debut EP was finally unleashed in April 2012 through Daemon Worship Prod, after countless delays. “The Spiritual Death EP” gathers 13 minutes of Transcendental Black Metal composed and performed by Daniel (EXCESSUM) and Lars (MARDUK) with the aid of K.W. (AD HOMINEM) on vocals. Conceptually dealing with Transmutation and Spiritual Death, it is somewhat ironic that this EP was recorded already back in 2007 and only now, half a decade of semi-constant movement and transformation later, it is ready to manifest. Beware! Black Metal shall not be reborn this time either. Released first as a 7”, to be followed by an MCD version at a later date.