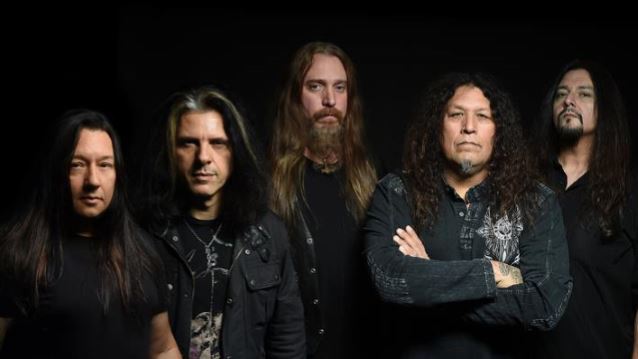 Vocalist Chuck Billy of San Francisco Bay Area metallers TESTAMENT has confirmed that the band’s forthcoming eleventh studio album will “definitely” be titled “The Brotherhood Of The Snake”.Billy added that most difficult part of making new albums for a band like TESTAMENT “is that we don’t live near to each other. We’re not like a normal band where we’re, like, ‘Oh, we’ll see you at the studio, we’re jamming tomorrow.” Alex [Skolnick, lead guitarist] lives in New York, Eric [Peterson, rhythm guitarist] lives in San Diego, and me and Steve [DiGiorgio, bassist] are the only ones that still live in the Bay Area. So when it’s time to rehearse or go on tour, they bring everybody in together to practice. It’s not the easiest way to write when we’re going through that stage. It’s, like, ‘We’re writing. Okay, everyone send in stuff through e-mail.’ That’s the hardest part of it, but I think it keeps us focused on the song a little more, so it has its ups and downs. I still like getting together and kicking around thoughts in the studio with the band.”