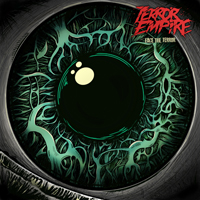 Hailing from the central region of Portugal, thrash metallers TERROR EMPIRE released their debut album, entitled “Face The Terror”, on June 15th.
The name “Terror Empire” represents an omnipresent reality that has been exposed worldwide since the 9/11 attacks. Since then, there has been an official and paranoid propaganda in order to stifle and deprive all human beings from their individual rights, so they can be subdued to the ubiquous feeling of terror. The band’s main focus has always been to produce a traditional “thrash metal sound” with traces of what has been part of the modern metal sound, such as odd time signatures, breakdowns and a bit of groove.
The recording process took place at the GMP Recording Studios from December 2011 to April 2012. Production was carried out by Rui Alexandre, and sound engineer Miguel Seco (Napalm Death, Robert Plant, Blaze Bailey, among others) was in charge of the mixing and mastering process.
Fans can download and listen the entire album by clicking here.
“Face The Terror” can also be purchased by sending an e-mail to the band on their official website: www.terrorempire.net/contact