French death/black metallers TEMPLE OF BAAL have announced the details of their 4th full-length album, entitled “Verses Of Fire” (cover below). The release is coming out on October 22nd in Europe and November 12th in North America via Agonia Records.
The band commented: “We’ve always seen Black Metal as the Sacred Music of the “other side”, and this album is Sacred to its very core. All its music and lyrics have been created after long hours of meditation and spiritual works. We are a Temple, a place of worship, and this aspect drips through each and every minute of those Verses Of Fire.”
Fans of the band can expect a fine blend between “Lightslaying Rituals”‘ (sophomore release, 2009) aggression and the last split CD: “The Vision Of Fading Mankind”‘s (2011) epic atmospheres.
Track-list:
1. το αστέρι 418
2. Bloodangel
3. Arcana Silentium
4. The 10th Aethyr
5. Gates Of Death
6. Gnosis Of Fire
7. Golden Wings Of Azazel
8. Lord Of The Raging Seas
9. Serpens Luminis
10. Walls Of Fire
TEMPLE OF BAAL is recommended for fans of old Vader, Angelcorpse, Mayhem, Destroyer 666, Razor of Occam, Thombs, Antaeus, Immolation and similar. 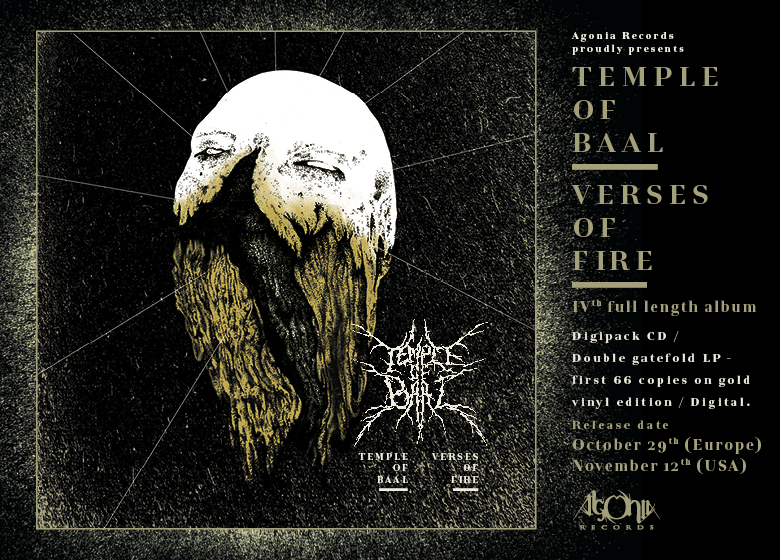 THE END-"You Made The Rain Disappear"