Hi Gerre, first of all, we thank you for your fast and humble answers. What do you and Tankard do nowadays, are there any new albums or concerts?
At the moment we play as lot as shows as possible and prepare for the next album we gonna record in September with the producer Michael Mainx. The next album will becalled vol(l)ume14 and will be out on December 17th via AFM records. 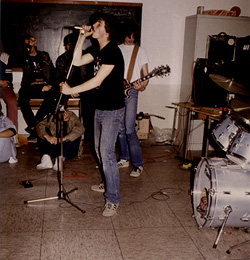 Let’s start with the past. In 80s, in the beginning of your musical career, you tried to get in the American scene, what is your popularity in the America now?
We really wanted to do the USA in the eighties but I didn`t work because we had time problems because of jobs, etc. nowadays we are just an underground band, we played only one show in the USA in 2006.

How was the athmosphere in your first concert in May 28, 1983, could you tell us about those days?
We played in a classroom of our school during a school fest, very funny. As we were not allowed to drink alcohol, we did put our beer into milk bottles, hahahaha………

In 1990, you released 2 split produce, did the idea come from the other bands? As I see some famous bands like Bathory,Coroner,Kreator were involved, who arranged those splits?
As far as I know these were promo singles done by our farmer record company, which splits do you mean exactly, because i`m a big collector of everything concerning our band, promo cds, sampler, bootlegs, etc. if there is somebody out who is the owner of such a stuff, please contact me, i´m willing to spend a lot of beer………….

Band’s name is German beer glass, that might have given some clues about your lyrics i suppose. What do you want to say about that? I read that you found this name randomly in the dictionary, is it right?
Yes, we found the name in the dictionary and it really fits to us, because we don`t take ourselves too seriously. We called our second demo alcoholic metal because of all the different metal styles coming out in the eighties, speed, black, thrash, poser, etc. we just did a joke out of it with this title. Since these days we really have this kind of image. In the nineties we really wanted to get rid out of it, but this really didn`t work, so today we really practice a parody of our own image! 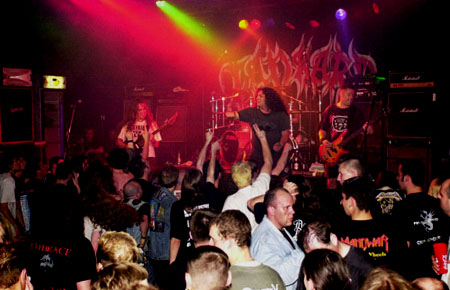 You gave many concerts, have been to many cities and countries, is there any interesting traveling memory or anything that made you laugh in concerts?Certainly there are, and we are curious about it.
We played an open air in the Czech republic with two different stages. Our bass player frank jumped from the stage in front of the audience and then he vanished for a couple of minutes but still kept on playing! We were searching for him but were not able to find him. He was so confused that he entered the second stage after his jump and was wondering he was alone on stage hahahahaha. I think he was a little bit too drunk! To tell you more funny stuff I would need t write a book for sure!

Except for Europe, where did you enjoy to play?
Japan and South America were really exciting, the fans were totally enthusiastic! But we really love to play everywhere, especially in countries we have never been to! 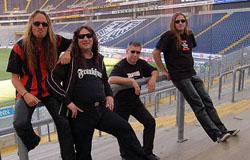 While I was investigating on your concert past, I saw that after the years you were starting to be popular you had given many concerts and tours, but between 1998-2000 you haven’t many concerts, what was wrong in these years?
At this time thrash metal was really out and we had not many offers to play live. In the year 2000 I got my tonsils out and after that operation I had a lot of problems with my voice so I had to stop for a while. But with the beginning of the year 2001 everything is going really better with tankard, so we are very proud never to give up!

Your fame is good in Frankfurt and I think you give little concerts before football games, how is the athmosphere in those concerts and what do you feel while playing in there?
We played twice in a football stadium with our song for Eintracht Frankfurt, especially our appearance before the cup final in Berlin 2006 in front of more than 70.000 people was one of the highlights in our history! I will never forget this three minutes when all the Eintracht-supporters where singing along with us!

To talk about football, what do you think the place of Eintracht’s position in Bundesliga?
At the moment we are in the midfield and had a very calm season, so I was not near to a heart attack like the last 10 years with all the up and downs. So i`m looking forward to play again in the European league one day! 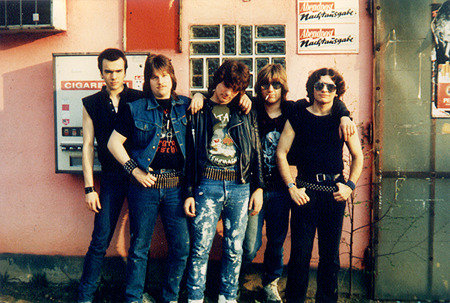 Your first meet was when you are 13 and Eintracht claimed UEFA,being together since childhood and keeping the band till now should be nice, what are the most and least liked manners of yours and your friends? For example, who farts most in the tour bus, who makes the most disguisting jokes?
Sorry but I am a supporter since 1975, when I was 8 years old I visited Eintracht the first time. Concerning the band: it is always a lot of fun to travel around with these guys, but our manager buffo is really the best farter! 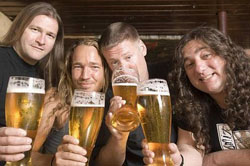 Your lyrics generally about alcohol and especially beer comsumption, why are you so obsessed with that issue?
As I told you before we don`t take ourselves too seriously and I see tankard more as a fun band. As we never were involved in a war a raped a virgin, we really can`t write songs about that topics!

A personal and funny question, how much beer do you drink to stay fatty?
I drink no alcohol, because tankard is just an image band hahahaha…….. (he must be kidding 🙂 – Cenk)

You generally have counter themes against popularity, fun, alcohol and the things you don’t like in TVs, some of the biggest problems of our world are fatness and obesity, I see paunchy man profiles in your clips and album covers, what do you want to say about obesity?
The guy on the kings of beer cover is a good friend of mine, so we put him on the cover to make a joke with the title, a parody of kings of metal of manowar!!! He lost more than 120 kilos at the moment and I lost 60 kilos in one year, to be too fat it`s not very good for your health, that’s for sure! On the next album there will be a song about weight watchers I promise!!!!!!! 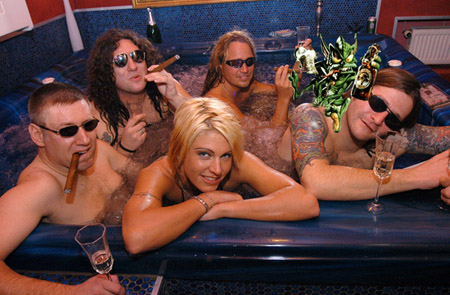 What do you think about new metal bands having handsome bastard vocals in the last years, is it visuality is important or planning of making fans via internet, or is it just coincidence?
Sorry I really don`t want to talk about other bands and how the look, because we are the most ugly metal band, nothing more to say! 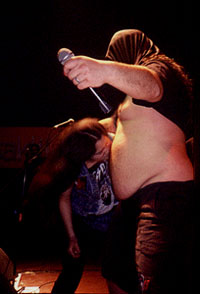 Talking about internet more,as a guy who lived 80s and 90s, what do you think about the bands which became widespread through the internet?In the old times, these kind of jobs were done through magazines and hand to hand demo casettes but now a 14 year old can type “metal” to the google and download what he sees easily, do you think that the music became more disposable or is it good that there are more metal listeners for the musicians?
On the one hand the internet gives a lot of chances to learn to know new bands and you can have contact with the whole metal world via internet, on the other hand the lot of illegal downloads damage a lot of bands, especially the small ones!

You have many fans in Turkey and your t-shirts are sold and we can see young metallers wearing them, do you have anything to tell to your fans?I think at your Rock Station concerts, a person kissed your paunch, what did you feel:)?
We played twice an turkey and the fans were very crazy, we enjoyed the concerts very much, great that the fans still believe in tankard, we try to give them back as lot as we have!!!! Say hi to the girl who kissed my paunch, I hope she survived it hahaha……..

You are the one of the bands I want to see in Turkey again, I hope we can see you live in Istanbul or another city again. How did it feel to play in Turkey, could you see the rest of the festival, what level were the Turkish bands to you?
Very great fans, good organisation and a lot of good bands, although I really can`t remember the names of them! If you want us to come back we really would try everything to come over. 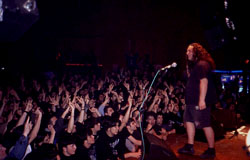 We are waiting another recording after your “Thirst” album, how are the preparations about the new album, will it be heavy as the others or do you think some changes?
We just have two songs ready, so we really have to hurry up to write new material. But tankard is a band who really needs this kind of pressure to write good songs, so i`m not really nervous at the moment! I think the next album will be different but still tankard old school thrash metal!

That’s all I want to ask, actually those are not all I want to ask, but I don’t want to keep you busy :), if you have any messages to us or our readers, tell them and we thank you for the interview…
We really would love come back to turkey to thrash together with you, thanx a lot for your great support during the last 28 years!!!!!