U.K.-based modern thrash heroes SYLOSIS recently completed work on their new album, “Monolith”, with Romesh Dodangoda at Monnow Valley Studio in Wales. The CD will be released on October 5 via Nuclear Blast Records. The cover artwork was created by Dan Goldsworthy and can be seen below. 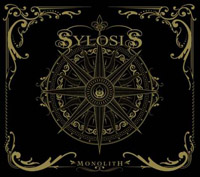 Commented SYLOSIS vocalist and guitarist Josh Middleton: “We’re beyond pleased with the artwork for ‘Monolith’. It needed to be something to accentuate the dark, gloomy vibe of the album without going for anything too cliché or stereotypically metal.
“We listen to a lot of ’70s progressive music and with the Art Nouveau style was quite popular at that time.
“At this point, we don’t want to reveal too much about the concept but one of the figures on the cover loosely represents the devil in disguise or a satyr. Some of the inspiration behind the concept came from Greek mythology.
“Working with Dan again was awesome. He’s very patient, eager to please and can very quickly tap into what we’re trying to put across.
“We always like to pay as much attention to the artwork as possible and it’s never been an afterthought for us. It’s about creating a complete piece of work so the music and the packaging really go hand in hand.”
Added Goldsworthy: “Visually, the cover artwork for ‘Monolith’ has taken notable inspiration from the Art Nouveau movement. Diverting from the usual flowery aesthetic of the style, ‘Monolith’ has a significantly darker vein running thoughout, as fitting with the sonic nihilism of SYLOSIS’ music. As far as the concept goes, it is merely my interpretation of the band’s vision. Much like their previous album, ‘Edge Of The Earth’, the artwork is completely related to certain themes running throughout the songs, so if you wish to extract any deeper meaning, I would recommend studying the lyrics as well.
“Josh and I kept a very close working relationship throughout the entire design process, such was the importance of having the artwork represent his lyrics and the story they tell. However, the cover art and illustrations throughout the packaging are only small snapshots of the bigger picture so open the booklet, press play and enjoy the journey.”
Middleton recently stated about “Monolith”: “‘Monolith’ is the best representation of us as a band in terms of our diverse influences and stylistically it’s what we’ve always been aiming for. A mixture of thrash, big doomy riffs and dark atmospherics and ambience.
“Overall, ‘Monolith’ has a darker vibe to anything we’ve done in the past, both lyrically and musically. It’s a concept album which is just something I like to help guide me writing the lyrics. I like the fact that I can write about personal issues but dress them up in a way that people might not know exactly how they relate to me (if at all in some instances).
“The idea for the concept was very loosely inspired by the Greek tale of Orpheus and Eurydice. It’s quite far fetched but it’s about this guy who loses his wife and tries to bring her back from underworld. This giant monolith starts to grow out of her tomb. The most prevalent theme beneath it all is sort of accepting that you might not be as nice a person as you once thought. It sounds really cheesy but everyone has a darker side to their personality in terms of being selfish, manipulative or dishonest.
“A lot of metal lyrics are always ‘you’re this, you’re that, you suck’ and in a lot of cases it’s probably really hypocritical. Some of the lyrics on this album are about owning up to those flaws and almost reveling in it.
“Some parts of the album is us covering new ground but everything that people have come to love about our band is still present. It’s not necessarily a change in direction or something we’re moving more towards, it was just about making a unique vibe for this album as a whole. There’s a real urgency to a lot of this material and the really natural and honest production helps mirror that. We really wanted more of a ‘live session’ feel. Both Romesh and Jens [Bogren; mastering] have done a great job in giving this album a unique sound. Too many bands these days rely on technology and it can just suck all the life and personality out of the music.”
Source: Blabbermouth.net

Raped by Pigs - Sores Of Affliction