Welcome to our zine Surtur, if i am not wrong, Surtur is the first band we have ever interviewed from Bangladesh. First of all, would you introduce Surtur to our readers, what Surtur plays and your musical way, your ideology etc ?
We feel honored to be the first band from Bangladesh being interviewed by you guys. And to the readers, we are Surtur and we play unadulterated thrash metal with some death metal elements. We keep our music raw, old school and most importantly, aggressive as hell. Our ideology is to stay true to metal and inspiring more people to take up the mantle of thrash metal.

The self released EP is called ‘Descendant of Time’ ,after that, you find a label ‘Witches Brew’ re-released your material in CD format,how does it connect with this label and this release reached more fans worldwide,how did the audience react to your songs ?
Witches Brew is a great label which we are proud to be a part of. Cheryl, the label owner is a very nice lady with a great taste in metal. Our drummer mailed her. She listened our songs. Then she got interested in signing us. Witches Brew has previously released albums bands like of Toxic Holocaust , Deathhammer, The Chasm, Gama Bomb and still releasing great records. It definitely spread our music to new audiences and we’ve been receiving a lot of orders from overseas as well. In short, audiences’ reaction been killer. We’ve had some killer reviews from various zines, Lots of radios played our tracks as well which makes us glad that it has reached a lot of ears.
Meanwhile The EP is still available at WITCHES BREW. It’s also available in various metal stores worldwide including Hells Headbangers Records(USA). People can get it directly from WITCHES BREW or from us as well.

Could you tell us more ,what the future plans for Surtur,new album,gigs,possible tour etc. ?
We are currently working on a full length album. We’ve been writing new songs relentlessly. We are also doing shows locally in Bangladesh and have toured internally. We are in talks with some promoters overseas for possible tours. We will announce the details as soon as the formalities are done. 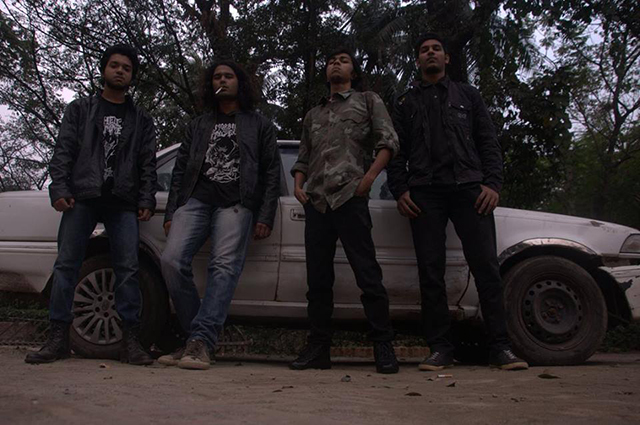 We are hearing some terrible news connected with political and terorist confrontations from all around the world,and unfortunately from your country,too ,could you tell us what ‘s going on there ? Is it hard to live islamic country and playing metal ?
There have been such shitty events lately in our country. But things have improved in the last few days and I think it’s quite safe here now. We’ve even toured under such circumstances without any trouble. But contrary to what’s happening in some middle eastern countries, we don’t get a lot of shit for playing metal in an Islamic country. People here are very lenient and more and more people are getting into metal. The things which happened were done by some stupid and radicalized Islamists. We don’t have a lot of such dipshits .

I ve heard some bands from your country but i can’t remember the names clearly,could you tell us how is Bangaladeshi metal scene and recommend some bands to our readers ?
Bangladesh has a quite bustling local metal scene. There are quality metal bands here like Severe Dementia and Orator who have toured overseas. Then there are Warhound, Morbidity, Nafarmaan, Enmachined, Exalter, Burial Dust, Dissector, Thrash, Homicide, NeKrohowl, Abominable Carnivore and a lot other sick bands who have quality released materials.

Would you introduce to us little about Bangladeshi culture and history ?
Bangladesh is a very small country just beside India. We have a huge population though. The country got independence from Pakistan after a bloody and vicious war back in 1971. We have a lively culture which is rich with literature, music and everything. Although rock and metal music have been seeing a rise in popularity in recent times but it is being practiced here since the 80’s, although in a much smaller scale. I’d say it is being infused with our culture very well with this generation.

– Beer or whiskey
A lot of BEER!

– Heavy metal or Thrash Metal (i know the answer, could you give your answer with fav bands?
Thrash/Death Metal mostly! And ofcourse I like Heavy Metal as well.
Favorite bands would include Old Sepultura, Slayer, Old Kreator, Sodom, Demolition Hammer, Razor, Merciless, Sadus etc.

– If you steal some cd which band would you steal ?
I’d rather not. Artists work hard to make these CDs.

– If you win the lottery what would you do ?
Buy some cool new gears for the band, a tour bus and start touring the world!

Thanks for answers and time,good luck with your musical career,tell us your last words ?
Thank you for taking our interview. it’s been an honor and privilege. Keep it metal. Keep it thrash!