For all who doesn’t know you yet. Please firstly introduce yourselves:
Jeff : We are SURTR, the bringers of doom from France. We were born in 2009 and we play a fuckin’ mix of doom metal subgenres because we like to play slow and to hear the bass roaring.
Julien: Jeff said everything, what could I add? We are a power trio in the “classic” sense of it. We’re three music fans before all, and we know each other for a very long time now. We just try to get as close as possible to our goal which is to make our own place in the music scene. 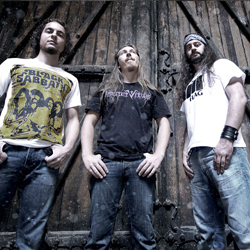 Whom do you want to reach with your music?
Jeff : I don’t give a fuckin’ interest in reaching people. I need to express myself and to share the sadness but also the rage which entered into me by living in this stupid world. Surtr reaches anybody who can feel what we are talking about.
Julien: I’ve never really thought about this. For the most part, we just try to express and satisfy ourselves by writing songs and playing them live. Of course it’s important to know that people are appreciating what we’re doing, and it’s very pleasant and rewarding to gain some kind of recognition through this. Personally I think that an audience of pure but open minded metalheads would be the perfect crowd to play for.
Régis: Personally I want to reach my own wellness. But if we can reach a handful of puritans either, that’s could be fun too!

You play Doom Metal, but you doesn’t adhere to the musical rules of the genre. This means you play multi-variant riffs also of other Metal realms and of the rock music. You also use additional instruments like for eyample the organ. Is this process of mingeling of old and new stylistic elements deliberately or did it develop more randomly?
Jeff : We don’t think about what we wanna do or how we wanna sound. Everything just comes naturally. This is the sum of what we are as a power trio. This is what Surtr is.
Julien: It’s just the reflection of what we are as individuals and the sum of our different influences. Thus it’s pretty natural as we don’t want to stay stuck in one little compartment only. Music is too rich and wide to restrain oneself to just one direction. Experimenting and exploring new options is essential to develop creativity and to keep interest and motivation inside a band. I couldn’t imagine myself playing the same riff again and again on every album.
Régis: I can play the same drum pattern for hours without getting bored of myself, just because it sounds too good. But Julien and Jeff need variations. It is also good to break the codes of the genres when it is possible. Doing what the others do is really simple to do, but that’s not what we want with Surtr. We try to develop our very own style in the doom metal subgenre. And we see it more like a true heavy metal style. That’s what doom metal is. 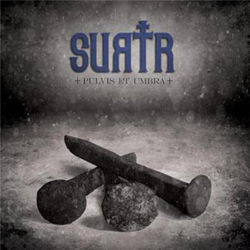 You recently published your cd “Pulvis Et Umbra”. Can you tell us something about its content (musically and lyrically)?
Julien: This album is the picture of what we were at the time we wrote it. It’s heavy, dark and slow, but original in its own way. It was a big progression after World of Doom and it was our first real “professional” release. So there’s still a lot of margin for improvement. This album is pretty varied although each song sounds like us, and this is also why I think that most “extreme” music fans can find something pleasing and appealing in it. It was a great pleasure to write and record it and we now really want to bring this out to the crowd by playing it live and loud.
Jeff: As in our first effort World of Doom, Pulvis et Umbra talks about a constant fight to survive in modern society. I always work through metaphors and similarities. For me it’s a way to write fancy lyrics mixed with daily life facts. So you can just take it as a story or you can also find some ideas which might make you remind your everyday life. The lyrics tell you how hard it is to build your “own space”, the “own world” your need to leave with serenity and to think you’re really living the life you want.

Do you have any role models?
Jeff: I never (and I never will) tell myself “I want to be like this band” or “I want to sound like this guy”. I seriously don’t give a shit. Of course we have many influences but we have no goal like becoming as famous as another band or playing the same kind of music that another one. We just walk ahead being natural, being authentic, being Surtr.
Julien: There are many bands that I appreciate, but no single one that I’d like to sound exactly the same. I prefer us to walk our own path. I’d like our band to keep its integrity, unity, passion and constant will to progress as long as possible. That would actually be my model as a band.
Régis: As I said, doing the same thing that other band is very easy, but not interesting. And they are too much various bands that we like; I even not know which band I would take. Trying to be our own model is the hardest way, but I think that’s the way each band have to think, because it’s the way musicians improved themselves. And thus the day maturity will come out of it, you’ll create your own style in pure integrity and maybe, if you’re lucky, you’ll make evolve the whole subgenre. 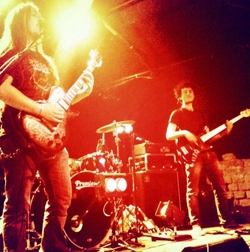 Are you in contact with other musicians / bands?
Régis: We try to be in contact with others bands, because that’s our chance to play outside our own region and to meet interesting people. It’s also the way to learn from people who get other experiences, to share and evolve. I think it is very important not getting egocentric and being open to others. I know so much musicians who believe that they are the best ones, that they play the must mind blowing music … in their own living room. That’s not why I want.
Jeff: For us, human exchange and communication is also important when we perform live. We’re not the kind of guys who just come, play and leave. We like to discover the other bands and people in the audience, to speak with them, to live something with them. It’s like travelling. Each meeting can bring something new to your mind.

Where do you see the band in five years?
Jeff: I can’t look that far in the future. Everyday is a new day and each day something new can happen. You can always have some dreams but don’t forget daily life sucks. So before the end of 2014 we’ll try to go back in studio to record our third album and we hope to tour a lot before that.
Julien: I can’t even imagine myself in 6 months, so you’re asking too much. However our main focus in 2014 will be the third album. It’s going to be a very exiting musical journey and probably one of the most important step in our evolution, both as a band and as individuals.
Régis: I just hope the goal we try to reach will be closer in 5 years and to be blossoming as a musician. 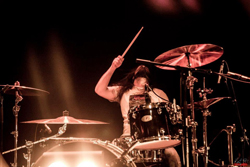 Will we see you in 2013 also live on stage? In case yes, where?
Jeff: First we’ll be in Lille (FR) on June 14th to support Dutch Stoner Doom Metal band Dresden/Leningrad, then we will perform a week after at the biggest and coolest French open air festival Hellfest Open Air, sharing the doom/stoner stage with Sleep, Cult of Luna, Procession and playing the same day as Candlemass, Down and Kiss. In October we’ll be in Rotterdam (NL) for the Dutch Doom Days festival XII and finally we’ll have a mini-tour in Germany in November. I hope more concerts will be booked until then.

Any last words to your fans and Extreminal readers:
Jeff: Keep supporting upcoming bands and if you like them, go to their shows, buy their CDs, help them to grow. You can entirely listen our new album Pulvis et Umbra on Spotify or Deezer, then maybe you will be interested in the limited transparent blue vinyl version or the CD. Keep spreading the world and being doomed by the giant’s sword!
Julien: Thanks for your support and the positive feedback. Come to see us on stage and have a drink with us! Keep supporting honest and dedicated music!
Régis: See you on stage and do not hesitate to ask us to play in your own town or your living room