Hi Davinia…How are you? How is everything in your side?
Fine!! Here, ready for your questions, shoot! 😉

Well lets talk about Spiritual Intervention…Tell me how did you gather and what have you done upto now?How is the band now?
Well, we started to cook the idea for the band in the summer of 2003 in Holland and we got together in the winter of the same year. I was the only Spanish member in the band, the rest was Dutch. We played live for the first time on a festival there called Metalways in the summer of 2004 and we did a small tour in Spain as well.
After all this I moved back to Spain with Arjan the present drummer, and we formed the same project with Spanish members in Madrid.

Is there any upcoming material? What will we see?
Yes, we will record our first album soon. We haven not thought about a title yet. Upto now we quickly recorded a demo for promotional use only. 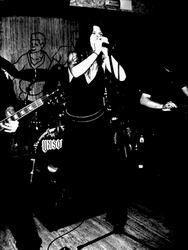 I must say, I like your music so that I will look for your albums here…How is your distrubition? Will I find your cds here?
We will check for all of this when we finish the recordings of the album and I hope you can find it there if we get a good deal.

However you are called death metal band,I know that you are not only into death….When I listen to your songs,I find some other materials in your music…So it makes your art special….What do you say about that?
Yea haha it´s always a nightmare for me when people ask me what style I play. I must tell you I have no fucking idea, hehehe… In our music you can find more than one style of metal, simply because I am not bounded to just one style … I like death, black, gothic, doom, progressive, experimental, etc. bands. For me the style is not important, neither if the music is complicated or simple, as long as there is coherence in the total picture. If the music sounds well to my ears and gives me some extra feeling I am satisfied!

You told me before that you had been in some stages in different countries….What was the atmosphere? And whats next?
Yes, as I said before, we played in Holland. The atmosphere was good. Anyway, the scene in Holland is pretty much the same as in Spain, but I think there are something is moving up.

What facts and bands are you affected most while making your music? What themes do you use in your lyrics?
I don´t think about any music while composing, I only sit down in a chair with a guitar or keys (or electrical triangle :):):):)) and wait till the feeling comes. All aspects of life are my influences, including death as part of life.

How do you keep your band alive?
Hehehe, working hard and rehearsing serious.

How do you feel about Spanish metal scene?
The scene is growing, it was a little bit asleep, but it´s waking up now!!

And about Turkey…What do you say about our country?..I know you are interested in some Turkish bands…
I have never been in Turkey, but people talk positively about it. I love traveling, so for sure I will pay your country a visit one day. About the bands… I always download new, unknown bands from the internet…which is the only place to find them. For example, like this I found Turkish underground bands, who impressed me. I mean, without the internet I probably never would have heard anything from them till now. Now I know that in Turkey the undergroundscene is just like in Spain and Holland, alive ;).

For Turkish metalheads,what do you say? How can they follow your art?
I would say they have to keep on supporting the scene, so metal stays alive. If all fans in all countries do this, bands like we will have more chances to grow and be known by for example Turkish fans as well. For now, the only way fans in Turkey and other countries can follow us is through the internet. At the moment we are busy designing an official website, but for now, people have to do with www.myspace.com/spiritualintervention

Thank you my friend….Nice talking as always….Good luck in your band and life…
The same to you. “Gracias” and “dankjewel”!!

New Stuffs In Our Distro