Polish Death Metal band SPHERE is going to release its second album titled ‘Homo Hereticus’ on 10th of February this year. The album, limited  to 666 copies, will be unleashed upon mankind by Masterful Records.

‘Homo Hereticus’ was recorded in ZED Studio by Tomek ‘Zed’ Zalewski in summer 2010.
The artwork has been created by the band’s vocalist in cooperation with Kaos who had also worked for Throneum, Christ Agony and Revelation Of Doom.
All samples and intros for ‘Homo Hereticus’ were recorded by Andy Blakk (Conquest Icon, Empheris) exclusively.
You can check two of the newest tracks from forthcoming album here: 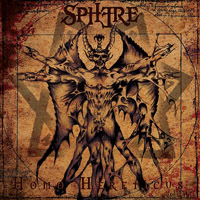