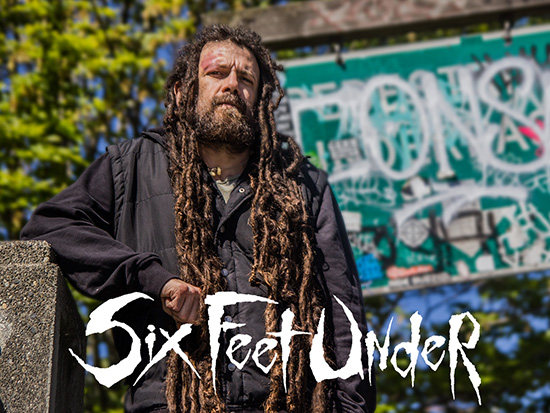 Death metal veterans SIX FEET UNDER have released a new album of previously unreleased material, titled “Unburied”, via Metal Blade Records. Produced by frontman Chris Barnes and mixed/mastered by Chaz Najjar at Badlands Recording in Denver, Colorado, the collection features nine tracks from the “Undead” (2012), “Unborn” (2013) and “Torment” (2017) sessions.
Barnes comments: “I feel ‘Unburied’ is something special and interesting to release that is different, being that this is our first digital-only release and the songs are all in their rawest and earliest form. It was also a shame for the songs to just sit there and go to waste; I knew the fans would dig them, and also everyone involved worked so hard writing and putting them together !
“Unburied” track listing:
01. Violent Blood Eruption (Savage/Barnes)
02. Midnight In Hell (Laine/Barnes)
03. Gore Hungry Maniac (Englund/Barnes)
04. Re-Animated (Englund/Barnes)
05. Intent To Kill (Englund/Barnes)
06. The Perverse (Arnold/Barnes)
07. Possessed (Arnold/Barnes)
08. As The Dying Scream (Hughell/Barnes)
09. Skin (Savage/Barnes)
New Lyric video ‘Gore Hungry Maniac’