Legendary death metal legion SIX FEET UNDER unveiled the first single from forthcoming studio offering, Undead. Slated for North American release on May 22, 2012 through Metal Blade Records, the 12-track recording was produced by Mark Lewis (Deicide, Devildriver) and mixed by Jason Suecof (Whitechapel, Job For A Cowboy), at Audio Hammer Studios in Sanford, Florida.
Comments vocalist/death metal ambassador Chris Barnes of the recording: “I’m in pretty much the best headspace I’ve been in since myself and [former guitarist] Allen West started this band in 1993. I’m super excited about the new record. It’s a rejuvenation; it’s a rebirth of SIX FEET UNDER, and fans will definitely latch on to my excitement and how focused I am in the lyrics I’ve written… The hypocrisies of daily life, things that affect us that spawn aggression, loneliness, sadness, there’s a lot of emotions going on across the record, and I guess that the dark horror that humans cause is my niche.” 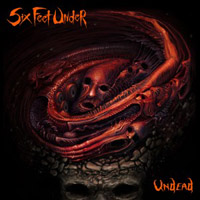