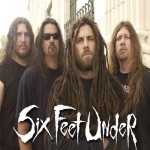 After the departure of Matt DeVries, who joined Fear Factory, US death metallers Six Feet Under have now announced that bassist Jeff Hughell, formally of Brain Drill and Vile, will be joining the band.
Vocalist Chris Barnes commented: “Six Feet Under is proud to announce our new member, bass player Jeff Hughell. He’s an amazing musician and I have been a fan of his work since first hearing Brain Drill a few years back. We feel with the addition of Jeff, all the puzzle pieces are in place and the killing machine known as Six Feet Under is now a true death metal force to be reckoned with! Prepare to be toe tagged and body bagged.”
Jeff Hughell stated: “I am honored to be the newest edition to the mighty Six Feet Under. This band is now a well oiled killing machine with Kevin Talley and my self as the rhythm section, Steve Swanson and Rob Arnold crushing guitars, and of course the man himself Chris Barnes killing it on vocals. The new material is the heaviest Six Feet Under songs I have ever heard and I can’t wait for the world to get their faces melted clean off by it. I would like to thank Mike Faley, Kelli Malella and the whole Six Feet Under family for thinking of me. It’s going to be one hell of a ride!”