Greetings Louis, We couldn’t talk much when we were in Turkey because of my poor English, now I would like to push you here a little harder 🙂 I hope you have relaxed at least a little bit after the Nervecell Tour 🙂 How was it?
Louis: The tour was great! All the crowds were very eager to absorb the Nervecell thrashing and we saw some wonderful sights and places while travelling around on our days off.
I never expected to go to Turkey but I’m glad I did. It’s a great mix in cultures! 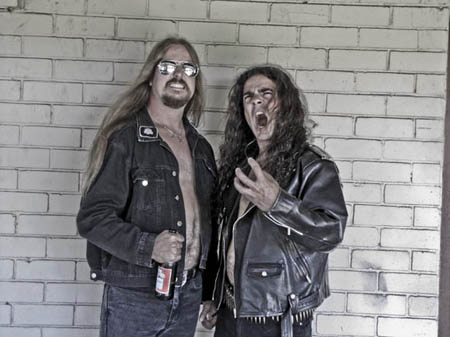 Let’s move on to my questions about Shrapnel. The band was formed in 1999 but the first album was released this year. Why did it take so long?
It took so long because it was always a side project for me and Andrew. We both have been very busy touring and recording with numerous other bands in the ten years since Shrapnel started, so it became something we vowed to complete one day when we both had time and energy.
There was always a great buzz and spontaneity to the songs (we thought) and we knew it would be worth releasing to the wider public. Even though we’ve been in so many bands over the years, we consider Shrapnel special because we were the first musicians, either of us had ever jammed with. Sort of like a first band. Very romantic! 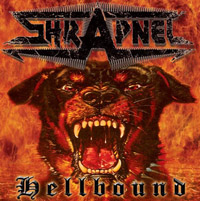 Can we say Hellbound is endeavoured in 10 years? There might be some other songs which are eliminated from the album, could you mention about the developments during the release of the album?
The album contains what we consider to be the eight best songs from the eleven we had written. The others generally weren’t as catchy or had nothing new to offer.
A bit of rehearsing was done over the ten year break but not much. We rehearsed for 2 weeks before recording the album, that’s it!
We’ve played many different styles of metal over the years but the way you hear Shrapnel on the new album, is the way we performed it ten years ago.
Raw, simple, fist in the face!

The album cover and your logo seems pretty old school. Who was behind that notion?
We don’t really consider it ‘old school’ in the ‘new’ sense, that it’s a thrash revival gimmick etc, it just looks that way because we are a bit older ourselves and the great metal that influenced us looked and sounded like that 18 years ago.
We aren’t trying to be new or original, we aren’t trying to get people ‘thinking’, we just play violent and gritty metal from the heart without any corporate agenda.

“Hellbound” is a great album especially in musical quality and production. It doesn’t carry any brand, so we wonder how it is distributed and how are people’s reflections about that?
At the moment we are unsigned and have been distributing CD’s outside our hometown independently for promotional purposes. 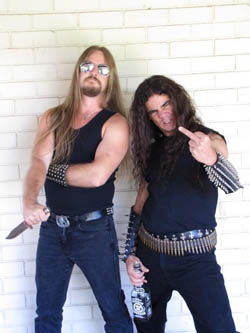 If any labels would be interested in offering our product to the world, we would be more than happy to negotiate a deal. Please contact us!!!!
It can be hard getting great record deals where we live because great labels expect their bands to tour frequently and promote the product. We live in the most isolated capital city in the world so it’s hard at this stage to afford frequent touring beyond Australia.
Having said this, we are in the process of negotiating some small distro deals in some foreign countries for the Hellbound album.
See our myspace page for further information!

Shrapnel, as a two-people-group, is pretty successful in recording. So we wonder your plans about live shows.
When playing live we get session musicians on bass, lead guitar, and drums. I just handle the vocals and Andrew plays guitar. See our video’s on You tube!!!!! We have only played one show as Shrapnel before but are planning more within Australia in the near future. Playing live is what I personally live for, especially with metal this wild and aggressive! When done well, it’s apocalyptic bliss!

Would you prefer to play drums or do vocals on the stage?
Probably drums because it’s what I’ve always done and it probably what I’m best at, although vocals is awesome to because you get to interact with the crowd a lot more and thrash about!
I did both at the same time in my previous band ‘The Furor’ see: www.myspace.com/westernterror for videos!!!

If I am not wrong Andrew also plays in another band; you have many bands also, how do you catch up with all your bands?
At the moment I play full time in Mhorgl, part time in Nervecell and Shrapnel.
I have a loose working schedule at home so I’m able to make the time to practice as much as need be, although I’m always eager to perform more. 7 days a week would be nice!
Music has been a priority for me since I was 14, everything else is just SLAVERY!!!! 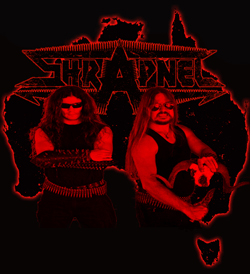 As experienced musicians, regarding the establishment of your former band Dybbuk long time ago, what would you like to tell us about the global and the Australian metal scene?
The metal scene in the larger cities of Australia is very healthy, it’s just a shame all the cities are so far apart, making frequent touring very expensive.
Every city has a wealth of talented bands in various genres, as quality as anything international I’d say, and there are a few good labels/distros spreading metal across our country.
See www.wf.com.au www.metalshopforums.com or www.ausmetalguide.com for links to some great Aussie bands.
Also, Soundworks touring has been doing a great job in bringing over international acts in the last decade, which has inspired many local acts to play harder and go further with their music.
Oh yeah, the fans are real friendly and supportive too! Hardly any wankers!
As for the global scene……it’s seems great! I think metal is going through a revival in popular culture at the moment so metal is working it’s way into homes once again!
There are too many bands to count! Festivals are getting bigger and selling out faster! Labels are breeding like flies! Metal heads are getting younger and younger!
I was very impressed when seeing the European festivals for the first time, wow!

We know that you are playing in different genres but if you were to choose between death, black and thrash metal, which one would you choose?
A very tough question for sure. I always like a blend of the three, refer to ANGELCORPSE!!
If I could choose only one, it would probably be Thrash. It has the energy, aggression, skill and ‘fuck off’ attitude I require!

Which decade was the best regarding the bands in the scene and their quality? 80s, 90s or 2000s?
I grew up with metal in the early 90’s onwards and I think that was an amazing period! Is that biased? In the 90’s I think everything became more refined and solidified. Production took a step forward, tech death came out, blast beats were mastered, guttural vocals became common, gore metal was born, the second wave of Black metal reigned supreme, controversy stirred……. 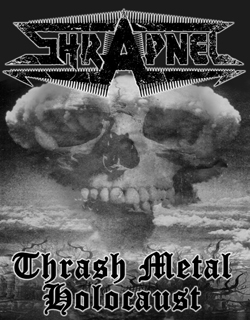 I do love the 80’s metal culture too though, and many 80’s bands. Too many to name!
As for the 2000’s great bands are coming out, but nothing is truly being reinvented. Metal needs a hero!!! Things seem to be over complexifing and moving away from the point I think.
I like my metal sharp, simple and timeless!

As a former alcoholic I really love the taste and fun of the alcohol. Would you like to share a jolly memory of yours about alcohol and music?
Back in the 1999 when we started Shrapnel, we would take our shitty rehearsal tape to every party we’d go to, drink as much as we could, seize control of the stereo, throw their shitty pop music in the trash, and play our demo at full volume while thrashing around the room and telling everyone how supreme our band was! Ha!
Ahhh alcohol…..

What is the short term plans of Shrapnel?
Promote of the Hellbound album, secure some decent distribution for it, whilst slowly putting together some new songs for another album attack! No deadlines. Also, we’re currently getting some new session musicians together for some local shows in the next few months.

That’s all from me, are there anything you would like to add? What is your message to Extreminal.com readers?”
Stay fuckin’ crazy and Thash til you explode!!!!!!
But really, think for yourself and believe in your dreams.
See our site for the best Thrash on the planet: www.myspace.com/shrapnelaustralia
Thanks to Extreminal.com and all it’s readers!

Thanks to Batu for questions translation