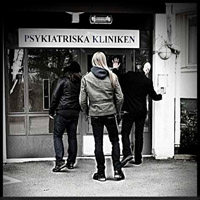 Commented SHINING founder and frontman Niklas Kvarforth: “The use of numbers to describe our albums is no longer something that SHINING is interested in doing.
“The new album is without a doubt the darkest thing I have ever done or heard. People will be upset, for sure — and hopefully its divine genius will destroy the lives of thousands.”
SHINING recently announced the addition of two new touring members — Euge Valovirta on guitar and Rainer Tuomikanto on drums.
Some of you might have already spotted Euge on SHINING’s previous gigs in Germany and Finland. Not only is he known to be one of the greatest guitarists in Finland, but, along with Peter Huss, he is also one of the most versatile players SHINING’s live touring has ever witnessed.
Rainer is mostly known of his innovative approach to drumming; combining elements of bombastic groove, hard-hitting solid beats and lightning-fast execution to unbelievably energetic live performances.
Rainer made his live debut with SHINING on June 15 at the Metaltown festival in Gothenburg, Sweden.
SHINING in May released an EP of cover songs with a choice of material that came as a surprise to many of the band’s fans. The four-track EP, titled “Lots of Girls Gonna Get Hurt”, includes tracks from KATATONIA, KENT, IMPERIET and POETS OF THE FALL.