Seth (drummer): We got kicked out by Earache, so we had no other option than to search for a new label to work with. We have a really good feeling with Season of Mist, and are glad to work with them. They did some awesome signings lately and the contact so far has been nothing but pleasant.

How was it like being on Karmegeddon Records from the change over from Hammerheart Recs?
By the time Hammerheart changed to Karmageddon, we thought it was a good time to move on. We did 2 albums for them, but also 2 for Earache.

Being that your an experienced band in choosing Record Labels for your musick, what is the three most important things you look for in a Label?
Distribution, promotion/press, good set of brains and knowing what’s going on in the scene nowadays."

‘Slaughtered’s’ art work is very cool, who did your art work and how much input did Severe have on it? 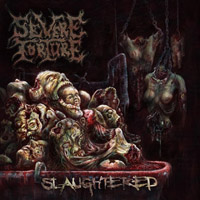 The artwork was done by Erik Visser. He did some awesome art for the dutch band I-Chaos, so we asked him to work for us. I think he was the one that came up with the actual setting of the cover, all we knew was we wanted a lot of corpses, haha.. From that point it’s a mutual process until the end-result is satisfying.

Did you visit any of Amsterdam’s Coffee Shops, while you were recording ‘Slaughtered’? If so, which ones do you find to have the most quality shit?
I never go to coffee shops in Amsterdam, coffee shops them are made for tourists, don’t properly dry their weed, etc etc…I prefer the farmer himself. Better come to the south of Holland if you want good weed. So I took my own box with me to Amsterdam, as always. I make my own hash, so no need to go to the shop for that either. It’s from a purity they don’t even have…

Recording at Split Second Sound Studios in Amsterdam, how did that go, what other bands have recorded there?
The recordings went really well. Drums and Vocals were recorded at Split Second Sound Studio’s, and the rest we recorded at Marvin’s home studio. The mix and master were also done in Amsterdam, with producer Jochem Jacobs. He is a really fanatic energetic guy, who got the right spirit in the band from the start until the very end. We are extremely satisfied with how everything went. Some other bands that recorded there are Cypher and In-Quest. 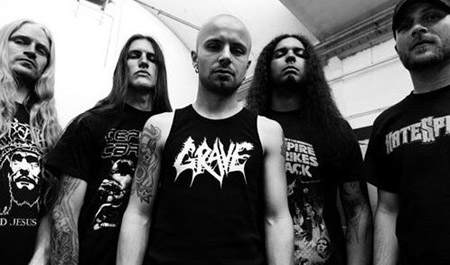 What’s the best thing about the Netherlands? How is the crowd reaction to your musick there in comparison to the United States?
It’s a different crowd, but we have good responses, depending on the day/area we are at. I think in the States it’s a little more wild, because in Holland, some people don’t find it so special to watch a band from their own country. The last time we played the States was in 2006, so it’ll be sick as hell when we return!

Overall, do you sell more material in the United States or Elsewhere?-if so, where.
I think we sell more in Europe, because that’s what our past labels have been concentrating on. 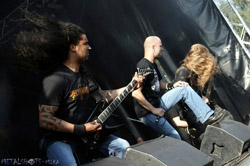 I really like the new release; ‘Feeding on Cadavers’, ‘Grave Condition’, ‘Unholy Misconception’, ‘Slaughtered’, & ‘Inferior Divinity’ I especially like them-what are your favorites off your new release & why?
That’s a hard one. Right after we recorded I had a few favorites, but now after playing it a few months, I really can’t tell. Kinda like Deride Jesus the most, it’s one of these marching killers that reminds me of early ’90’s death metal.

Are their any touring plans being made to support ‘Slaughtered’? Where do you hope to tour?
We are working on a few things now, but nothing concrete so far. I hope we can get back to the States again. It’s hard to get on a good tour and also to get things covered financially. We all have jobs that have to let us go as well. Another longtime wish is Asia and Australia. 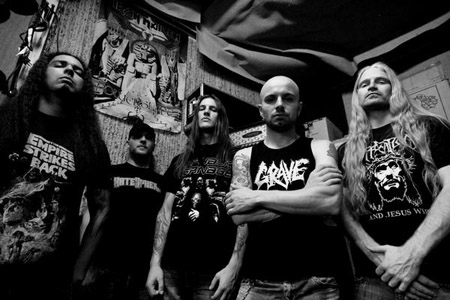 What bands do you hope to tour with?
There’s so many killer bands that I can’t answer that. As long as everybody has a lot of fun on tour. That’s the most important to us.

Well, good luck with your new release ‘Slaughtered’ & I hope to see you on tour!
Thanx for the support and keep it brutal !!! Cheers!