First of all we wish you will live a good experience in your musical career .How did you meet in Holland as four Brazilian young people and how Seita lined up and started ?
Thanks a lot for your friendly words and support!
Michel and Dom Mura were already friends in Brazil and started the band in 2007 in Amsterdam. Edson they met in Amsterdam. Andre came into the band after Edson got a tattoo (Andre is a tattoo artist as well) and informed if he liked to join the band.

You’re still a new and young band in the scene and released first material as called "Imprint Forever" ,how the people have been shown reactions to your band since begining and of course your release?
In general the reactions on our band and ´Imprint Forever´ are very positive. People recognize that we work hard and we receive a lot of support. 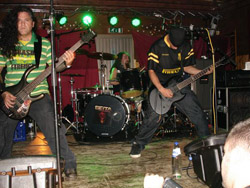 Seita described themselves a death/thrash metal as musical way on myspace but while we listen your EP, it sounds so groovy and core influences ,how you describe your musical genre?
We like to describe our music as Brutal Brazilian Metal from Amsterdam. Indeed, there are influences from all kinds of metal, but we prefer not to limit ourselves to say that we´re this or that.

How you met Danny O’Really who had worked with big and mainstream bands like Deicide-Biohazard-Napalm Death before, as i read your bio, you tell us "this is a point of a begining" ,what do u want to say about that?
Michel worked with Danny before with his other band and since this worked out very well, we asked him to work with us on ´Imprint Forever´. Danny is a great man to work with!

I realize you’d a some gigs in a local scene in your profile photos, how the supporters show reactions when you were playin?
Every audience is different. A lot of people go really crazy, others prefer to listen more quiet in their own way. We want to move people with our music and if this happens we reached our goal. 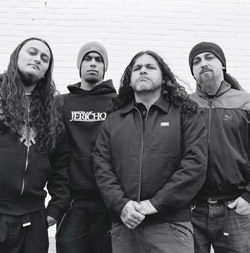 In the future what’s your aim for a Seita, underground or mainstream?
Our aim is to play for as many people as possible, to reach new people every day, but it´s not our aim to be mainstream.

How you feel about playing in your country ?As we see on tour date, you’ll have some gigs in Holland?
We enjoyed a lot our gigs in Holland. But as you maybe know, Holland is a small country, so that´s why we try to make a European mini-tour this year.

What do you think about Global Economic Crisis?
It doesn´t have a big effect on our work (yet). But of course people that like to go to concerts and have less money because they lost their job have to make a choice if they´re gonna see concert x of concert y. So it would be better if there was no crisis and everybody could spend more money.

You all from Brazil and so we can think that you must know football and are interested in ,whats your favorite team ?
Michel and Dom Mura are great Sao Paulo supporters and Edson supports Corinthians. Andre is less interested in football. And in Turkey of course Fenerbahçe (a lot of Brazilian players).

In the last years,we clearly see that world is going to warm in a global way day by day, do you have any comment of that?
Of course we´re worried like a lot of people on the planet, but it´s the politicians that should have to put this on the agenda and come with solutions. 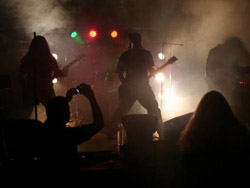 In the future what Seita will create ,thrash metal/core mostly or more extreme things?
We like the kind of music that we make but we´re always looking for new influences/styles, so we can´t tell yet. Just check our myspace from time to time to see what it´s gonna be.

Which one do u prefer to connect people ,Myspace or Facebook?
For bands Myspace is a very good communication space. We don´t use Facebook.

Which one do you choose , CD,Tape,Vinlys or MP3 ?
We still like to present our music on CD, complete with nice artwork, lyrics etc. that tells more about the music. MP3 is nice, because it´s easy to share music.

What do you think about online music,what it gains or loose?
It´s great that we can reach people in Holland, India, America, Turkey, everywhere, but the shadowside of online music (downloading) is that people buy less CD´s and that indirectly kills the music industry, because bands always need money to survive and produce new music. 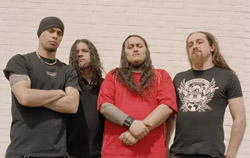 Which bands are you supporting in Holland or Brazil ?
We support a lot of bands, just take a look at our ´topfriends´ on myspace and you´ll see several names of bands.

At Least we can reach our last questions ,what’s your favorite drink (alcohol ofcourse)?
Caipirinha, a traditional Brazilian drink with Cachaça, lemon, sugar a lot of ice. Really delicious!

Thanks for answering my questions ,whats your last words to the fans and readers
We are proud to know your readers! We like to invite everybody to check our myspace (myspace.com/seitaofficial) and give a reaction on our music. One day we hope to play in Turkey and meet everyone of you there! Abraço!