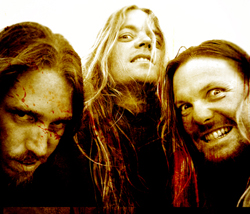 The band has reunited a couple of years ago and made a comeback album (“Out For Blood”)…
Jon Allen (drums): Yeah, you can call it that but since we’ve never really gone away we don’t consider it a reunion, although in the public eye it seems like we were gone. We just took a break…
A really long one, though.
Steve DiGiorgio (bass): But it was time, you know. This band is not about making an album every year or every two years. When the time is right we get together so that’s what happened.

Quality above quantity, that is?
Steve: That’s a nice way of changing it from laziness, ha ha! I mean, if we just force the issue and got together & made an album just to do it maybe it wouldn’t be as good as what we did. It only comes when it comes, you know. 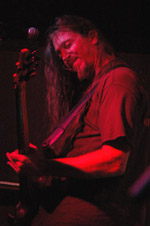 And what was the reason for the long break that you took?
Steve: There’s really no reason, it’s just kind of the way we are.
Jon: We’re friends first and a band second so we don’t push the issue of “hey guys, we need to put this out”. We hang out and and it kind of comes to us.
Steve: The reasons are very mundane, actually. I mean, I could sit here and tell you what we did over the years but it’s just normal life, really.

Can we expect another album from you?
Steve: We don’t plan on it happening and we don’t plan on it not happening. We’re just happy to keep playing right now. We just go little by little. If a new album is going to happen we have to wait for the right time. Actually, we’ve been covering the most distance in the world on this album than we’ve ever had. The response for this album has been probably the best. Maybe because we’re more behind it than we ever were. We’re older now. When we were younger, we thought things came a little more automatically but now we put more some energy into it.

How do you view the status of Sadus in the metal scene?
Steve: I think the problem with us is that when we first started we were before our time and now it seems we’re playing some kind of retro style. I don’t know when our time was.
Jon: Things might have been way better for us if we did those albums ten years later. Your speed and technicality is what made you so remarkable and outstanding. Do you know any bands from today’s scene that have been mainly influenced by Sadus and play something similar to your stuff?
Jon: I think there’s a lot of black metal bands that say they’re influenced by us. We met a lot of black metal bands touring all over the States and they said when they were kids they were buying our CDs and stuff.

Do you still keep an eye on what’s happening in the modern extreme underground?
Steve: A little bit. If something’s good it catches our ear. We don’t avoid anything new, we’re not against any kind of new sound. But we’re from a certain time and we favour stuff we grew up with more than the new stuff. But we listen to anything good, we soak it all in. 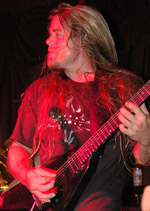 How much your mentality and approach to music has changed comparing to the early years of your career?
Steve: When we were young we thought this would be our life and we could live from it. Thn we grew older and learned that it’s a hobby for us. We have to keep it as something fun hat we do as an extra part of our lives. You get older & wiser and you learn that this is your escape from reality. This is not how we make a living, that’s not our whole life. That’s the reason for the breaks between our albums. We don’t live off of this so we have to survive first and we make music when we can.
Jon: That’s why we can’t say how long we can with it, because we do it for fun. You never know. We might be 55 years old and still putting out albums.

To what extent has the Internet changed the music scene?
Jon: Massive changes.
Steve: We were trading cassette tapes when we were young, putting it in the post and waiting weeks for it to arrive. Magazines were printed or photo copied, everything happened so slow… And now it’s instantenious. You can listen to a band in five minutes or so… A lot of young kids hear our name that’s part of the established underground but they’ve never heard us and now they can find out about us like that. It brings the world closer together for sure. Everybody worries about all this illegal downloading but me and Jon grew up together and we would take turns buying albums. Whoever bought the album made cassette copies for the other guys. So we were copying back then. It wasn’t like we were trying to cheat a band out of anything, it’s just the way it was. Everyone did that. Illegal tape trading is the same as illegal downloading so I think with the Internet, it’s on a grander scale. It kind of worries a lot of bands and it affects us too. I’m not saying we totally accept it but you can’t stop it. So it’s good as far as what I said earlier about searching a band and finding out about things but it’s bad because it can be abused and bands don’t really get compensated for their work.
Jon: I think it’s mostly record companies that are complaining because they aren’t selling any CDs now but they have to change with the times also. They have to figure out a new way so they can still survive.

What was the most exciting and challenging musical project that you’ve ever been involved in?
Steve: Well, you can represent a challenge in different ways. For me, it goes from extreme black and thrash to rock’n roll songs and ballads. You just should keep it fun and enjoy it.