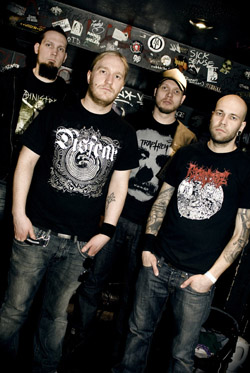 The album that all of us look forward to get; ‘Cycles’ ,gathered great interest. In 2008 we met the darker and chaotic way of you and we really loved it.think you still get positive response fort he last album. After the masterpieces such as‘Exit’ and ‘Murderworks’ was it hard to deal with ‘Cycles’ album construction?
Mika: Actually, no, it was quite easy to make Cycles album and we are really happy to that album. It was our first album that we produced ourselves. We wanted to but there more punk / hc stuff…d-beat..heh!! And we want to get more guitars and bass hight because "Exit" and "Murderworks" albums; in my option drums are way too loud..but still we like a lot those albums!

I wonder is there a secret lies on the consecutive successful albums such as Exit, Murderworks and Cycles ? Everyone is saying for you that ‘Grindcore back to it’s roots!’
Murderworks and Exit was recorded Mieszko Talarczyk at Soundlab studios. It was great to get there and work with Miezko! and of course we learned a lot of there! Great to see that grindcore is alive and going well..

After the last two albums, Exit and Cycles, you guys have separated from Spinefarm and agreed with grindcore masters Relapse Records. So do you think that,will it bring any change on your career?
Spinefarm was great but Relapse is more "Grind"..heh.. Relapse has so many good bands and they are awesome label and they can distributed more this kind of music.. 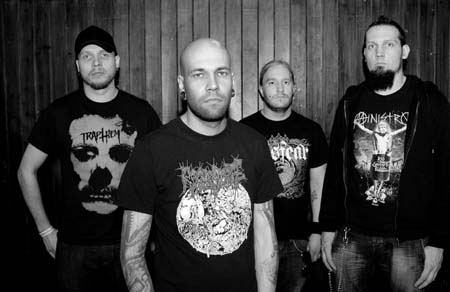 In the ‘Cycles’ album the new drummer Sami Latva joined the band and the reactions of the fans are really good. How is it going between you and band members? Will there be any changes on the members for the next album?
Everything went really easy because we know Sami already and know that he´s is great drummer! It´s always sucks if you need to change members..it´s takes lot´s of time and energy to rehersal again every songs etc.. Last autumn, after the gig with Disfear Toni (bassplayer) want to stop playing.. So, we need to find new bassplayer… And we find new member called Krisse! He just played four weeks european tour with us and everything went fine! He’s our sixth bassplayer and I really hope that we dont need to make any band member changes for while… 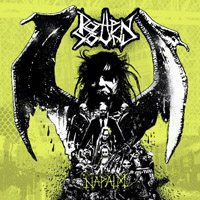 In 2010, the new ep ‘Napalm’ will be in our hands. Can you tell us a little bit, what is the story?
We wanted to relased something before the new album come. Napalm-EP is short EP with 3 new songs with 3 Napalm Death songs, but there is good bonus: Full live DVD with a full set from the Obscene Extreme Festival 2007. Napalm Death is so important band for us. I think that without Napalm Death we dont play this kind of music.. This EP is "Our personal tribute to everyone who ever participated in Napalm Death and also one hell of a ride through the early years of the leaders of this scene.”

So when the new album release date? Cause your fans don’t want to wait for it not even 3years. Do you guys have anything in mind? Will it be more extreme and chaotic than Cycles?
Right now we are working on a new album which is supposed to record in August and of course that will be come killer album! We have now 25 songs ready for that…short, fast and catchy songs!! If everything goes well producer will be Nico from Entombed! Studio will be same where we recorded also Cycles album.

Also each of you takes parts in many other bands such as Deathbound, Havoc Unit, Uttervoid is no longer with us but about your new band Medeia, how is it going? How is the ‘Cult’ reaction?
Yes, we all play some other shit too: Keijo plays Medeia, Sami plays Deathbound and Havoc Unit, Me and Krisse plays D-Beat Gangsters. I dont know how Medeia goes but right now they record new album. 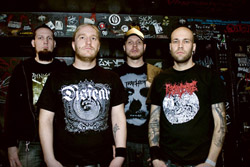 At the end of the april 2010 in Netherlands, you will be on the Neurotic Deathfest. How do you feel about it? I guess there will be also bands such as Six Feet Under, Napalm Death and The Red Chord…
Yes, Neurotic Deathfest was really awesome this year! Only bad thing was that we playing same time when Napalm Death plays…but room was still full and gig was really great! Lot´s of good band´s playing there etc.

Finland is a truly metal heaven. What kind of a feeling is it to be there? You must be happy because of the good reaction your fans give..
Yeah, Finland is really awesome Metal/Heavy country! Here is a big "Heavy Metal" festival´s like: Tuska, Nummirock etc. Lot´s of really great venues to play and Finnish audience is always awesome!

As the Extreminal team thank you for interviewing with us. Finally is there anything for you to say?
Thank´s for interview and we are waiting when we can come to play some grind to Turkey! Keep Grind!!