The anticipated new album from Norwegian Black Metallers RAGNAROK will be released on the 30th of October in Europe and on the 6th of November in North America.
Malediction is the title of RAGNAROK’s brand new album. When it comes to Norwegian Black Metal, RAGNAROK is one of the outstanding examples of what integrity and perseverance can bring to the genre. Since their inception at the beginning of 1994, the band has outlasted a multitude of variations and trends within the metal community that sought to influence the Black Metal genre. Eschewing avant-garde, nu-metal and even hardcore influences, the band remained true to themselves and to the traditions of Black Metal, whilst at the same time growing as writers and performers and refusing to become stale. Today, after 18 years in the business, RAGNAROK still play Black Metal in the classical style, and continue to significantly increase their fan base, having become internationally recognised exponents of the genre with six albums and high profile festivals and tours under their belts. With their seventh full-length album the group deliver the best there is in terms of dark and aggressive music. RAGNAROK does not need to re-invent the wheel – they just improve it.
Malediction was recorded, mixed and mastered by Devo of Marduk’s fame at Endarker Studios.
Full scale European, US and South American tours are planned for late 2012 and early 2013, including festival appearances. The band has already confirmed to play at Metal Legacy Festival (Saturday 27 October, Stromstad, Sweden) and to headline Messe des Morts Festival (Saturday 24 November, Montreal, Canada; first North American appearance of the band). More news to be announced shortly.
RAGNAROK is:
HansFyrste – Vocals
DezeptiCunt – Bass
Bolverk – Guitars
Jontho – Drums 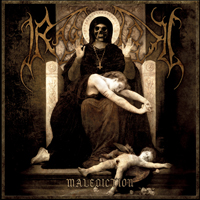