Swedish/spanish band PUTREVORE, formed by Rogga Johansson (PAGANIZER) and Dave Rotten (AVULSED) is currently immersed in the mixing process of their sophomore opus that will be entitled “Macabre Kingdom”.
Music was recorded during January/ February in Sweden, this time with the help of Brynjar Helgetun on drums, who already played for bands like CRYPTICUS, RIBSPREADER, THE GROTESQUERY… Vocals were recorded during the last days of March in Spain, so now everything will be mixed in Sweden and should be ready during the month of April.
Nine songs were recorded this time, eight of them will go on the album and one will be kept for some possible split EP with some rotting band if there’s a chance for that. 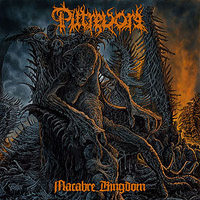 Tracklist:
01. The Mysteries of the Worm Part I
02. The Mysteries of the Worm Part II
03. Beyond Human Comprehension
04. Universal Devourer
05. Awaiting Awakening Again
06. The Morbid Mass of Swarming Entities
07. The Tentacles Through Time
08. Tattooed Skin Map
Cover art for “Macabre Kingdom” has been again done by spanish master Juanjo Castellano.
This new PUTREVORE slab of sonic putrefaction will be release through XTREEM MUSIC, although there’s not a definite release date for this album yet, but most probably it’ll be first released on 12″LP vinyl format around June and some months later, on CD format, so all vinyl freaks will get priority before any new generation ipod-consumer boy, who will have to wait before getting their cystal-clear digital bootlegged ethereal mp3.