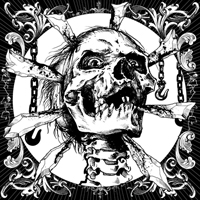 Mexican Death Metal fester-mob PUTREFACT have scheduled to enter studio soon to record another brand new EP entittled “Of Those Who Were Deceased”. This latest offering will feature two tracks of murderous and extremely unclean Death Metal in its most ancient style.
In an official statement by the band: “We are very glad to announce that Pulverised Records will spread our pestilence later this year releasing our 7” EP called “Of Those Who Were Deceased”